Bills believe they're improved since Week 6 loss to Chiefs 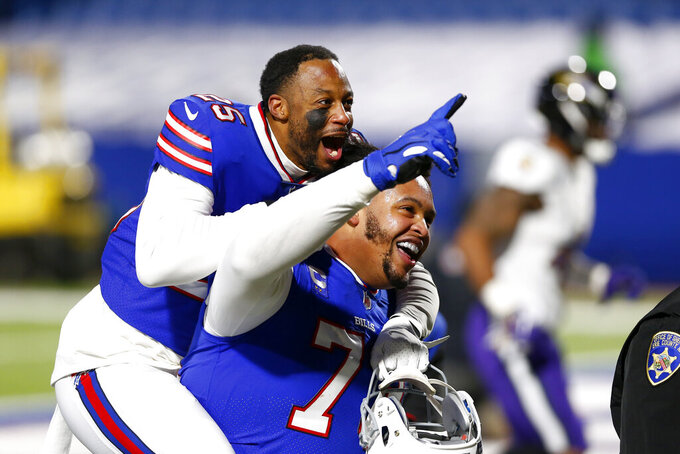 ORCHARD PARK, N.Y. (AP) — Quarterback Josh Allen spent the regular season leading the Bills to a franchise-record matching 13 wins and their first AFC East title in 25 years. Buffalo’s defense has done its part the past two weeks in getting the team to its first conference championship game appearance since 1994.

Both units will need to be much sharper than in a 26-17 loss to Kansas City in Week 6 if the second-seeded Bills (15-3) stand a chance of upending the top-seeded and defending Super Bowl champion Chiefs (15-2) in the AFC championship game on Sunday.

“Two good opponents, I know. But the minute losing gets easy, that’s not a good deal,” McDermott said following the loss, which came on the heels of a 42-16 defeat at Tennessee.

“We take it hard. There’s no moral victories,” he added. “We’ve got to really take a good look at our football team and be truthful with ourselves and say, `What do we have to get corrected?’”

Buffalo’s offense finished with a season-low 206 yards, with Allen managing 122 yards passing — the third-year player’s second-lowest total in a game he starts and finishes.

As for the defense, Buffalo successfully limited Patrick Mahomes to 225 yards passing, his third-lowest total of the season, and two touchdowns. The Bills were instead trampled by rookie Clyde Edwards-Helaire, who finished with a season-best 161 yards rushing.

McDermott defended his team’s defensive approach by calling it a “pick your poison” choice between selling out to stop Mahomes or Edwards-Helaire.

He might have to make the same choice this weekend with the running back expected to return after missing three games with an ankle injury. Mahomes’ status, however, remains uncertain after he sustained a concussion in a 22-17 win over the Browns on Sunday.

If there is a bright side, the Bills have grown progressively better, particularly on defense, in having won 11 of 12 since the loss and eight straight to match the team’s longest run since 1990.

Though Allen led the way with a three-touchdown outing in a playoff-opening 27-24 win over Indianapolis, the defense was the star in a 17-3 win over Baltimore on Saturday.

Aside from holding the Ravens to their lowest scoring output in 12 years, including playoffs, the Bills sealed the victory on cornerback Taron Johnson’s NFL playoff-record matching 101-yard interception return in the final minute of the third quarter.

Most important, the Ravens' dynamic QB Lamar Jackson was held in check, going 14 of 24 for 162 yards with just 34 yards rushing before being knocked out of the game with a concussion on the final play of the third quarter.

The outing continued a trend: Buffalo’s defense peaking over the final stretch of the season. After allowing 273 points through a 32-30 loss at Arizona in Week 10, Buffalo has given up just 137 over the past eight games. Johnson’s touchdown was the fifth scored on a return in Buffalo’s past six games.

The Bills' defense might have finished 14th in the NFL in yards allowed, after ranking among the top three the previous two seasons, but it remains a prideful unit.

Defensive end Jerry Hughes was thankful Buffalo had the late playoff game on Saturday. That way, he got an opportunity to spend the early afternoon hearing TV analysts dismiss Buffalo’s chances of containing Jackson and the Ravens’ NFL-best running attack.

“We took it as a challenge,” said Hughes, who sacked Jackson twice. “When we see the guys on TV talking about how they don’t play defense in Buffalo, we’re going to give up 30 points ... I think we went out there and we played like we had something to prove.”

Bring on the Chiefs.

The Bills' red-zone defense has clamped down, allowing just four touchdowns and three field goals in opponents’ last 11 trips inside Buffalo’s 20 over the past three outings.

Any semblance of a running attack after Buffalo called one running play in the first half against Baltimore and finished with one first down rushing. Buffalo's 32 yards rushing were the fewest in a win since gaining 31 in a 45-39 OT victory at Minnesota on Sept. 15, 2002.

Johnson’s interception return for a touchdown was his second in five weeks, after his 51-yard return put Buffalo ahead for good in a 26-15 win against Pittsburgh. Allen referred to Johnson’s TD on Saturday as being “a potentially franchise-altering play.”

4-0 — Buffalo’s record in the AFC championship game during its run of making — and losing — four straight Super Bowl appearances from 1991-94.

McDermott faces his former Philadelphia Eagles boss, Chiefs coach Andy Reid, for a third time since taking over in Buffalo in 2017. McDermott is 1-1 against Reid following a 16-10 win at Kansas City on Nov. 26, 2017.