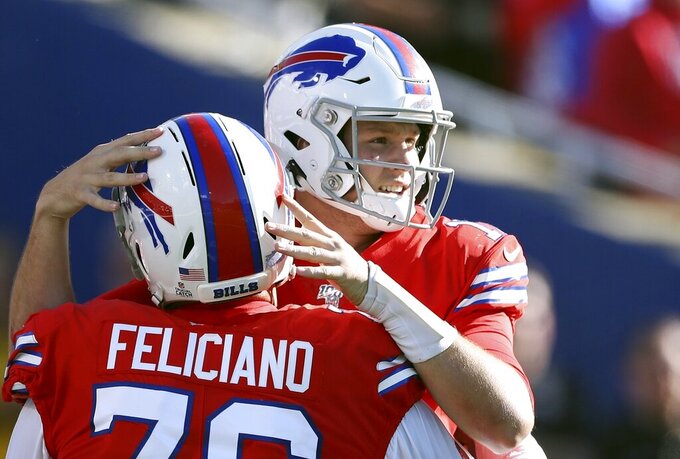 ORCHARD PARK, N.Y. (AP) — Jordan Phillips was the first to admit the Buffalo Bills didn't resemble one of the NFL's best defenses through 2½ quarters against the winless Miami Dolphins.

That changed when the defensive tackle dug in, burst through the Dolphins line and tackled Ryan Fitzpatrick for a 10-yard loss on first-and-goal from the Buffalo 2. One play later, Tre'Davious White made a diving interception at the 2 to spark a second-half comeback in which the Bills rallied from a five-point deficit for a 31-21 win on Sunday.

"We are the best defense in the league and we didn't play like it," Phillips said. "We decided to come back in the second half and do what we do, and that's what we did."

Though it took nearly three quarters, White put an end to any thoughts of the Dolphins pulling off a Fitz-Magical feat in what would have been a monumental upset for the 17-point underdogs.

White's two second-half takeaways, including a forced fumble in which he punched the ball out of rookie receiver Preston Williams' arms at the Miami 28, led directly to the Bills' slow-starting offense scoring two touchdowns and improve to 5-1 — their best start in 11 years.

White credited Phillips for making the tackle. Not only did it get the crowd going in the midst of a Dolphins' 16-play third quarter-opening drive, it also allowed White to get back on the field in an obvious pass situation.

"I ran rom the sideline and I jumped up with him," White said. "For him to make that play and then we come back the next play and get a takeaway, that's huge."

After settling for field goals on Buffalo's first three possessions, Josh Allen led a pair of touchdown drives, capped by 20-yard and 3-yard passes to John Brown and Cole Beasley.

And it took safety Micah Hyde to seal the win with 1:38 remaining by returning an onside kick 45 yards for a touchdown, one play after Fitzpatrick scored on an 11-yard run.

"It took a while into the second half for us to make some plays, but fortunately enough we did," Hyde said. "I'll take an ugly win over an ugly loss."

The Dolphins' so-called FitzMagic finally ran out in a game the 15-year journeyman put a real scare into one of his seven former teams.

Fitzpatrick put the Dolphins ahead 14-9 by leading consecutive 75-yard touchdown drives. Kalen Ballage put Miami up 7-6 by scoring on a 3-yard run, and Fitzpatrick hit DeVante Parker for a 12-yard touchdown catch with 5:51 remaining in the half.

He didn't let up in cutting the Bills lead to 24-21 with his touchdown scamper.

By the time it was over, the 36-year-old oversaw an offense that ended Buffalo's six-game streak of not giving up more than 17 points. And he finished 23 of 35 for 282 yards to become the first Bills opponent to top 250 yards passing in 14 games.

Though Miami (0-6) is off to its worst start since losing its first seven in 2011, Fitzpatrick's performance was an indication the Dolphins might not be as bad as they looked in being outscored 180-42 over their first five games.

"We've gotten significantly better from Day One to now, and we just have to continue in that trend," Fitzpatrick said. "We haven't won a game. Everybody knows that. But at the same time, we're making strides."

Fitzpatrick reclaimed the starting job from Josh Rosen a week after leading two fourth-quarter touchdowns drives and coming a 2-point conversion short in a 17-16 loss to Washington.

Allen finished 16 of 26 for 202 yards and produced his third fourth-quarter comeback this season, and fifth overall. His touchdown pass to Brown capped a 12-play, 98-yard drive that followed White's interception.

Coach Sean McDermott credited his players for having mental toughness for pulling out the win.

"You could see the look in their eyes at halftime that they were disappointed in themselves and what had unfolded," McDermott said. "And they were convinced they had to do something about it."

Dolphins defensive tackle Christian Wilkins was ejected for throwing a punch at Buffalo Bills tackle Cody Ford on the second snap from scrimmage.

White's interception came two plays after Miami successfully ran a fake field goal on fourth-and-1 from the Buffalo 4. Holder Matt Haack caught the snap and then scampered for a 2-yard gain.