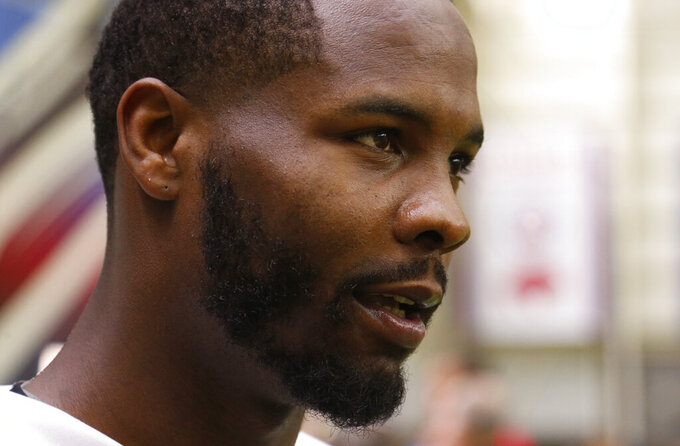 "I feel like I'm 21," Williams said, breaking into a wide grin Friday after spending the session with players six and seven years younger. "But I'm not worried about it. I'm just here to play. That's all I can do. Age don't matter."

Williams, whose first name is D'haquille, is in Buffalo attempting to make up for lost time in what could be his final shot to make an NFL roster.

"I wouldn't say this is my last chance. But I've made my mistakes, and I've learned from them," he said. "So it's always in the back of my head: 'Go get it. You ain't got no more chances to mess up.'"

Williams is referring to his well-publicized checkered past.

It's one in which he went from being considered a potential first-round draft pick to an undrafted free agent after being kicked out of Auburn during his senior year in 2015 following a bar fight in which he broke the jaw of teammate Xavier Dampeer.

And it was only after a brief and failed bid to earn a spot on the Los Angeles Rams' roster in 2016 that led to Williams spending the past two years confronting his shortcomings and rededicating himself to football by playing in Canada for the Edmonton Eskimos.

"Edmonton is always home for me because they gave me the opportunity at rebirth and to get back to where I need to be," said Williams, coming off a season in which he led the Canadian Football League with 1,579 yards receiving, and scored 11 touchdowns. "They will always have a place in my heart."

Williams is equally thankful to the Bills for signing him to a reserve-future contract in January. He chose Buffalo over about four other NFL teams because of how the Bills are rebuilding through youth.

"Everything's starting from the ground up right now, and I want to be a part of it," said Williams, who combined 135 catches for 2,294 yards and 15 TDs in 31 career CFL games.

At 6-foot-2 and 229 pounds, Williams showed he can use size to his advantage. A video of him being taunted at the line by Garry Peters and then bowling over the B.C. Lions defensive back went viral on social media last October.

These are qualities the Bills lacked last year in what had been a young and patchwork group of receivers led by Zay Jones and Robert Foster. Though Buffalo added slot receiver Cole Beasley and speedster John Brown in free agency, Williams is considered a legitimate candidate to make the roster after Buffalo failed to add a receiver in the draft last month.

However much competition there is for jobs doesn't faze Williams.

Coach Sean McDermott is aware of Williams' past, and likes what he's heard so far from the player. McDermott referenced a recent story published in The Buffalo News in which Williams went into detail discussing how he matured playing in Edmonton.

"I like the fact that he seems to have developed some self-awareness in terms of what went on a few years back, to where he is now, and knowing what he must do to prove his worth to people in this league," McDermott said.

Age and experience have led to Williams saying he's learned to be more patient.

"Don't rush nothing. Everything happens for a reason," he said. "My big, big, big, big emphasis is being humble. When I'm humble, it's like I'm at my best."

From Louisiana, Williams is literally and figuratively aware of how far he's had to travel to earn a second chance at an NFL career.

"Man, if you all could've went with me on that journey, you all would've known. But it definitely changed me," he said.

"Being away from home for those two years basically, I had to become a man. I had to grow," Williams added. "And now I'm more mature. And now I'm actually having fun with it. It's a blessing to be here."