Bills kick off NFL season playing up to high expectations 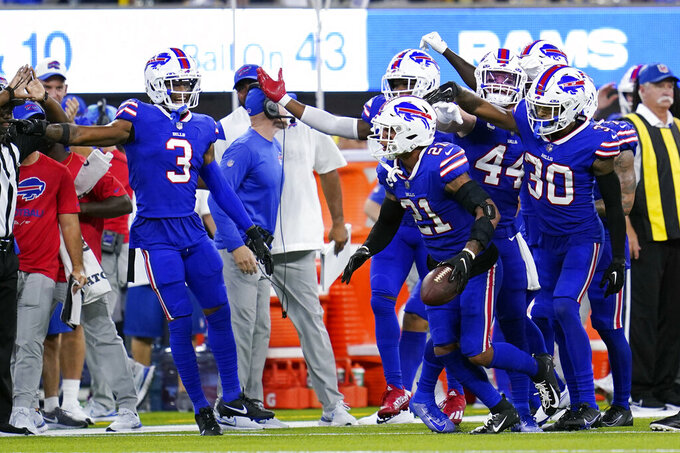 Buffalo Bills safety Jordan Poyer (21) celebrates after intercepting a pass during the second half of an NFL football game against the Los Angeles Rams Thursday, Sept. 8, 2022, in Inglewood, Calif. (AP Photo/Ashley Landis)

ORCHARD PARK, N.Y. (AP) — For one night — and a big one, no less — the Buffalo Bills played up to the weighty expectations many had hung on them this offseason.

Josh Allen was in command of an offense, which scored on three straight second-half possessions. Von Miller’s offseason addition invigorated a pass rush, which registered seven sacks. And the Bills shook off some early rust before thoroughly routing the defending Super Bowl champion Los Angeles Rams, 31-10, in front of a national prime-time TV audience on Thursday.

And yet, let’s remember, it was one game, or as coach Sean McDermott put it when asked about the Bills converting nine of 10 third-down opportunities: “Let’s not jump ahead of ourselves here.”

The two-time defending AFC East champion Bills were the better team in kicking off the NFL season by taking advantage of an opponent missing several key play-makers — including Miller — from the group that defeated Cincinnati in February.

What matters more is how the Bills will look come January, when the stakes get higher and opposing teams have had a chance to gel over the course of a season.

On the bright side, Buffalo players followed their coach’s lead in staying grounded.

“I wouldn’t say it was a signature win, I would say it’s the first game,” receiver Stefon Diggs said. “Because people win their first game, they could damn near lose every last one after that. So try not to ride that wave.”

At first glance at least, the Bills looked the part of bona fide contenders during an outing in which the only team that showed any capability of stopping Buffalo was themselves by committing three turnovers in a first half that ended tied at 10.

Rather than sag, Buffalo surged thanks in part to a defense that kept quarterback Matthew Stafford on the run to give time for the offense to regroup.

The offense was productive under first-time coordinator Ken Dorsey, who was promoted from quarterbacks coach after Brian Daboll was hired by the New York Giants. Buffalo generated 413 yards offense a year after topping 400 yards eight times and scoring 30-plus points nine times.

A defense that was inconsistent in generating a pass rush last season had a franchise season-opening high for sacks without having to rely on the blitz.

And Buffalo’s secondary, featuring two new starters at cornerback, mostly held up and was responsible for two of Stafford's three interceptions. While Cooper Kupp had 13 catches for 128 yards and a touchdown, the rest of the Rams combined for 16 catches and 112 yards.

“Of course it gives us a lot of confidence, probably even overconfidence,” receiver Gabe Davis said. "But we have to know we have to keep level-headed and keep pushing and keep working.”

The Allen to Diggs connection is working. Diggs caught eight of nine passes thrown his way for 122 yards, including a 53-yard touchdown, despite being covered most of the night by Jalen Ramsey. Perhaps, it was payback after Ramsey, while playing for Jacksonville, once referred to Allen as “trash” after the Bills selected the quarterback in the first round of the 2018 draft.

Not much needs adjusting, except someone reminding Allen and/or Dorsey to limit the number of quarterback runs especially with Buffalo leading by 21 in the final quarter. Allen took off on his own and stayed inbounds while being tackled on a 13-yard gain on Buffalo’s final drive with under seven minutes left.

As the NFL’s active leader in sacks, Miller’s stock was never down. But with two sacks, the 33-year-old showed he’s not lost a step and worthy of the six-year contract he signed with Buffalo in March.

Isaiah McKenzie’s debut as Buffalo’s slot receiver was spotty. Though he scored the go-ahead touchdown on a 7-yard catch, McKenzie’s inability to get his hands on Allen’s pass led to an interception on Buffalo’s second possession at the Rams 24.

90% — The Bills set a franchise record in converting nine of 10 third-down opportunities since the statistic began being tracked in 1973. Since 1991, only two teams have finished with the same or better third-down conversion percentage: The Chiefs went nine of 10 against Philadelphia last season and New Orleans went 11 of 12 (91.7%) against Detroit in 2008.

The Bills are back on prime-time for their home opener against Tennessee on Sept. 19. It’s a rematch from last season, when Allen was stopped near the goal line in the final seconds of a 34-31 loss at the Titans.