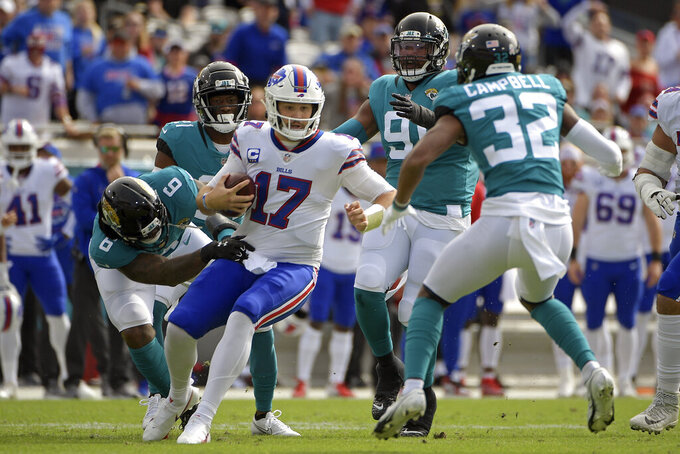 It began following a Week 1 dud against Pittsburgh, in which the fourth-year starter said he might have experienced first-game jitters. It happened after each of Buffalo’s two wins against Miami, in which the offense struggled generating traction in the first half of both outings.

And it was punctuated following a stunning 9-6 loss at Jacksonville on Sunday, in which an emotionally drained and hoarse Allen fully acknowledged he played lousy, though he used a much stronger word while apologizing for using a profanity.

What has also become apparent is how Buffalo's offense has become far too quarterback dependent at the midway point of this season.

The Bills (5-3) have lost two of three and continue searching for solutions to counter opposing defenses not giving Allen time to set up in the pocket. While two losses have come against AFC contenders, including Tennessee, the level of concern rises with a loss to a Jaguars opponent that had gone 1-21 over its previous 22 games.

Minus even a threat of a running attack, Allen became an easy target for a relentlessly attacking Jaguars defensive front, which sacked him a season-high four times, led to him throwing two interceptions and forced a fumble. The three takeaways came in the second half, with Buffalo’s two other possessions ending in a punt and Allen’s desperation incompletion to Stefon Diggs on fourth-and-16 — a play after he was sacked for a 9-yard loss — with 62 seconds remaining.

It was an overall dreadful outing for an offense already showing signs of cracks despite entering the game having scored an NFL-leading 229 points. Allen has accounted for 20 of Buffalo’s 25 touchdowns (17 passing and three rushing), not including Micah Hyde scoring on an interception return.

The Bills’ ground attack remained stuck in neutral, with Allen accounting for 50 of the team’s 72 yards rushing. It continued a trend in which the quarterback has combined for 190 of Buffalo’s 377 yards rushing over the past four games.

Buffalo’s over-reliance on Allen first became evident in a 34-31 loss at Tennessee on Oct. 18, when the quarterback lost his footing — and the offensive line allowed penetration — in failing to convert a fourth-and-inches at the Titans 3 in the final seconds.

While Allen has blamed himself, it might be time to shift the focus on an offensive line which continues to be outmuscled at the point of attack, similar to how Buffalo lost to Tennessee and Kansas City twice last year.

Coach Sean McDermott essentially alluded to that concern Monday in stressing the Bills need to be more physical.

The Bills maintain their hold atop the AFC East, but their margin has dwindled to a half-game ahead of — you guessed it — New England (5-4), a team they still face twice this season.

The one bright spot has been been the improved play of a defense which, aside from the loss at Tennessee, has held up its end while covering over many of the offense’s deficiencies. Buffalo has held six of eight opponents to less than 300 yards offense, including Jacksonville, which finished with 218.

Third-down defense. Opponents have not converted 50% of their third-down opportunities in 12 straight outings.

Red-zone offense. Over the last five games, Buffalo has scored 10 touchdowns and nine field goals and stopped on downs once in 20 drives inside an opponent’s 20.

DE Jerry Hughes forced running back Carlos Hyde’s fumble at Buffalo’s 20 with 1:33 left in the first half.

RG Cody Ford, filling in for injured starter Jon Feliciano, showed little to regain the Bills confidence after he lost the starting job earlier this season.

The Bills have been relatively injury free, and getting healthier with TE Dawson Knox (broken hand) and rookie RT Spencer Brown (back) expected to resume practicing after each missed two games. Feliciano, however, will miss at least two more games with a calf injury. The status of RB Zack Moss and CB Taron Johnson is uncertain after both were sidelined by concussions Sunday.

23 — Buffalo’s streak of games in which it generated 20 or more first downs, which ended with 17 against Jacksonville. The streak was the NFL's longest since New England had a 24-game run spanning the 2016-17 seasons.

It will be time to hit the panic button in Buffalo if the Bills falter in traveling to face the New York Jets (2-6) on Sunday.