Bills' pass rush steps up in dominating win over Dolphins 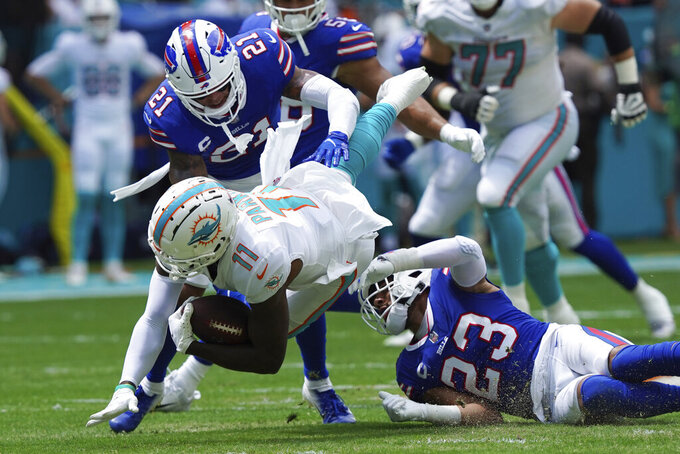 ORCHARD PARK, N.Y. (AP) — No matter the down, from first to fourth, the Bills’ retooled pass rush showed it can pack a punch.

Beginning with cornerback Taron Johnson’s sack on the opening snap, Buffalo’s defense set the tone in what became one of the unit’s most dominating performances in five seasons under coach Sean McDermott. Just as important, the 35-0 win over the Dolphins on Sunday served as an early season signal of the Bills' intent to be the aggressor after being pushed around for parts of last year.

And much of the credit goes to coordinator Leslie Frazier for letting his so-called dogs out early, and often.

“Fraz’ was dialing it up, man,” safety Micah Hyde said. “There were a few times we came off the field and I was dabbing Fraz’ (Translation: it’s a gesture of honor) just because it was excellent calls, mixing it up, sending guys.”

Hyde’s fifth career sack, and first in five seasons with Buffalo, forced a Miami three-and-out on its first possession. Five plays into Miami’s next drive, A.J. Epenesa knocked starter Tua Tagovailoa out of the game with a rib injury when the quarterback was hit while releasing an incomplete pass to Jaylen Waddle on fourth-and-2.

The Bills finished with six sacks, three coming in the first quarter to match the second-most in the opening 15 minutes since at least 1994.

Though Buffalo had one six-sack outing last year in an 18-10 win over the New York Jets in October, the production against Miami reflected the offseason emphasis the team placed in shoring up a pass rush which finished tied for 15th in the NFL with 38 sacks and 23rd in quarterback pressures.

Rookie first-round pick Greg Rousseau had a team-leading two sacks, while Epenesa was credited with nine quarterback pressures, tied for the third-most in an NFL game since the start of the 2020 season. Epenesa was Buffalo’s top pick in being selected in the second round of the 2019 draft.

Buffalo forced three turnovers, including a muffed punt, stopped the Dolphins on all four fourth-down attempts and didn’t give up a point on Miami’s three trips inside the Bills 20. Add it up, and the Bills earned their first shutout since a 16-0 win at New England on Oct. 2, 2016, when Jacoby Brissett — who replaced Tagovailoa, on Sunday — started for the Patriots

Take away a blocked punt returned for a touchdown in a season-opening 23-16 loss to Pittsburgh, and the Bills have allowed a combined 16 points and 468 yards offense in two games. That’s an encouraging step up from a unit which allowed 17 or more points 15 times and 450-plus yards five times last year, including three playoff games.

Quarterback Josh Allen’s difficulty finding a rhythm a year after breaking numerous single-season team records for passing and scoring. Allen finished 17 of 33 for 179 yards with two touchdowns and an interception against Miami. Overall, he’s completed just 56% of his attempts (47 of 84 for 449 yards) a year after finishing fourth among NFL starters in completing 69.2% of his attempts.

“Just finding some comfortable plays that he entire offense likes,” Allen said. “There’s some things that we need to do better communication-wise, and it starts with me.”

Rousseau made his presence felt in his hometown return, and after opting out from playing at the University of Miami last season for COVID-19 reasons.

LB Tremaine Edmunds did not finish the game after experiencing cramps. DE Efa Obada did not play due to a calf injury.

10 — The Bills have combined to score TDs on 10 straight drives inside the Dolphins’ 20 over their past three meetings after going 4 for 4 on Sunday.

McDermott prepares to meet one of his mentors, Ron Rivera, with the Washington Football Team hitting town Sunday. The Bills coach spent six seasons working as Rivera’s defensive coordinator in Carolina before being hired by the Bills in 2017. Rivera was also Frazier’s defensive teammate on the Chicago Bears’ famed 1985 Super Bowl-winning team.