Bills running back McCoy using his doubters as motivation 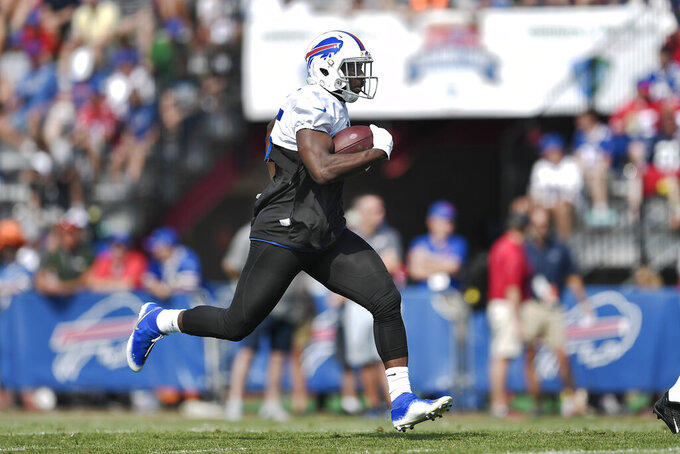 PITTSFORD, N.Y. (AP) — Question LeSean McCoy all you want for having lost a step now that he's on the wrong side of 30 and coming off his least productive season.

The Buffalo Bills running back says he won't hold it against anyone when proving them wrong.

Insisting he's still "The Guy," McCoy ended an offseasonlong silence following the Bills' final training camp session Tuesday by saying he's heard all the doubts, and using them as motivation.

"It's kind of weird. Since I've been like 9 years old, I've been the top guy so it's even weird to hear stuff like that. But I mean, it comes along with it," McCoy said.

"I guess that's just how it is. I'm fine with that. I know who I am. I know how I play. And my teammates know that. So I mean, we'll see on Sundays," he added. "And the one thing I won't do, I won't even bring it up. So if somebody here says something about me, I won't bring it up to you. It'll be like I never heard it."

McCoy, who has previously acknowledged not being thrilled to celebrate turning 31 last month, has plenty to prove entering his 11th season and fifth in Buffalo.

Speculation of McCoy's status was further fueled this offseason, when the Bills restocked their backfield by signing Frank Gore and TJ Yeldon in free agency. And then Buffalo used a third-round draft pick to select Devin Singletary, whose shifty style drew comparisons to McCoy at Florida Atlantic.

"It's no different. Just guys in the backfield to help me out," McCoy said of the added competition. "I'm the guy. I feel like that. That's what I've been told. And that's my every day approach."

He then dismissed a question over the possibility of being traded before the season begins.

"I've seen that. But for the last two years, people have been saying that," said McCoy, who is entering the final year of his contract. "If that was the case, I would've been gone."

The Bills have publicly backed McCoy.

Asked about "the outside noise" of trade speculation, Beane said, "There's not any inside noise," and chalked it up to the media having nothing to report on while the team was off.

"When Sean and Brian Daboll roll the ball out, LeSean's going to be the first running back to touch the ball," Beane added, referring to coach Sean McDermott and Buffalo's offensive coordinator.

McDermott on Tuesday said he's liked how McCoy has handled the added competition.

"I think he's off to a good start. His attitude's been great," McDermott said. "And I look forward to watching him continue to get himself ready to go for the season."

McCoy has worked exclusively with the starting offense through camp, and has reeled off several impressive runs. The next step comes Thursday, when the Bills open the preseason by hosting Indianapolis.

McCoy spoke with a calm, confident voice, and said he's learned his lesson from last year when he brashly shared his objective to reach the 12,000-yard plateau to solidify his place among the NFL's greats.

He couldn't even break the 11,000-yard mark, and enters this season ranked 25th overall and third among active players with 10,606 yards rushing.

"When you kind of focus on the numbers, the yards, you kind of don't get it where you want it," he said. "I think the first goal is just to make every rep, make every play count, work hard and win games, and the other stuff and stats, they'll follow."

He's also aware of how mercurial the media and fans are when it comes to production.

"You have a bad two games and then you have three hot ones, and you're the man," McCoy said. "No matter what goes one, they'll look for the guy with name or the money. So it kind of motivates me."

Not all of Buffalo's running struggles could be pegged on McCoy. The Bills were introducing a rookie quarterback in Josh Allen, which led to opposing defenses focusing on stopping McCoy. Buffalo also featured a patchwork line after center Eric Wood and guard Richie Incognito unexpectedly retired.

The Bills have retooled their line by adding seven newcomers, including rookie second-round draft pick Cody Ford. And they've upgraded their group of receivers, too, by signing Cole Beasley and John Brown in free agency.

McCoy is impressed by the additions, and said Beasley and Brown will not only help the passing attack, but also open space for the running game.

The addition of Gore was welcomed by McCoy, because they're close friends and spend the offseason working out in Florida.

"I'm excited, knowing it's a challenge and everybody's talking about the backs and the new additions, but I'm challenging myself," McCoy said. "I look to be the best player every snap. So I take the challenge for myself."