Blitz-happy Dolphins will try to slow Mahomes and Chiefs 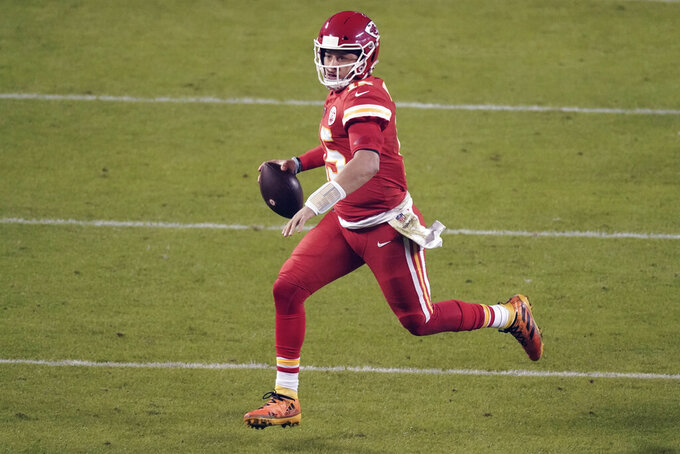 Kansas City Chiefs quarterback Patrick Mahomes (15) runs in the second half of an NFL football game against the Denver Broncos in Kansas City, Mo., Sunday, Dec. 6, 2020. The focus is on the matchup between Patrick Mahomes and Tua Tagovailoa, even though there’s no debate about which quarterback is better. The Miami Dolphins might have the superior defense, however, which lends intrigue to Sunday’s game against the Kansas City Chiefs.(AP Photo/Charlie Riedel, File)

MIAMI (AP) — The focus is on the matchup between Patrick Mahomes and Tua Tagovailoa, even though there’s no debating the Kansas City Chiefs have the better quarterback.

The Miami Dolphins might have the superior defense, however, which lends intrigue to Sunday’s game against the reigning Super Bowl champions.

The Dolphins (8-4) have allowed the second-fewest points in the NFL, and wins in seven of the past eight games have vaulted them into contention for their first playoff berth in four years. But they're stepping up in class against Mahomes and the high-scoring Chiefs (11-1), who have already clinched a postseason spot by winning their past seven games.

“I wish we could have 14 defenders,” Miami coach Brian Flores said.

Sometimes it seems as though the Dolphins do. Flores' blitz-loving, ball-hawking scheme has produced at least one takeaway in 18 consecutive games, the longest such streak in the NFL, and cornerback Xavien Howard leads the league with eight interceptions.

The question is whether the Dolphins can disrupt the Chiefs, whose eight turnovers are tied for the fewest in the NFL. Mahomes has thrown two interceptions in 463 passes, the league's lowest rate.

And he tends to burn blitzes.

“We always want to be aggressive. It’s an aggressive game,” Flores said. “So we’ll see how the game unfolds. We’ll have a plan going in. Oftentimes that plan has to be adjusted.”

Flores ran the New England Patriots' defense in 2018 when they beat the Chiefs twice, including in the AFC championship game.

“Brian is a great defensive mind," Chiefs coach Andy Reid said. "When we were in the championship game, he was the one calling them. So he knows that thing backward and forward, and you can see it. You can see it in how those guys are playing. They play hard, aggressive, definitely maximizing everything he’s got there.”

Flores' memory of those 2018 games isn't entirely favorable, because Chiefs scored 40 and 31 points despite losing.

HANGING ONTO THE BALL

First-round draft pick Tagovailoa is 4-1 as the Dolphins' starter. They've reached 30 points only once in those games, but his ability minimize mistakes complements Miami's stout defense.

“He knows how to manage the game and manage the situation,” Mahomes said. "That’s something that I wasn’t that good at my first year. That veteran kind of mental mindset that he has, I think it’s truly special at this time in his career.”

Tagovailoa is the third quarterback in the Super Bowl era to not throw an interception in his first five career starts, joining Dak Prescott and Kyle Allen.

Mahomes has become one of the best in the NFL at drawing defenses offside, using hard counts in mostly empty stadiums to force a penalty. And he may have no comparison when it comes to using free plays to his advantage. His go-ahead touchdown pass to Travis Kelce against Denver on Sunday was the latest example.

“I try to use cadence as much as possible,” Mahomes said. “Quick cadence, hard counts, whatever it is, just to get an advantage in any single way, and the offensive line does a great job of sitting in there, really paying attention, and we work on it throughout the week.”

The Chiefs had failed to score a touchdown on seven straight trips inside the red zone before Kelce’s 20-yard scoring catch last week. That included a couple of instances in which the Chiefs reached the 1-yard line, but were thwarted by better defensive line play and their own offensive miscues.

“We all own a piece of the pie,” Reid said, “but I can get the guys a better chance if we do some different things there. But we’ll get that worked out. I can’t give you exactly the things, but I will tell you I can do a heck of a lot better down there for them.”

For the first time in franchise history, the Dolphins started three rookie offensive linemen last week, and they'll likely do it again.