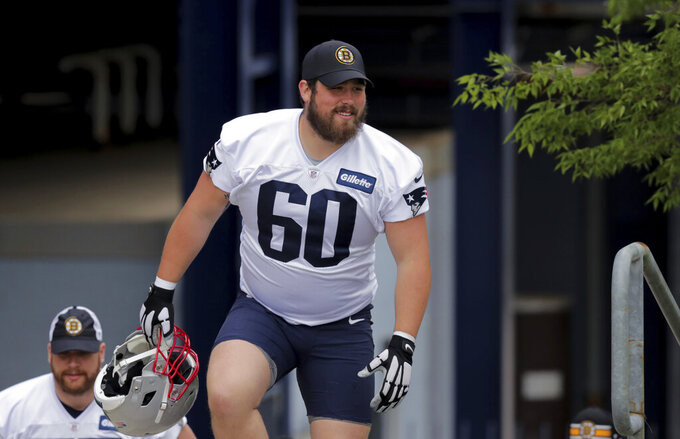 FILE - In this May 23, 2019, file photo, New England Patriots center David Andrews (60) heads to the practice field during NFL football training camp in Foxborough, Mass. With time growing short before their season opener against the Pittsburgh Steelers, the Patriots suddenly have an unexpected hole in the middle of their offensive line following the weekend hospitalization of starting center David Andrews because of blood clots in his lung. Andrews, 27, was released from the hospital Monday night, Aug. 26, 2019, according to the Boston Globe. (AP Photo/Charles Krupa, File)

FOXBOROUGH, Mass. (AP) — With time growing short before their season opener against the Pittsburgh Steelers, the New England Patriots suddenly have an unexpected hole in the middle of their offensive line following the weekend hospitalization of starting center David Andrews because of blood clots in his lung.

Andrews, 27, was released from the hospital Monday night, according to the Boston Globe. He was at practice Tuesday, standing on the sidelines in street clothes and chatting with teammates, but did not participate.

"It was great to see him, definitely," starting right tackle Shaq Mason said. "But we've got tremendous confidence in any guy that steps on the field because we've gone through situations like this before."

The team has not released a statement on Andrews' situation, nor has it confirmed his medical condition. Andrews' hospitalization was first reported by The Athletic, hours after Patriots coach Bill Belichick's news conference Monday.

Belichick was not made available to the media on Tuesday.

Andrews, a fifth-year veteran who joined the Patriots as an undrafted rookie free agent out of Georgia, has started 57 of the 60 games he has played. After seeing limited action in 2015, he beat out starter Bryan Stork to start the 2016 season and was named a team captain in 2017 and 2018.

Andrews missed the first few days of practice in training camp this year because of an undisclosed injury, but he gradually increased his participation before playing 28 snaps at center in the Patriots' preseason game against Carolina last Thursday.

The Patriots already are dealing with attrition along the offensive line. Second-year veteran Isaiah Wynn is likely to replace Trent Brown, who left in free agency, at left tackle. Otherwise, an experienced unit composed of Joe Thuney, Andrews, Shaq Mason and Marcus Cannon was seen as a positive in the effort to protect 42-year-old quarterback Tom Brady.

The most likely candidates to replace Andrews for an extended period of time are a pair of fourth-year veterans, Ted Karras and James Ferentz. Karras has played in 45 games with five starts and Ferentz in 23 games with no starts.

"Those are going to be coaching decisions," said Karras, whose great-uncle was former Detroit Lions great Alex Karras. "I'm just going to come in here tomorrow and work my hardest and try to do anything I can to help the team."

Karras said he spoke with Andrews during his visit to practice.

"Obviously, he's a big part of the team," Karras said. "He's been a leader for us for a long time now. Just having him around is a big plus for our unit and our team."

The Patriots close the preseason at home Thursday against the New York Giants.

"We got what we got," Patriots offensive line coach Dante Scarnecchia said Monday. "The cavalry, they're not coming over the hill. But we have good players. I like the guys we got."