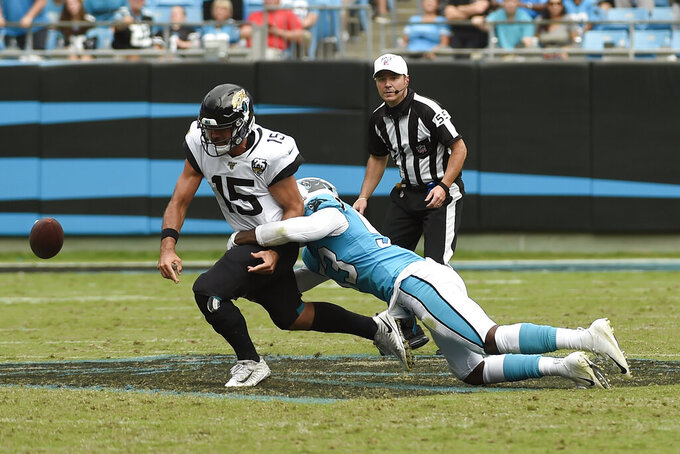 JACKSONVILLE, Fla. (AP) — Jacksonville's defense is no longer elite, with or without star cornerback Jalen Ramsey.

The Jaguars (2-3) have too many holes and too much inexperience on that side of the ball to be considered one of the NFL's best. They're allowing 23.6 points a game, tied for 19th in the league, and have been gouged by every non-division team on their schedule.

It was Christian McCaffrey's turn Sunday. He had 237 yards from scrimmage and three touchdowns in Carolina's 34-27 victory , including an 84-yard scoring run. Backup Reggie Bonnafon added 80 yards on the ground late, including a 59-yard score. Both running backs went untouched on their long runs.

The Panthers finished with 285 yards rushing, the second-most Jacksonville has allowed in franchise history. Rookie linebacker Quincy Williams got juked badly on one of McCaffrey's runs and eventually benched.

Jacksonville's defense was stout against Houston and Tennessee, but those are AFC South opponents that players and coaches know well. The unit also has one takeaway in five games.

Ramsey's return could help, although he wouldn't have provided much assistance Sunday considering Carolina did most of its damage between the tackles. The disgruntled defender, who requested a trade nearly a month ago, saw a back specialist in Houston on Monday. It's unknown whether he will practice Wednesday.

Next up is New Orleans (4-1), which has won three in a row against the Jags.

Chark caught eight passes for 164 yards and two touchdowns at Carolina. The second-year pro has scored in four games this season and had one called back in the other.

Minshew threw for a career-high 374 yards, but lost three fumbles that led to 14 points.

Still, he put Jacksonville in position to tie the game in the final seconds.

"When stuff like that happens, sometimes you don't give yourself a chance to win," he said. "That's what I feel like we did, what I did."

Jacksonville's offensive line has to be revamped in the offseason.

Guard Andrew Norwell is the team's most expensive player, getting paid $13 million this season and counting $16 million against the salary cap, but he's a liability. Norwell got bulldozed into Minshew early in the second quarter, causing a fumble that was returned for a touchdown. It's the kind of missed block that's become routine for one of two guards in the league being paid $13 million or more in 2019.

Leonard Fournette has consecutive 100-yard rushing games for just the second time in his NFL career, and he's broken long runs in each of the last three games.

The third-year pro finished with 108 yards on 23 carries against Carolina, a solid encore after running for a career-high 225 yards at Denver last week. A year after missing eight games because of injuries and a suspension, Fournette looks more mature and in better shape. He's made runs of 69, 81 and 48 yards the last three weeks.

Rookie linebacker Quincy Williams missed more tackles than he made against the Panthers and ended up giving way to Najee Goode in the second half. The Jaguars love the speedy third-round draft pick and plan to go back to him this week.

Tight end James O'Shaughnessy tore the anterior cruciate ligament in his left knee at Carolina and will have season-ending surgery. Rookie tight end Josh Oliver, still recovering from a significant hamstring injury, could be on verge of making his NFL debut. Safety Ronnie Harrison left the game with a neck injury and later returned.

102 — the number of points Jacksonville has surrendered in its last three games against the Saints.

Find a way to amicably end the Ramsey standoff, whether it's by trading him, putting him on injured reserve or getting him back on the field.