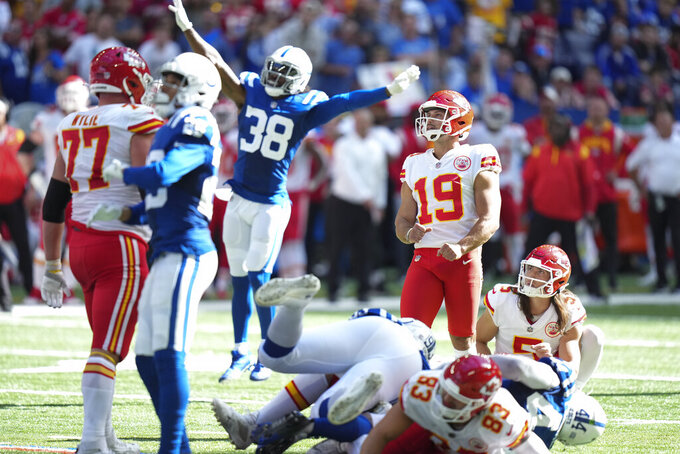 The truth was there were plenty of head-scratching moments Sunday as the Indianapolis Colts rallied for the go-ahead touchdown with 24 seconds left to steal a 20-17 victory in their home opener.

“It (stinks), man,” Jones said when asked about the unsportsmanlike conduct penalty he drew on Indy's final drive. “It was third down, we got off the field, defense fought hard and I kind of put us in a situation to get back on the field. And then we got scored on, and that sums up the game. So, I’ll take that one. It was my fault. It was definitely my fault.”

Jones thought he was simply having a conversation with Colts quarterback Matt Ryan and didn't know what drew the flag. Ryan said he wasn't sure, either.

According to a postgame pool report, referee Shawn Smith explained the call was for abusive language toward an opponent and additional details would be included in the crew's game report. Either way, the result was the same — an extended drive that led to the loss.

But it wasn't just Jones.

From Skyy Moore's muffed punt at his own 4-yard line to another misplayed punt that resulted in Kansas City being pinned inside the 1-yard line, Sunday's game was full of missed opportunities.

Yes, the Chiefs converted a 2-point pass just before halftime to erase Matt Ammendola's missed extra point. But they couldn't overcome Ammendola missing a 34-yard field goal to the left, setting up the Colts' final drive.

Or the fake field goal Reid called for on Kansas City's previous possession. Instead of potentially extending the lead to 20-13 with a 42-yarder, Tommy Townsend's pass fell incomplete.

“That’s one I probably shouldn’t have called,” Reid said. "In this league, the parity is crazy so any mistake is magnified. But we thought we could get it.”

Mahomes wasn't happy, either, when the Chiefs (2-1) decided to run out the clock before halftime instead of trying to score again. It resulted in a brief shouting match between the quarterback and offensive coordinator Eric Bieniemy before Reid broke it up.

But Mahomes was more upset with the Chiefs' inability to finish drives. In four red-zone trips, only two resulted in touchdowns and both came after turnovers deep in Colts territory.

Otherwise, it was a field goal kind of day.

“As an offense, we’ve got to make it where those little mistakes don’t cause a loss,” Mahomes said after going 20 of 35 for 262 yards, one TD and his first interception of the season. "We have multiple chances to get in the end zone. If we get in one time in the second half and don’t stall out at the goal line, we win the game.”

Perhaps even more frustrating was that it all happened against a foe still reeling from last week's embarrassing shutout at Jacksonville and still seeking its first win. This time, though, the Colts (1-1-1) took full advantage of Kansas City's miscues.

“We still have a lot of improving to do and what I’ve found throughout my career is usually you find ways to get better throughout the season,” Ryan said. “But you’ve got to find ways to win till you get there.”

The Colts did just enough Sunday.

Kansas City, meanwhile, will spend this week looking for solutions after losing for just the third time in Mahomes' 16 career September starts.

“I didn’t think I said anything vulgar or disrespectful, but I just can’t say anything within the heat of the moment,” Jones said. "The game is changing, so I have to evolve to the game.”