Bolts’ season on brink after more close-game woes in Mexico 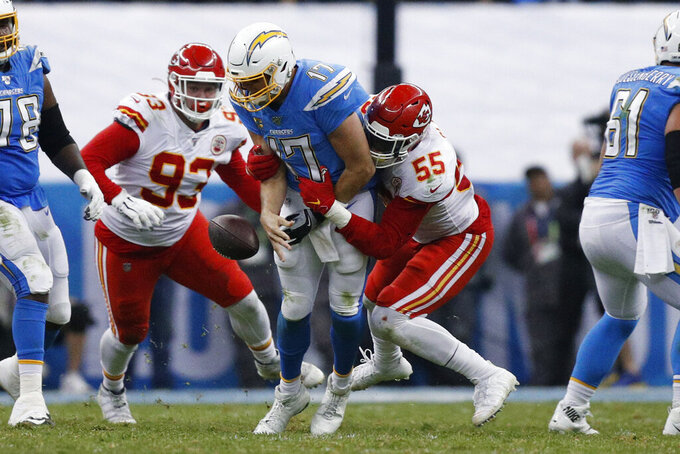 MEXICO CITY (AP) — No matter the opponent and no matter the country, the Los Angeles Chargers’ offense just can’t seem to score consistently when it really counts this season.

Another poor offensive finish at Azteca Stadium on Monday night sent the Chargers into their bye week at 4-7 with a 24-17 loss to the Kansas City Chiefs.

But the Bolts’ seven losses have all occurred by seven points or fewer, adding another chapter to the maddening history of close defeats that this franchise brought to Los Angeles nearly three years ago.

After two seasons of relative success in close games under coach Anthony Lynn, the Chargers have slipped back into a rut in which they’re simply not good enough to win down the stretch. Los Angeles is 2-7 in one-score games this season after going 7-1 last season in games decided by eight points or fewer.

“Not scoring in the red zone, turning it over — man, that gets you beat,” quarterback Philip Rivers said after his first four-interception game since 2016. “That’s what’s gotten us beat all year.”

The Chargers’ capitulation was particularly painful in Mexico City, and not just because the taste of it will linger through their bye week.

Los Angeles allowed just three drives longer than 30 yards by Patrick Mahomes and the Chiefs, but the Chargers’ offense couldn’t catch up in the fourth quarter while the defense shut out Kansas City in the final 19 minutes.

After the Bolts’ first two fourth-quarter drives went just 24 yards and resulted in two punts, Rivers threw interceptions on the final two drives. His reckless heave toward Andre Patton was picked off with 4:13 to play, and he ended the Chargers’ desperate 77-yard final drive with an underthrown pass to Kansas City safety Dan Sorensen near the goal line with 18 seconds left.

At least the Chargers moved the ball on their final drive, unlike in their disastrous finish in Oakland the previous week. It didn’t make Los Angeles feel any better.

“Offensively, you’ve got to get the ball in the end zone,” Lynn said, noting the Chargers’ four field goal attempts off five lengthy drives during the first half. “A team like Kansas City, you can’t kick field goals. You’ve got to score. I felt like we let them hang around.”

The Chargers are only hanging on the periphery of the playoff picture after this loss. Their AFC West schedule continues next Sunday, Dec. 1, with a trip to Denver, but Los Angeles would need an excellent finish and big-time help to earn a second straight postseason trip.

Even after this heartbreaker, several Chargers put on a proud public face about their hopes.

“Yes sir,” pass rusher Melvin Ingram replied when asked if Los Angeles could still make the playoffs. “We’re still the same team, no matter. Whatever has to happen will take care of itself. All we can do is line up and fight every week.”

Los Angeles is failing despite a defense that hasn’t allowed 28 points by any opponent this season. Gus Bradley’s unit has survived major injury issues to keep the Bolts in every game, and it ranks fifth in the NFL with just 317.5 yards allowed per game. The powerhouse Chiefs managed only 310 yards and two significant TD drives.

Rivers’ 16-turnover season is the most glaring problem. The Chargers’ starter in every game since 2006 is playing without both of his starting offensive tackles, but that doesn’t explain his wildly inconsistent throws even with strong protection. While he ranks second in the league with 3,169 yards passing, his 15 TD throws are tied for 13th — and his 64.4 percent completion rate ranks 18th among quarterbacks with at last 100 attempts, even with his propensity for checkdowns to running backs Austin Ekeler and Melvin Gordon, who have 83 combined catches. He is just 45 for 83 with seven interceptions in the Chargers’ past two games, both close losses in which the offense couldn’t finish late. The Chargers’ season would look much different if Rivers looked like his best self.

It might be too late to help, but All-Pro safety Derwin James could be back after the bye. James worked out on the field at Azteca before the game, and he could be ready to return at Denver after missing the entire season following foot surgery last summer.

Normally solid returner Desmond King muffed two punts and didn’t make a return against the Chiefs. Lynn said King was bothered by Azteca Stadium’s relatively soft lighting. Although the Chiefs didn’t recover any of them, the Chargers fumbled three times in total.

With their playoff hopes all but dead, the Chargers must decide whether it’s worth activating James or fellow safety Adrian Phillips, who broke his arm. They would also benefit from the return of Russell Okung, their high-priced left tackle who has missed two straight games with a groin injury. He has played just two games this season after missing the first seven due to a pulmonary embolism.

47½: Sacks by Ingram after he sacked Mahomes and passed Junior Seau for fourth place in Chargers history. Except for a couple of exceptional scrambles, LA’s defense contained the vaunted Mahomes, holding him to 182 yards on 19-of-32 passing. Rayshawn Jenkins even made an athletic grab on Mahomes’ second interception all season.

After a much-needed bye, the Chargers must keep pushing forward and hoping this offense finds its stride in the red zone under new play-caller Shane Steichen. Their trip to Denver is a chance to get even for an embarrassing home loss earlier this season to the then-winless Broncos (3-7) while keeping their slim postseason hopes alive.