Boone upbeat about Yankees' bid for first title since 2009 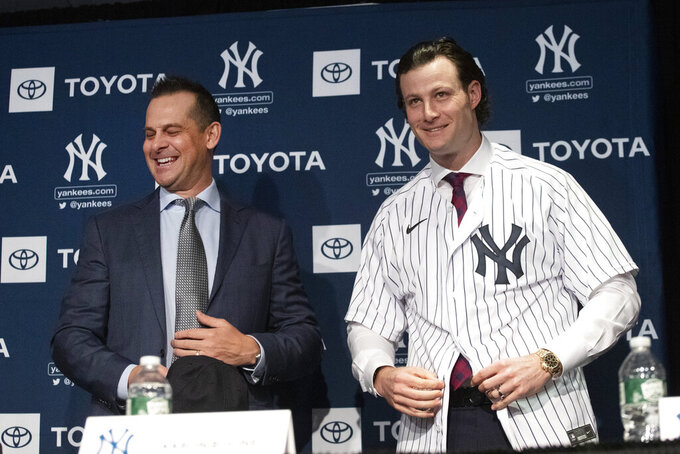 FILE - In this Dec. 18, 2019, file photo, New York Yankees manager Aaron Boone, left, smiles as Gerrit Cole tries on a Yankee jersey as he is introduced in New York. The pitcher agreed to a 9-year $324 million contract. "He's going to be a game changer for us," Yankees owner Hal Steinbrenner said. "The city's buzzing, and it's continued since the day we signed him." (AP Photo/Mark Lennihan, File)

TAMPA, Fla. (AP) — Aaron Boone is not adding baseball to his recent success in predicting the outcome of a major sporting event.

The New York Yankees manager nailed this month's Super Bowl, picking the Kansas City Chiefs to beat the San Francisco 49ers by the exact score of 31-20.

"How good was that?" a smiling Boone said Thursday. "I'll pick my spot."

Boone is upbeat about the Yankees' chances of winning back-to-back AL East titles and their first World Series championship since 2009.

New York won 103 games last season, its highest total since 2009, despite sending a record 30 players to the injured list. The Yankees swept Minnesota in the Division Series and lost to Houston in a six-game Championship Series.

New York then signed Astros ace Gerrit Cole to a $324 million, nine-year contract after he became a free agent.

"We don't feel like anyone should be able to get in our way," Boone said after watching a pre-spring training workout at the Yankees minor league complex. “I don't discount anyone heading into a year. Our job is to get ready to go win a championship. We're such a long ways away. It's such a long season."

Boone says he is not counting out Boston, which has a pending agreement to trade star outfielder Mookie Betts and lefty David Price to the Los Angeles Dodgers for prospects.

“They're a smart organization with a lot of wherewithal, so I'm sure they're doing what they think is best to get them on solid footing,” Boone said.

Still, Boone said he is "not entirely upset to see Mookie in the other league."

"Obviously he's about as good as it gets," Boone said. "Won't miss facing him 18 times a year, that's for sure."

Boone took Amtrak's Auto Train from Lorton, Virginia, to Florida for spring training. He arrived in Sanford, Florida — which is near Orlando — on Wednesday morning and then drove his car to Tampa.

Boone expects left-hander James Paxton, who had spinal surgery Wednesday, will be a factor down the stretch. The Yankees estimate Paxton will return to a major league mound in three to four months. "I think, hopefully, this is what knocks it out for good and put this past him," Boone said of the injury. "We end up saving some bullets for the end. We feel good about the surgery and look forward to him being back."