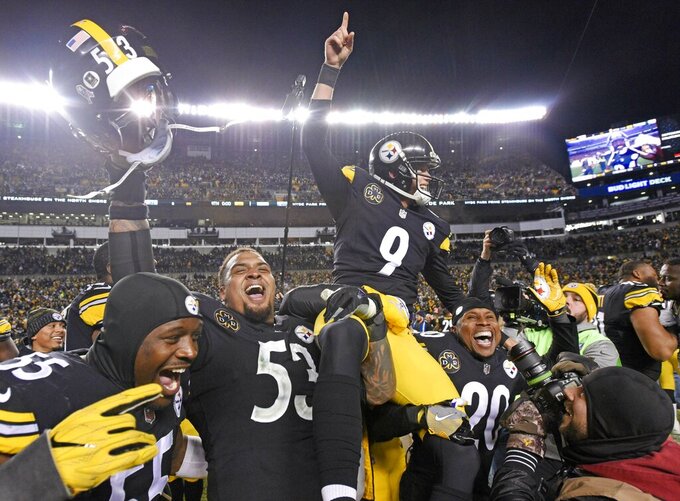 FILE - In this Nov. 26, 2017, file photo, Pittsburgh Steelers kicker Chris Boswell (9) is carried off the field after kicking the game-winning field goal against the Green Bay Packers in Pittsburgh. The Steelers kicker knows his underwhelming 2018 season directly contributed to the Steelers missing the playoffs. Yet rather than reinvent his offseason routine, he doubled down confident, he could bounce back. (AP Photo/Don Wright, File)

So rather than blow up his offseason routine following a nightmarish 2018 in which the Pittsburgh Steelers kicker struggled to find the form that made him a Pro Bowler in 2017 — a mini meltdown that contributed to his team's failure to reach the playoffs for the first time in five years — Boswell decided to just hang out back home in Texas and get to work.

No kicking camps. No soul searching. No guru shopping. Outside of a trip to Paris that gave him a chance to propose to his now-fiance, the 28-year-old kept it simple. Just like always.

There really wasn't any need. Boswell knows the Steelers didn't hand him a five-year deal worth nearly $20 million last summer so he could make just 13 of 20 field goals and miss a league-worst five extra points. That contract — awarded after Boswell nailed a handful of game-winners for a club that finished 13-3 in 2017 — was a lucrative display of confidence in him.

It also made it difficult for the Steelers to bail on Boswell — who signed with the team in 2015 after winning a tryout in the rain at Heinz Field — even as weeks went by last fall and the accuracy that defined his first three seasons in Pittsburgh abandoned him. He finished 2018 on injured reserve after tweaking his groin, then watched fill-in Matt McCrane earn the game ball after kicking three field goals in the regular-season finale against Cincinnati.

That moment didn't last for Boswell or McCrane. The Steelers did not re-sign McCrane during the offseason, bringing in rookie free agent Matthew Wright to serve as Boswell's primary competition during organized team activities and minicamp. The Steelers are clearly banking on a bounce-back year from the player who became an integral part of the "Killer B's" in 2017, when he made 35 of 38 field goals and developed a reputation for his resolve under pressure.

Boswell has no plans to turn the next three months into an extended duel with Wright.

"No matter who's out here, it's me versus me, it's not me versus anybody," Boswell said. "As long as I can conquer that, I should be pretty good."

That didn't happen often enough last fall. The issues started early. Boswell missed a 42-yarder in overtime in the wind and rain in Week 1 in Cleveland, a game that ended in a tie. It was a sign of things to come. Boswell missed at least one kick — be it a field goal or an extra point — in nine games in 2018. He had 11 such games in his first three seasons in the NFL combined.

The nadir came in a road loss to Oakland on Dec. 9. Footing on the always treacherous O.co Coliseum is always iffy. The Steelers used a hook-and-lateral play to get into field goal position in the final seconds. When Boswell planted his left foot for the 40-yard kick, he slipped. The ball smacked into the wall of linemen in front of him and he landed on his rear, a wildly uneven season boiled down to a wildly memorable play.

The problem was equal parts mechanical and mental, though Boswell is reluctant to dive into details. Ultimately, it doesn't matter.

"I'm going to stick to what I did going into my fourth year here," he said. "It didn't work last year. But I'm not just going to scratch everything. I'm here to do a job, and I'm going to focus on that job."

One that could be even more important for Pittsburgh in 2019. With former Killer B's Antonio Brown and Le'Veon Bell now working elsewhere, the Steelers have a smaller margin of error, potentially amplifying the importance of every kick.

"Personally, I didn't make them last year. But I made them every other year. So I mean if it comes down to it, I'm there," ''Boswell said. "I'm here to make kicks and whatever it is, first quarter, fourth quarter, overtime. That's what I'm here for."