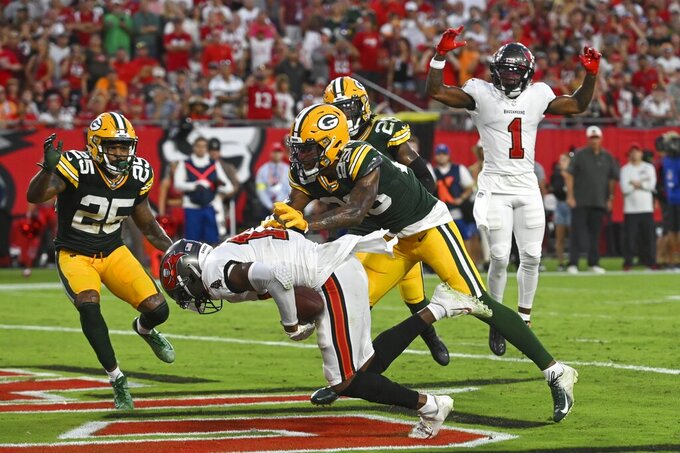 TAMPA, Fla. (AP) — While injuries have been a factor, there’s more to Tampa Bay’s scoring woes than a young offensive line and the absence of Tom Brady’s top receivers.

“I’m not going to sit here and blame it on the rookies,” coach Todd Bowles said Monday, reflecting on the Buccaneers (2-1) being limited to three offensive touchdowns through three games after averaging 29.9 points per game last season.

With a second-year pro playing center and a rookie filling in at left guard after two starting linemen went down during training camp, Brady has struggled to get the offense going in victories over Dallas and New Orleans, as well as during a 14-12 loss to the Green Bay Packers.

It hasn’t helped that leading receiver Mike Evans sat out against the Packers while serving a one-game suspension or that two of Brady’s other primary targets — Chris Godwin and Julio Jones — missed the past two weeks because of injuries.

Bowles reiterated that center Robert Hainsey, guard Luke Goedeke and third string left tackle Brandon Walton, another inexperienced player thrust into the lineup because starter Donovan Smith and backup Josh Wells are injured, were not the reason the Bucs didn’t get into the end zone until just 14 seconds remained against Green Bay.

“They’re playing good football They’re making a few mistakes, but they’re not the blame for everything that’s going on offense,” Bowles said. “It’s the offense as a total. We’ve got to get better running our plays and executing overall — young guys and older guys, coaches, everybody.”

The Bucs lost two fumbles, were 2 for 11 on third-down conversions and rushed for only 34 yards on 14 attempts on Sunday.

Brady completed 31 of a season-high 42 passes for 271 yards, relying on Russell Gage, Breshad Perriman, Scotty Miller, Jaelon Darden and newly signed Cole Beasley to take up the slack for the absence of Evans, Godwin and Jones at receiver.

Gage’s 1-yard TD reception trimmed Green Bay’s lead to 14-12 before Brady's bid to force overtime with a 2-point conversion was thwarted — in part — by a delay of game penalty that was the final miscue on a mistake-filled day.

The penalty backed the ball up to the 7-yard line, increasing the difficulty of making a 2-point conversion. Brady's pass intended for Gage was tipped by Packers linebacker De’Vondre Campbell before falling incomplete.

“We didn’t play well enough. There wasn’t one thing,” Bowles said, summing up the loss.

“We didn’t play well enough. We didn’t score enough points. We let them get out to a fast start. You can name a number of things that could have went right that didn’t go right,” Bowles added. “We didn’t play like we played the last two games. We had more mistakes than we had the previous two.”

The defense regrouped after Aaron Rodgers threw for touchdowns on Green Bay’s first two possessions, building a 14-3 lead. The Packers threatened again on their next possession, driving to the Bucs 2 before Aaron Jones fumbled into the end zone, where safety Logan Ryan recovered for Tampa Bay. Green Bay didn’t come close to scoring again. Through three games, the Bucs are allowing 9 points per game.

Despite recovering from a slow start to keep the Bucs within striking distance, there is concern the defense has given up points on the opposition’s opening drive in every game.

“Got to play four quarters. ... The first quarter, we gave up 14 points just from missed assignments and doing something we aren’t supposed to be doing,” Bowles said. “Second half, they played a lot better and gave us a chance to win.”

Although he lost a third-quarter fumble that stopped a promising drive, Gage made the most of being targeted 13 times with 12 receptions for 87 yards. Beasley made his Bucs debut after only three days of practice, catching three passes for 12 yards.

The Bucs rushed for 34 yards, with Leonard Fournette gaining 35 on 12 attempts, against the Packers. Backup RBs Rachaad White and Ke’Shawn Vaughn did not play any snaps on offense, which Bowles said has to change.

Bowles said there’s a chance Jones (knee) will be able to play this week against Kansas City. He sounded less certain about Godwin (hamstring) and Smith (elbow), saying their progress will monitored in practice.

35 — The Bucs held the Packers to 67 yards rushing on 25 attempts. Since Bowles installed his defensive scheme in 2019, Tampa Bay held opponents to fewer than 100 yards on the ground a league-high 35 times.

Another big test for the defense, with Patrick Mahomes and the Chiefs headed to town Sunday night. The Buccaneers announced Monday they will relocate football operations to the Miami area in preparation for the game ahead of the potential impact of Hurricane Ian on Florida’s Gulf Coast.