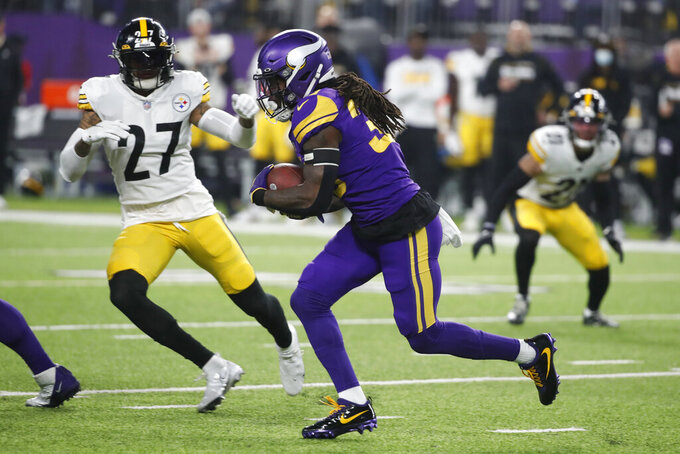 Frank Gore is open to returning to the NFL for a Super Bowl run after he makes his boxing debut.

The five-time Pro Bowl running back faces former NBA All-Star Deron Williams on Saturday night on the undercard of the rematch between Jake Paul and Tyron Woodley.

“I’m excited but I’m also nervous about it because it’s new to me,” Gore said on the AP Pro Football Podcas t.

Gore ran for 16,000 yards, third most in NFL history, during 15 seasons with the 49ers, Colts, Dolphins, Bills and Jets. He spurned an offer to return during training camp to spend time with his family. If a playoff-bound team calls now, he’s ready.

“I’m in the best shape of my life,” Gore said. “Boxing shape is totally different than football shape. I feel like I can go out there and give a team a spark. It has to be a good situation for me and the team.”

Gore said he had boxed as part of his football training but didn’t consider getting in the ring for a fight until the offseason when a boxing coach told him he had the skills to do it.

“Boxing is tougher physically because I have to spar three times a week,” he said. “It’s also different because of all the jogging. In football, I did sprints. I hate jogging, but I have to do it to be in the ring.”

Gore, who spent his first 10 seasons in San Francisco, also hopes to eventually work in the team’s front office.

Minnesota’s Dalvin Cook rushed for a season-high 205 yards last week against Pittsburgh, finding gaping holes at the line in a masterful performance by his blockers and the offensive coaching staff. Not to be overlooked in the success was fullback C.J. Ham, who was at his protective best. The 2019 Pro Bowl pick could find himself going to the all-star game again this year.

“He comes to work every day on time, knows what he needs to do, his assignments. If you want to know something at running back, you can ask him. He knows both positions," Cook said.

“Off the field, the things he does in the community are outstanding. He’s a dad, and the things he does with his kids are amazing. I look up to him as a big brother, so that’s my guy right there. You’re about to make me cry talking about my guy.”

There’s no shortage of Ham fans in the Vikings’ organization. Undrafted out of Augustana, an NCAA Division II program, the native of Duluth, Minnesota, is in his sixth season with the Vikings and is as well-versed in the offense as anyone.

“It’s such a comfort to have a player like that. There are times when I’m asking him, ‘Did I call that play right?,’ or, ‘What’s the motion here?’ And he’ll get me right,” quarterback Kirk Cousins said. “That just says the world about C.J. and what he’s capable of athletically and also mentally. He’s a great teammate. He’s the kind of person you want in this organization because he sets the standard for so many guys. If you say, ‘How do we do things around here?’ go look at C.J. Ham. That’s how we do things.”

New York Giants quarterbacks coach Jerry Schuplinski didn’t have the best of times when the team trained in Tucson, Arizona leading to their game against the Chargers in Los Angeles.

Schuplinski tested positive for COVID-19 shortly after the team arrived from Miami and he was isolated in the team’s hotel. He spent the week working virtually.

While his symptoms were minor, another problem was watching the Giants play Sunday.

When the team left, he and guard Wes Martin, who also tested positive, moved to a hotel in Phoenix to be closer to the airport. The game wasn’t on TV, so Schuplinski sheepishly admitted he used a relative’s network to watch it on his mobile device. That is until the signal went out for a few minutes.

So he face-timed his wife, Megan. She wanted to talk. The harried coach wanted the game.

“‘Turn on the game, turn on the game’” Schuplinski said in recalling the conversion. “I’m like, ‘We’ll catch up later, just show the game right now real quick until I get this iPad going.’”

He's back with the Giants, returning to the New York area on Wednesday.

There’s no guarantee that the New York Jets’ trip to South Florida this weekend to play the Miami Dolphins will result in a close game.

But the series at Hard Rock Stadium couldn’t be closer, part of an astounding trend for the Dolphins when facing AFC East foes in their home building.

The Jets have come to Hard Rock Stadium on 33 previous occasions and Miami is 17-16 in those games. Combined score of those games: Dolphins 731, Jets 731.

And no, the Buffalo-Miami series isn’t tied at Hard Rock, but only by the thinnest of margins. The score of 35 previous regular-season game between those clubs on Miami’s current home field: Bills 764, Dolphins 763.

NBC has joined Fox Sports as a broadcast partner for the USFL, which will begin play in April.

NBC will present 21 regular-season and playoff games across NBC (eight), USA Network (nine) and Peacock (four). Fox Sports will air the other 22 games with 12 on Fox and 10 on FS1.

The league will have eight teams, but will play in one host city, which is expected to be announced shortly. The team names will be familiar to those who followed the USFL’s first incarnation from 1983-85. The new USFL is controlled by Fox Sports and is not associated with the original league or its owners.

Noah Eagle, Nate Burleson and Gabrielle Nevaeh Green will return to the booth for Nickelodeon’s kid-focused production of an NFL playoff game.

CBS and Nickelodeon once again have a wild-card game on Sunday, Jan. 16 at 4:30 p.m. ET. Eagle, who does radio play-by-play for the NBA’s Los Angeles Clippers, has added some network assignments to his calendar, while Burleson is on “The NFL Today” and “CBS Mornings.” The 16-year-old Green, who is on Nick’s “All That”, drew lots of positive reviews for her role in last year’s broadcast.

Last year’s 21-9 victory by the New Orleans Saints over the Chicago Bears averaged 30.65 million, making it CBS’ most-viewed first-round game since 2014. The 2.06 million average for the kids-oriented broadcast on Nickelodeon made it the network’s most-watched program in nearly four years.