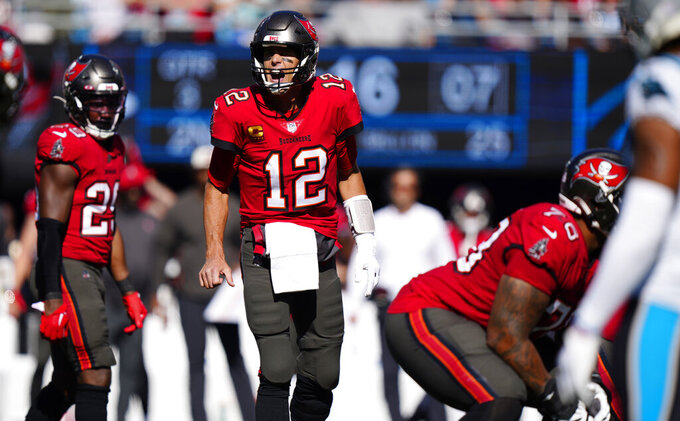 Tampa Bay Buccaneers quarterback Tom Brady (12) directs his team during the second half of an NFL football game against the Carolina Panthers Sunday, Oct. 23, 2022, in Charlotte, N.C. (AP Photo/Jacob Kupferman)

The seven-time Super Bowl champion and one of the NFL’s best young quarterbacks meet for the second time in their careers when the struggling Tampa Bay Buccaneers host the Baltimore Ravens on Thursday night.

When the 45-year-old Brady retired briefly last winter, he posted a story and picture of the two of them on social media with the caption: “You’re next.”

A few weeks later, the league’s career passing leader announced he would return for a 23rd season, hoping to complete “unfinished business” with the Bucs.

With the Ravens (4-3) headed to Tampa this week for the first matchup between the star quarterbacks since 2019 — Brady’s final season with the New England Patriots — the 25-year-old Jackson was asked about the Instagram post.

Jackson led the Ravens to a 37-20 victory over the Patriots three years ago. He’s never had an opportunity to speak with Brady off the field, however he acknowledged he appreciated the Instagram post.

The Bucs (3-4) have lost four of five games following a 2-0 start. Brady has only thrown one interception and leads the NFC with 1,942 yards passing, however he has just eight TD passes and Tampa Bay is tied for 25th in the league in scoring at 17.7 points per game.

Brady, who’s hoping to get the sputtering offense on track against the Ravens, said he reached out to Jackson on social media last winter because he thinks “very highly” of the young quarterback and “I think he’s got a great future.”

“He’s an amazing player and he challenges defenses. He has a really unique skillset. His ability to improvise, make plays with his legs, extending plays. They do a good job with that offense,” Brady said.

“He’s obviously very dangerous with the ball in his hands. And they’ve got some weapons, too, so it’s a tough challenge for our defense,” Brady added. “We’re going to have to play a real complementary game, play tough, hard-nosed football, and try to get a win.”

The Ravens had a season-high five sacks last weekend against Cleveland, two of them by veteran linebacker Justin Houston. With Houston, Calais Campbell and Jason Pierre-Paul, Baltimore became the second team (after the 1994 Green Bay Packers) to have three defensive players on the active roster with at least 90 sacks — although Campbell is ruled out this weekend because of an illness.

Pierre-Paul spent the past four seasons with Tampa Bay. He signed with the Ravens last month.

Baltimore’s Justin Tucker has kicked five field goals of under 35 yards over the past three games.

“Obviously, it gets tougher in the red zone. The field is smaller, the passing lanes are tighter, you’ve got to execute,” Ravens coach John Harbaugh said.

“Things happen faster on offense, and they happen faster on defense. So, it’s just a matter of getting in there and getting the job done, whether it’s connecting on a pass, or hitting a run. Everyone wants to run the ball in the red zone. That’s the best way to do it. Then you talk to our defense, we don’t want to allow that either.”

Gus Edwards returned last weekend for his first game after missing the whole 2021 season following a major knee injury. He ran for 66 yards and two touchdowns, but he was also limited in practice this week. Rashod Bateman returned from a foot injury against the Browns but then missed practice time.

Also missing practice this week was tight end Mark Andrews, who has had knee issues and went without a catch last weekend.

The Bucs, meanwhile, will be without three-fourths of their starting secondary, as well as staring left guard Luke Goedeke. Safety Antoine Winfield Jr., cornerbacks Carlton Davis and Sean Murphy-Bunting, wide receiver Russell Gage and tight end Cameron Brate are out, too. Defensive tackle Akiem Hicks (foot) is doubtful and receiver Julio Jones (knee) will be a game-time decision with injuries that have sidelined them much of the season.