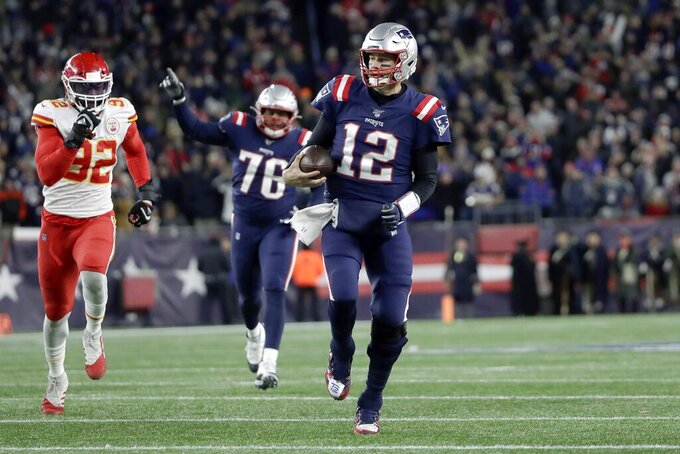 Tom Brady and the New England Patriots are hoping the third time's a charm on clinching a playoff berth.

The Patriots (10-3) have lost two straight games with a chance to secure their 17th postseason appearance in coach Bill Belichick's 20 seasons. This time all they have to do to join Baltimore, Kansas City and New Orleans in the playoffs is beat or tie the 1-12 Cincinnati Bengals in Week 15.

New England, which is going for an 11th straight postseason trip, hasn't lost three straight since a four-game skid in Brady's second year as the starter in 2002.

Buffalo and NFC West-leading San Francisco also are in with a win. The Bills (9-4) visit Pittsburgh in a huge game for the AFC wild-card hopes of the Steelers (8-5). The 49ers (11-2), who can also clinch with a tie, are home against 4-9 Atlanta.

The Ravens (11-2) can clinch the AFC North title with a win or tie at home against the New York Jets (5-8), or a Pittsburgh loss or tie. Baltimore wraps up home-field advantage throughout the AFC playoffs with a win, a New England loss and a Kansas City loss or tie.

Seattle (10-3) can clinch an NFC playoff spot with a victory and losses by either the Los Angeles Rams or Minnesota. The Seahawks, who play at Carolina, have two other more complicated paths to a postseason berth.

Green Bay (10-3) is in with a win and a Rams loss or tie, or a tie and a Rams loss. The Packers are home against Chicago, with the Bears (7-6) hoping to stay alive in the NFC wild-card chase.

LA is visiting the Dallas Cowboys, who are tied with Philadelphia for the NFC East lead at 6-7. The Rams (8-5) also are trying to keep wild-card hopes alive.