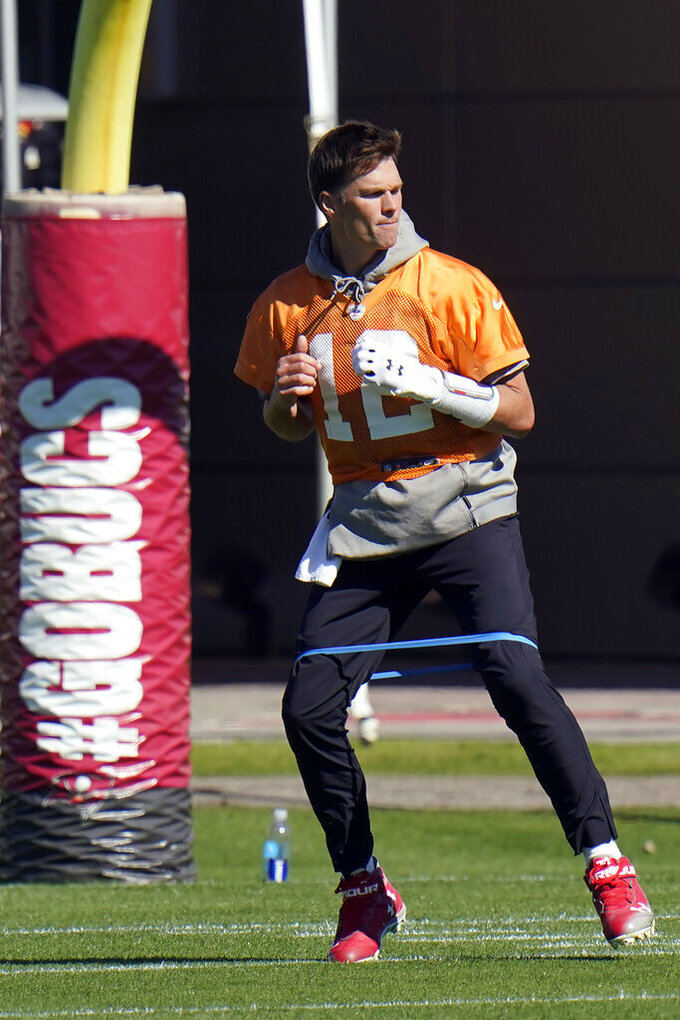 TAMPA, Fla. (AP) — Construction of the Tampa Bay Buccaneers began long before Tom Brady decided the once-downtrodden team had most of what he needed to have an opportunity to build on his legacy of championships.

The 43-year-old quarterback is back in the Super Bowl for a record 10th time, surrounded by an All-Star cast of playmakers he helped assemble and a young defense that has played its best ball of the season during a playoff run to the NFL title game.

The GM who worked for the New England Patriots when Brady entered the league as a sixth-round draft pick also lured coach Bruce Arians out of retirement in hopes of fixing a shaky quarterback situation and provide a new vision on the field.

The 68-year-old Arians, who had worked with Licht while he was coach of the Arizona Cardinals, couldn’t salvage former No. 1 overall pick Jameis Winston but dared to dream of signing Brady if the six-time Super Bowl champion decided to leave New England as a free agent.

“You can’t hit a home run unless you swing for one. You can’t do anything special in life sitting on a fence,” Arians said.

“The question back then was if there was a quarterback that was a free agent, who would you want? Of course it was Tom Brady, not thinking he would become a free agent,” Arians added. “But once he did, it was a pursuit we wanted to make. That’s how you live life. Do you sit and live in a closet and try to be safe? Or do you go have some fun?”

Sounded pretty good to Brady, who signed a fully guaranteed two-year, $50 million that also included lucrative incentives for helping the Bucs end a 12-season playoff drought and reach the Super Bowl for the first time in 18 years.

Part of the attraction was a talented core of playmakers already in place led by Evans, the only receiver in the NFL to begin his career with seven consecutive seasons with at least 1,000 yards receiving. The quarterback also liked what Arians wanted to do on defense.

Despite landing the league's career passing leader, the Bucs coach felt it was necessary to construct a championship-caliber defense.

The Bucs placed the franchise tag on linebacker Shaquil Barrett, a 2019 free agent signing who led the league in sacks in his first season with the Bucs. They also re-signed defensive tackle Ndamukong Suh and linebacker Jason Pierre-Paul while remaining committed to developing a young secondary that has experienced some growing pains.

“I looked at just the whole situation. There were a lot of reasons to come here. Obviously a great coaching staff and a lot of really great players, just wanting to come and compete,” Brady said. “I’ve loved working with my teammates. We’ve all worked really hard to get to this point.”

Licht and Arians were also open to input from the quarterback, who wanted to reunite with tight end Rob Gronkowski.

Veteran running backs LeSean McCoy and Leonard Fournette were added during the summer, and receiver Antonio Brown was a mid-season addition to the offense.

The Bucs remain a team primarily built through the draft, though.

Eight starters and a pair of key reserves were selected in the past three drafts, including 2019 No. 5 overall pick Devin White and offensive tackle Tristan Wirfs and safety Antoine Winfield, Jr., the club’s first two selections in 2020.

White, Wirfs and Winfield all became starters from Day One. White had 15 tackles and recovered a fumble in Tampa Bay’s NFC championship victory over Green Bay, second-year Sean Murphy-Bunting has three interceptions this postseason, and second-year receiver Scotty Miller came off the bench to contribute each of the Bucs three playoff road wins.

“Naturally, I think you envision every year in the offseason you want to make some moves that hopefully get your team into the Super Bowl. I think when you sign a guy like Tom, it makes it a little more realistic,” Licht said.

“Just talking to him the days after we signed him, you could just hear and feel the confidence that he had. It made it a little bit more real,” the GM added. “Now, you never take anything for granted. We had some highs and lows in the season where things at times looked a little grim. We needed to pull together, but we never lost our confidence.”