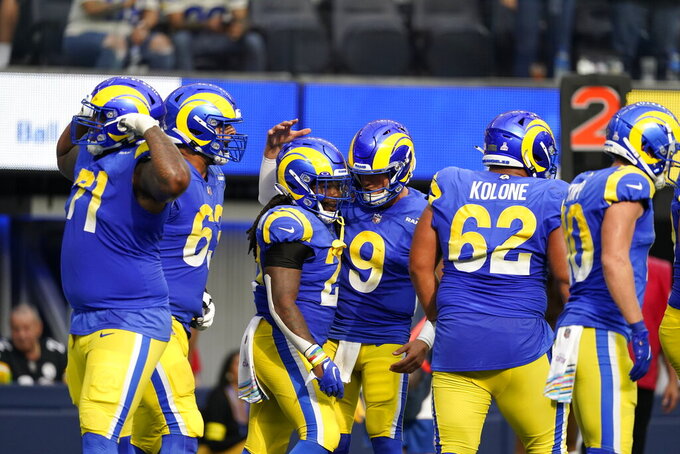 THOUSAND OAKS, Calif. (AP) — Brian Allen thought his troublesome knee would not be a problem.

The Los Angeles Rams center had carefully managed his workload during organized team activities and training camp in hopes that the swelling caused by loose bodies would settle down by the start of the season.

“And then, you know, it’s Wednesday morning and we’re playing Buffalo the next day, and I’m getting 50 CCs drained out of my knee,” Allen said.

Allen played in the humbling 31-10 loss to the Bills in the Rams’ season opener on Sept. 8, before undergoing surgery the following day on his knee. After sitting out the last five games, Allen looks to be on track to return against the San Francisco 49ers on Sunday.

“It’s kind of an uncomfortable feeling going out there with one-and-a-half legs, so I feel better now than I felt going into last year, so I’m pretty happy,” Allen said after practicing on a limited basis Wednesday.

The Rams (3-3) hope the return of Allen can help stabilize an offensive line that has allowed 22 sacks, 19 of which came in defeats to Buffalo, San Francisco and Dallas.

Allen started 16 regular-season games in 2021 and all four playoff games as Los Angeles won the Super Bowl, leading a front five that ranked tied for sixth in sacks allowed (31) despite attempting the 10th-most passes.

But Allen was the first to miss time because of ailments that have robbed the line of continuity this season. Coleman Shelton moved from right guard to center before sustaining a high-ankle sprain in Week 4 against the 49ers (3-4), forcing third-stringer Jeremiah Kolone to take over snapping the ball. Left guard David Edwards went on injured reserve Oct. 11 after entering concussion protocol for the second time. Left tackle Joe Noteboom sustained a season-ending Achilles tendon injury against Carolina in the last game before the Rams’ bye week.

“Yeah, we’ve definitely had our bumps and bruises, and things not go our way a couple times,” Allen said. “It’s like watching your brother get beat up and you can’t get in there for a sucker punch, so (it feels) kind of like that.”

In spite of that turmoil, Los Angeles is still in good position to mount a playoff push as long as the offensive line can improve in pass protection and jumpstart a run game that ranks second-to-last in the NFL.

The starting group against San Francisco will likely consist of Alaric Jackson at left tackle, Bobby Evans and Oday Aboushi flanking Allen, and right tackle Rob Havenstein, the only holdover from Week 1.

Coach Sean McVay believes Allen’s experience in the offense and rapport with quarterback Matthew Stafford can help the line come together.

“It’s good to be able to get Brian back with us,” McVay said. “His command, his understanding of what we’re trying to really get done, and then his communication up front breeds confidence to everybody else.”

Stafford said Allen’s comfort and leadership were evident as soon as he got back on the field.

“Like I said, I think one of the things you can’t take for granted is just his ability to communicate. That experience is really valuable in this league and in this offense,” Stafford said.

And there should be more reinforcements on the way. Wide receiver Van Jefferson could make his season debut this week after undergoing knee surgery in August, and rookie running back Kyren Williams was designated to return from injured reserve Tuesday, starting his 21-day clock to be activated to the roster.

“I think we’re in a good spot,” Allen said. “You know, 3-3 off the bye, guys are coming back, getting healthy. No one’s, obviously, satisfied with where we’re at. Guys are still hungry, want to get better, and we got a lot of football left to play.”

NOTES: RB Darrell Henderson Jr. (illness) did not practice Wednesday. … RB Cam Akers (personal) remains away from the team. … Kolone was signed to the practice squad after being waived Monday.