Broncos can get right back into AFC West race 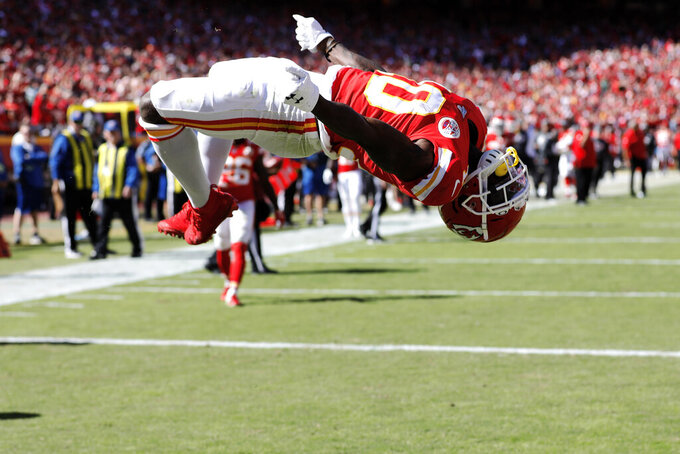 Kansas City Chiefs wide receiver Tyreek Hill (10) does a flip as he celebrates a touchdown during the second half of an NFL football game against the Houston Texans in Kansas City, Mo., Sunday, Oct. 13, 2019. (AP Photo/Colin E. Braley)

DENVER (AP) — Keeping Patrick Mahomes on the sideline has worked wonders for Kansas City's opponents, providing a blueprint for the Broncos on Thursday night as they seek their first win over the Chiefs in four years.

"Every game has its own personality," cautioned Broncos coach Vic Fangio .

Every team also builds its own reputation, and the Chiefs (4-2) have a dud of a defense to go along with that firecracker offense. Exploit that and the Broncos (2-4) can jump right back into the AFC West race after their September stumble.

Over the past four weeks, the Chiefs, who have lost two in a row after a 4-0 start, have allowed an average of 190 rushing yards and 4.97 yards a carry as their opponents piled up eight TD runs.

"We have to fix it," Chiefs coach Andy Reid said.

The Chiefs have allowed a 100-yard rusher in four consecutive weeks, and it would have been five if not for the Raiders' Josh Jacobs' hydration problems — he finished with 99 yards on just 12 carries.

"I mean, look, there's just one area we don't feel great about and it's stopping the run," said first-year coordinator Steve Spagnuolo, who has transitioned the Chiefs from a 3-4 to a 4-3 defense. "We don't want to be looking at the number of run plays, the yardage they're putting up with runs — somehow, some way we have to figure it out. Until we stop it, we're going to see it."

Up next are the Broncos, winners of two straight and the NFL's only team that sports two running backs each with at least 400 scrimmage yards. But if Royce Freeman and Phillip Lindsay, who have accounted for 973 yards so far, are relishing the matchup, they're masking it pretty good.

"Every game in the NFL is tough," Lindsay said.

"Every team goes out there and they make their adjustments week to week," Freeman said. "You've got to assume they're going to go out there and try to switch things up. Plus, we have a short week, so you never know what to expect."

Just look at Denver's defense , which found a quick fix to its run game problems. After allowing Leonard Fournette to go wild as the Jaguars piled up 269 yards on them, the Broncos allowed just 35 yards to the Chargers and 39 to the Titans.

"It's the NFL. Guys change things every week," Freeman said. "Our defense has done a great job flipping the script."

It's time for Denver's offense to do likewise, he added.

The Broncos are averaging just 17.6 points. Even during their two-game skid, the Chiefs averaged 18.5 points despite losing the time of possession by an average of 38 minutes to 22 minutes.

Other subplots as the Broncos try to snap a seven-game skid and beat Kansas City for the first time since Sept. 17, 2015:

Tyreek Hill had two TD grabs last week in his return from a broken collarbone. The Chiefs were without Sammy Watkins because of a hamstring injury, and they'll be missing him again against Denver, where DB Kendall Fuller (thumb), DT Chris Jones (core muscle), LT Eric Fisher (core muscle) and LG Andrew Wylie (ankle) are all out.

Broncos WR Emmanuel Sanders returns from a sore knee that knocked him out last week. Sanders has caught just two passes for 9 yards the past two weeks. Sanders' injury in his third in a year (ACL, ankle).

Reid and Fangio are the same age — 61. Reid is in his 28th NFL season, 21 as a head coach and is seeking his 200th regular-season win. Fangio is in his 33rd NFL season but first as a head coach. "He's one of the special defensive minds of the game," said Reid, who knows all about Fangio's reputation.

Von Miller isn't the Broncos' sacks leader. It's backup DE DeMarcus Walker, who has three sacks after getting just one in each of his first two seasons. His first came against Mahomes when both were rookies.