Broncos CEO says team's ownership will be settled next year 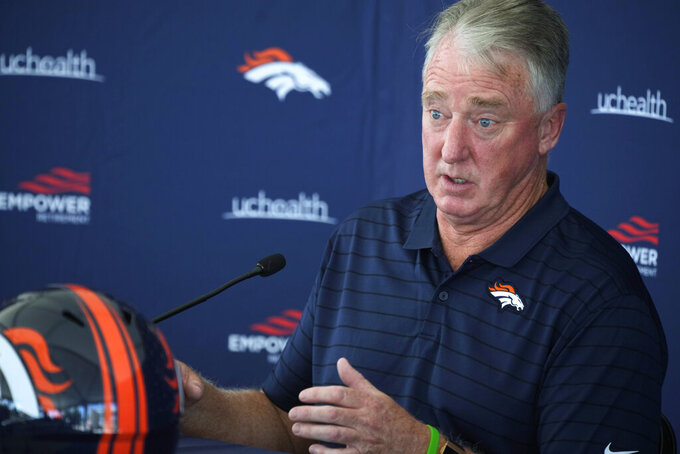 Joe Ellis, president of the Denver Broncos, speaks during a news conference Tuesday, July 27, 2021, in Englewood, Colo., as the NFL football team was preparing for training camp. (AP Photo/David Zalubowski)

ENGLEWOOD, Colo. (AP) — The Denver Broncos should have a new owner by this time next year, whether that's Brittany Bowlen or a billionaire like Jeff Bezos.

Team president and CEO Joe Ellis said Tuesday that the trust that runs the franchise will begin a transition in early 2022 and the new owner will be in place by the start of next season.

“Yours truly won't be the controlling owner (delegee) by sometime in the spring or early summer, I can't put an exact deadline on it. But believe me, we need to get it resolved,” said Ellis, who has run the team since 2014 when Alzheimer's forced late owner Pat Bowlen to step away from his daily duties.

Ellis is one of three trustees of the franchise valued at $3.2 billion. The trust could approve one of Bowlen’s children to become the team’s next controlling owner — Brittany Bowlen, 31, is the preferred choice — or sell the team altogether.

Arapahoe County District Judge John E. Scipione granted a motion earlier this month to dismiss a lawsuit filed by two of the late owner’s daughters from his first marriage. All sides in the dispute are prohibited from discussing the matter.

Amie Bowlen Klemmer and Beth Bowlen Wallace had alleged their father was already affected by Alzheimer’s and was subject to “undue influence” in setting up the three-person trust that has run the team since he stepped away in 2014. Bowlen died in 2019, a month shy of his Hall of Fame induction.

The judge's order means the trust retains the power to decide the franchise's future.

Ellis said he met with Roger Goodell earlier this month at the commissioner's summer home in Maine and laid out his transition plan and “he was fine with it."

Ellis is in his 11th season as team president and his eighth as chief executive officer. He was in charge during two Super Bowl trips and the franchise's third championship but also during a current five-year playoff drought that includes four consecutive losing seasons, the team's worst stretch since the 1970 AFL-NFL merger.

Heading into his last go-round, Ellis said he has one goal in mind.

“I would like to be able to stand up in front of the group here and talk about a good season,” Ellis said. “I've come before you for the last several training camps spewing optimism and excited and the (records of) 5-11, 6-10, 7-9 and 5-11 come out at the end of the year.”

Ellis said he feels the team is in good hands with first-year GM George Paton and third-year coach Vic Fangio and a roster that appears ready to shine no matter who wins the quarterback clash at camp, Drew Lock or Teddy Bridgewater.

“I'm very confident ... we're in a position to win,” Ellis said. "But we've got to win. It's kind of enough already for me personally just watching it. And I've been here a lot of years when we've had some success. And to have it carry on in the other direction for as long as it has, it's tough for everybody.

“But I just want to see us turn the corner and be successful.”

If Brittany Bowlen succeeds her father as controlling owner, the team will remain in trust but possibly with new trustees, Ellis said.

Ellis said he's been impressed with Brittany Bowlen, who's worked a variety of administration roles for the Broncos over the last couple of years.

“The one thing that sticks out to me is just her ability to earn it and not throw her weight around, which she probably could have because she's the daughter of the owner,” Ellis said. "And she's just come in here and tried to earn everybody's trust and respect.

“I think she's got the potential to do this but we'll have to see how it plays out.”