Broncos have had it with Garett Bolles' holds 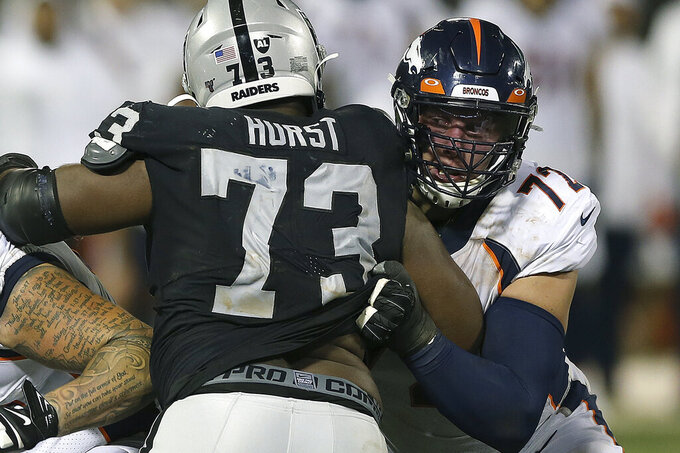 ENGLEWOOD, Colo. (AP) — His teammates and even his boss have had it with Broncos grabby left tackle Garett Bolles, who suggested officials are unfairly targeting him for holding infractions.

Their 2017 first-round draft pick was flagged four times for holding in Denver's 16-14 loss to Chicago on Sunday, giving him 34 yellow flags in 34 starts, 26 of them for grabbing his opponent.

The laggard left tackle exacerbated his troubles by suggesting afterward that the officials are picking on him.

The backlash was swift and spirited.

Coach Vic Fangio and star receiver Emmanuel Sanders admonished Bolles to quit grabbing jerseys, putting his hands outside the framework of defenders and finishing plays by tackling his opponent to the ground.

Then, general manager John Elway issued a scathing rebuke of Bolles on his weekly show on KOA NewsRadio.

"And that was my question yesterday, 'Does he know what holding is?' Does he know what he can and can't do? If he thinks he's getting targeted, he's got to realize he isn't. We'll keep working for it and he's still a talented guy," Elway added.

"He cannot do that because it's beating us."

A police officer escorted Bolles off the field after his foursome of penalties Sunday, which promoted wisecrackers on social media to label him the league's best holder and point out he has more tackles that Von Miller's four so far.

One fan posted a photo of the tackle's No. 72 jersey custom stitched with "HOLDING" across the nameplate in place of "BOLLES."

Bolles, whose infractions have cost the Broncos nearly 450 yards in field position over his career, exacerbated his troubles in the locker room after the game by suggesting he wasn't getting a fair shake.

"It was frustrating. I've built a reputation for myself in this league of holding. I disagree with it, to be honest," Bolles said, adding he takes solace in knowing his coaches, including Hall of Famer Mike Munchak, his teammates and the front office all had his back.

"I'm going to turn this around," Bolles pledged, adding, "That was just unfortunate that they keep coming after me."

Suggesting he was the victim prompted Mark Schlereth , Orlando Franklin and Tyler Polumbus , three former Broncos O-linemen who are now broadcasters, to scold Bolles for either an astonishing lack of self-awareness or a disturbing lack of accountability.

Noting that three of his four flags Sunday came on runs, Fangio suggested Bolles needs to be "more technique-sound. I think he suffers from him thinking he's in good position sometimes and dumps the guy at the end where he thinks it's a legal block. We have to do a better job of explaining that to him. He's got to do a better job of listening to the explaining."

Fangio dismissed the notion of benching Bolles if even for a series to clear his head or make him realize his holding habit could put his job in jeopardy because super sub Elijah Wilkinson is already filling in for injured right tackle Ja'Wuan James.

"With our depth the way it is at this point, that's probably not an option," Fangio said.

Right guard Ronald Leary, who drew two holding calls Sunday — one of which actually appeared to be on Bolles — defended his embattled teammate after the game.

Sanders suggested any such support must be met with a commitment from Bolles to clean up his game.

"He needs to understand that he is doing something wrong because they keep throwing the flags on him and he keeps holding," Sanders said.

Schlereth said on 104.3 The Fan in Denver that O-lineman always stick up for one another publicly, but added it's his experience that differing standards for high draft picks lead to resentment.

"What really irritates you is when you're held to a standard as a player and there's one guy within that room that's not held to the same standard because you're mama-catting him because you've got nowhere else to go," Schlereth said. "That's on John Elway (and) that's on (director of player personnel) Matt Russell because you picked a guy that flat-out can't play."