Broncos return to their bungling ways; is rebuild next? 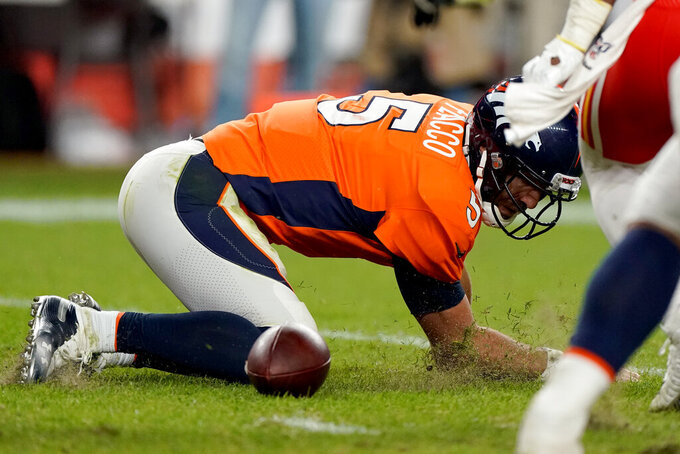 Denver Broncos quarterback Joe Flacco (5) falls after being sacked against the Kansas City Chiefs during the second half of an NFL football game, Thursday, Oct. 17, 2019, in Denver. (AP Photo/Jack Dempsey)

DENVER (AP) — John Elway might want to reconsider the no-fire sale pledge he made last week.

These Denver Broncos aren't going anywhere near the playoffs with an offensive line that can't block, a featured tight end who can't catch, a superstar pass rusher who can't get to the quarterback and a coaching staff that can't quit making rookie mistakes.

The Broncos (2-5) blew a chance to get back in the playoff race with their unsightly loss to a Kansas City Chiefs team that was missing several key starters and lost MVP Patrick Mahomes to a knee injury.

It was so bad even their punter got sacked.

Ever since scoring TDs on their first two possessions against the Chargers on Oct. 6, the Broncos have managed just two touchdowns in their last 33 drives, not counting kneel-downs or end-of-game walk-offs. The other drives have produced five field goals, two missed field goals, two fumbles, two interceptions, two turnovers on downs and 18 punts, including the fake that failed when Devontae Booker failed to get open and Colby Wadman took the sack.

The Broncos' opening touchdown drive against a depleted Kansas City team that had lost two straight looked like a tone-setter when 240-pound running back Royce Freeman bulled his way in from the 1, capping a 10-play, 75-yard drive. But when Alex Okafor was whistled for encroachment on the PAT, things went haywire for Denver.

"The go for 2, it's a pretty high percentage from the 1-yard line," coach Vic Fangio explained. "That's one of those analytical things. I'm not sure if I'll do it the next time because I believe the 2-point play needs to be basically ignored until fourth quarter or late in the third, but for 1 yard to get an extra point I thought it was worth the gamble."

Fangio sent Phillip Lindsay, who's 50 pounds lighter than Freeman, into the wall of defenders, leaving the Chiefs celebrating, the Broncos downcast and the stadium no longer buzzing.

Points proved precious, all right. The Broncos' output was the lowest in 71 prime-time games and the Broncos took turns drawing jeers:

— Rookie Noah Fant, who caught one pass for 7 yards, dropped three deep passes that would have given him well over 100 yards and put Denver in scoring position three times.

— Kicker Brandon McManus, who's made just one of his last eight field goals from beyond 50 yards, missed from 45.

Elway has steadfastly refused to rebuild his roster, insisting he's all about winning, not remodeling. Last week he declared, "No one from our side is on the trading block. We're going to try to continue to win football games."

It might be time to see what he could get for some of his veterans so he can stock up on draft picks for a makeover in 2020.

"We haven't had any of those discussions yet," Fangio said. "I don't know that we will. We'll see."

Safety Justin Simmons, who had eight tackles and broke up two passes.

The value of WR Emmanuel Sanders and CB Chris Harris Jr., who would be coveted by contenders such as the Packers and Eagles looking for reinforcements.

Bolles, who can't shake his holding habit. "Some of it is poor technique. I think that's the biggest culprit in his operation," Fangio said. "We've got to do a good job of getting that taught to him in such a way that it sticks and that he can consistently do it on a week-in and week-out basis."

Safety Will Parks (hand) is out until next month. Rookie QB Drew Lock (thumb) returns to practice next week.

Straight zeros: Von Miller's stat line after his sack of QB Matt Moore was wiped off by a Duke Dawson penalty. "Although his numbers aren't going to show that," Fangio said, "I thought he played pretty damn good."

The Broncos get a long weekend to recover for their trip to Indianapolis next week that will show whether this blowout by the Chiefs was an aberration or a revelation.