Broncos: Saints' Hill at QB both a blessing and a curse 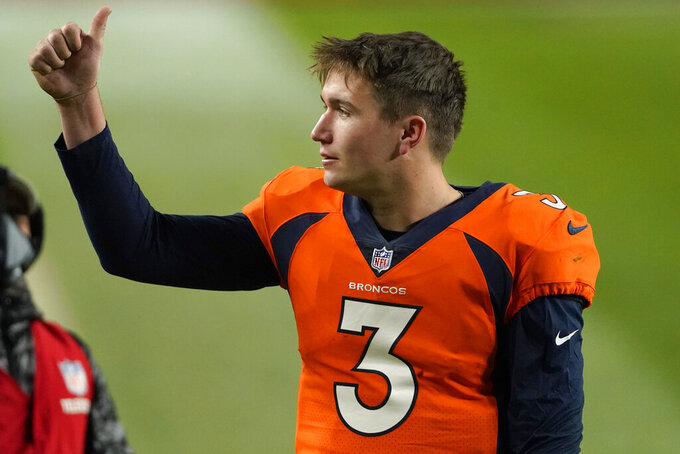 DENVER (AP) — Listen to Vic Fangio and you’d never guess the Broncos were preparing to face a quarterback making just his second career start as the New Orleans Saints’ Taysom Hill is expected to do Sunday at empty Empower Field.

“I was turning on the tape maybe to see something different, but it’s the Saints offense they’ve been running ever since Sean’s been there,” Fangio said of Saints coach Sean Payton, whose decision to start Hill over Jameis Winston paid off in a 24-9 win over the Falcons.

“Other than the quarterback designed runs, which are unique to him, they ran their offense,” Fangio said.

Hill looked comfortable under center, completing all but five of his 23 throws for 233 yards and rushing for 51 yards and two touchdowns in place of Drew Brees, who has multiple fractured ribs.

“He’s a good quarterback,” Fangio said of Hill, the versatile 30-year-old who has overcome an injury-riddled college career to make the most of his many gifts as a 6-foot-2, 230-pound wrecking ball with 4.4-second speed.

In Hill's four years in New Orleans, Payton has found ways to use him at quarterback, tight end, flanker, slot receiver, halfback and fullback and as a blocker or gunner on special teams.

What impressed Fangio was Hill's first start at quarterback.

“If he keeps it up the way he played last week, he’ll be considered the third-best quarterback in Saints history behind Drew Brees and Archie Manning,” Fangio declared.

Safety Kareem Jackson considers it both a blessing and a curse to see Hill taking snaps.

“He’s a versatile guy. He does a lot for that team," Jackson said. "With him having to play quarterback now, a lot of that stuff will be cut down as far as him being on special teams and doing all the other things.

“He’s still a dual-threat guy. He can run and has a strong arm. Preparing for a dual-threat quarterback is always the toughest because you can’t mimic that look in practice as far as their running ability.”

Jeff Driskel, the Broncos’ athletic No. 3 quarterback, gave it his best shot Wednesday but he tested positive for COVID-19 on Thanksgiving, leaving Brett Rypien and Blake Bortles to take over the Hill imitations on the scout team.

The Broncos' QB situation was sent into disarray Saturday when starter Drew Lock, Rypien and Bortles were ordered off the field and sent home when the league deemed them high-risk contacts of Driskel's.

Without any of their four QBs, the Broncos were prepared to run a lot of wildcat sets and have backup running back Royce Freeman play quarterback along with rookie practice squad receiver Kendall Hinton, who played QB for three seasons at Wake Forest.

Other subplots Sunday when the Saints seek their first win in Denver since 1994:

Saints wide receiver Emmanuel Sanders returns to Denver, a city he called “wide receiver heaven” when he arrived to play with Manning before souring on his situation and famously saying the Broncos were in a “world of suck” by the time he was traded to San Francisco last year.

WHO RETURNS FOR DENVER?

With Diontae Spencer going on the reserve/COVID-19 list Friday, the Broncos again had to scramble in their return game. CB Bryce Callahan handled punts and rookie WR Tyrie Cleveland handled kickoffs when Spencer was out three weeks with a shoulder injury. But Callahan is dealing with a foot injury this week.

Asked if he enjoyed matching wits with Payton, Fangio retorted: “No, I’d rather go against somebody less capable than he is. Sean is an excellent play-caller. He’s actually getting better — that’s hard to believe — but I’ve always felt he’s one of the best play-callers in the league.”

Saints RB Alvin Kamara is curious to see whether opponents reduce the frequency with which they assign a defender to spy him because they now also must guard against the threat Hill poses as a scrambler.

“There’s always a chance that he’ll take off,” Kamara said. “So I don’t know if they’re going to put two dudes, like the guy that’s guarding me, if they’re going to take him off me and put him on Taysom, so that I have a better chance of catching the check-down ... but you’ve got to account for Taysom’s ability to run the ball.”