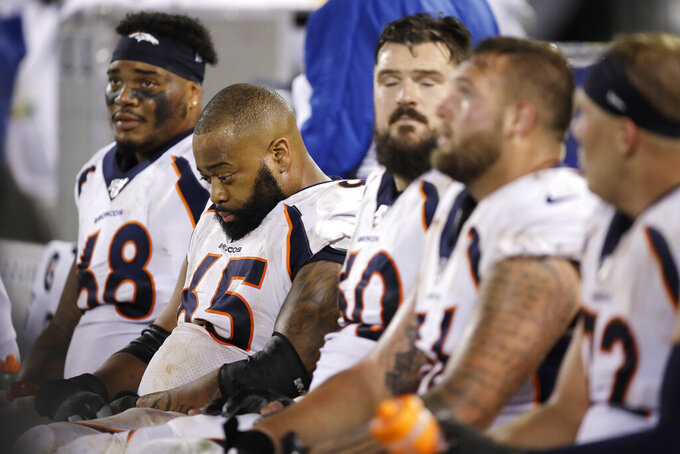 Denver Broncos offensive tackle Elijah Wilkinson (68), offensive guard Ronald Leary (65) and others sit on the bench during the second half of an NFL football game against the Oakland Raiders Monday, Sept. 9, 2019, in Oakland, Calif. Oakland won the game 24-16. (AP Photo/Ben Margot)

Both may still pay off in the long run, but not on a cool night in the Bay Area where the Raiders and the "Black Hole " were fired up to show they didn't need Antonio Brown anyway.

Elway traded away the 10th overall draft pick in April to Pittsburgh, which grabbed Michigan star linebacker Devin Bush, who led the Steelers with 11 tackles Sunday. The Broncos GM used the pair of picks he got in return to select tight end Noah Fant at No. 20 and project QB Drew Lock in the second round.

Linebacker Todd Davis, the team's leading tackler last year, tore a calf on the first day of camp and hasn't practiced since, Lock (thumb) is on IR and Fant had a dud of a debut, gaining 29 yards on two catches but costing Denver 31 yards in losses.

He was dropped for minus-5 yards on a jet sweep on Denver's first snap and committed two costly penalties — an illegal block that wiped out 16 yards and a hold that pushed them back 10 yards and just out of range as Brandon McManus came up short on a 64-yard field-goal try as the first half ended.

This came a day after the other Iowa tight end that went in the first round, T.J. Hockenson , piled up 131 yards and a touchdown on six catches for Detroit.

Joe Flacco's rhythm with his receivers was off as Denver's out-of-sync offense predictably struggled at times, not surprising after playing so little in August.

Blunders either pushed the Broncos out of field-goal range or kept them from reaching the end zone as they stalled repeatedly in the red zone before Flacco finally hit Emmanuel Sanders with a 1-yard TD just before the two-minute warning.

That was Flacco's eighth drive — 12th if you count his preseason cameos.

That's the rub: every other team played their starting QB sparingly, if at all, in the preseason . But Flacco was running a new system installed by first-time offensive coordinator Rich Scangarello after coming over from Baltimore. Yet, he played in just two of Denver's five preseason games and directed just four drives.

Fangio sat all of his offensive starters for the last two preseason games, giving them a 20-day break before the opener.

"Maybe we could have left them in there for another series in the second and third game," Fangio said.

The pass rush. Von Miller and Bradley Chubb expect to easily surpass the 26½ sacks they combined for last year, but they couldn't get close to Derek Carr (22 of 26 for 259 yards, TD).

"They were throwing the ball quick," Miller said, "but we have to find a way to get there."

With Sanders drawing double coverage, second-year WR Courtland Sutton capitalized by setting career highs with seven catches for 120 yards. Sanders had five catches for 86 yards in his return from a torn Achilles tendon.

Not-so special teams: The Broncos gave up a late 72-yard kick return to Dwayne Harris , who burned them for a 99-yard punt return TD in December.

The Broncos' prized free agent singing, Ja'Wuan James, whose four-year, $51 million deal made him the league's highest-paid right tackle, went for an MRI on his left knee amid concerns his injury was serious. WR Tim Patrick sustained a broken left hand and will miss at least a month.

Fangio doesn't figure he has any inherent advantages Sunday when his old team, the Bears, visit Denver. Fangio directed one of the league's top defenses for four years in Chicago before getting his first head coaching job at age 60.

"If anything," Fangio said, "they may have an advantage because they worked with me for four years and there's still two defensive coaches there" that were on his staff.