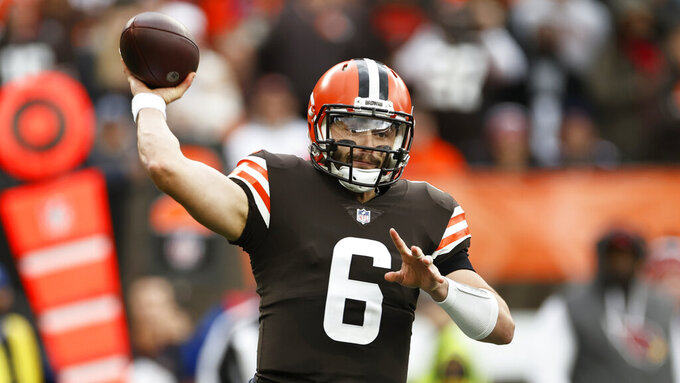 Cleveland Browns quarterback Baker Mayfield throws during the first half of an NFL football game against the Arizona Cardinals, Sunday, Oct. 17, 2021, in Cleveland. (AP Photo/Ron Schwane)

OPENING LINE: Browns by 6, according to FanDuel SportsBook.

TURNOVER DIFFERENTIAL: Broncos minus-2; Browns minus-3.

BRONCOS PLAYER TO WATCH: Star linebacker Von Miller issued a guarantee that he would lead Denver to a win in prime time. This promise wasn’t quite the pledge he made in 2018 when he guaranteed the Broncos would pluck the Cardinals but it was close. Miller has been quiet, however, after winning the AFC Defensive Player of the Month honors for September. He's had just one-half sack in three straight losses.

BROWNS PLAYER TO WATCH: QB Case Keenum makes his first start since 2019 in place of Baker Mayfield, who is out with a left shoulder injury. The Browns signed Keenum as a free agent before last season as protection in case Mayfield struggled for a second year in a row. Keenum's experience in coach Kevin Stefanski's system — they were together in Minnesota — makes him an ideal Plan B.

KEY MATCHUP: Miller vs. Browns O-line. Denver's dominant edge rusher seems intent on wrecking Cleveland's offense, smiling this week when he said he'll “kill” whoever's in front of him. It may take two or three blockers to protect Keenum.

KEY INJURIES: Broncos starting LBs Alexander Johnson and Josey Jewell are both out for the year with torn chest muscles. ... OLB Bradley Chubb (ankle surgery) is about a month away from returning. ... Rookie ILB Baron Browning is out with a concussion. ... OLB Andre Mintze is on IR with a pulled hamstring. ... QB Teddy Bridgewater (foot) and TE Noah Fant (foot) were both limited at practice this week. ... WR Jerry Jeudy (high right ankle sprain) has been sidelined since getting hurt in the opener. ... Mayfield played the past four weeks with a complete tear to the labrum in his non-throwing shoulder. ... Keenum has made 62 career starts, most recently with Washington in 2018. ... The Browns will also be without their dynamic backfield duo as RBs Nick Chubb and Kareem Hunt both have calf injuries. Chubb is missing his second straight game while this is the first of at least three in a row for Hunt, who went on injured reserve. ... Browns starting rookie LB Jeremiah Owusu-Koramoah is out with a high ankle sprain that landed him on IR. ... Browns starting offensive tackles Jack Conklin (knee) and Jedrick Wills Jr. (ankle) didn't practice during the short week. ... WR Odell Beckham Jr. is also questionable with a shoulder injury. ... WR Jarvis Landry could return after missing four games with a knee sprain.

STATS AND STUFF: Bridgewater is coming off his worst game of the season. He was hit 17 times, sacked a season-high five times, threw three interceptions and lost a fumble. Moreover, RG Graham Glasgow stepped on his left foot on a late touchdown throw, and Bridgewater was hobbled this week. … TE Noah Fant led Denver with nine catches for 97 yards and a touchdown last week, but he’s becoming more and more of a liability in the run game. ... Alexander Johnson and Josey Jewell are being replaced by Micah Kiser and Justin Strnad, who will have the green helmet sticker indicating he’ll have the radio to relay defensive play calls. ... K Brandon McManus is perfect so far this season, nailing all 12 of his field-goal attempts and converting all 12 extra points. … Miller won the player of the month honors after getting four sacks in his return after missing 2020 with an ankle injury. But Miller has just half a sack in three game this month and he’s had just two tackles in each of his past two games. ... The Broncos’ six takeaways so far give them 39 in 38 games under head coach Vic Fangio, whose last Chicago Bears defense in 2018 had 36 takeaways. ... The Browns have lost two straight games under coach Kevin Stefanski for the first time in his two seasons. ... Mayfield had three turnovers last week, two on strip-sack fumbles he could have avoided. ... Keenum's experience gives Stefanski some comfort. The 33-year-old QB spent 2018 in Denver. ... Without Chubb and Hunt, RB D'Ernest Johnson will make his first career start. ... Browns DE Myles Garrett leads the NFL with eight sacks and has 50 in 57 games. Only Reggie White (40) and Derrick Thomas (54) reached 50 in fewer games. ... Cleveland's defense has given up 84 points in the past two games and has been plagued by communication breakdowns in the secondary. ... Stefanski has been aggressive in going on fourth down, but with limited success as the Browns have converted just 6 of 15.