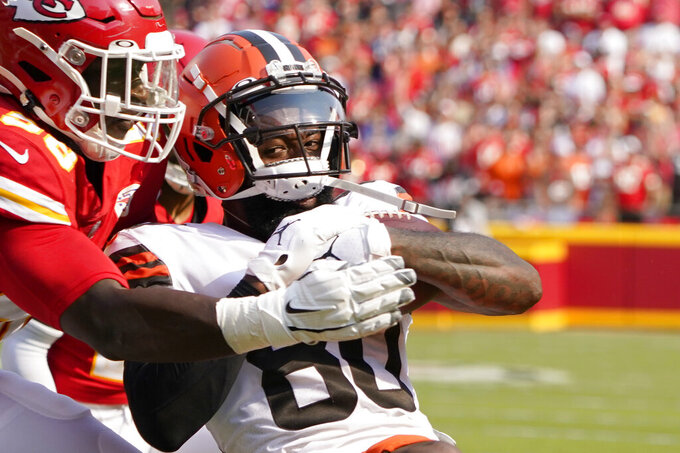 FILE - Cleveland Browns wide receiver Jarvis Landry, right, scores past Kansas City Chiefs defensive tackle Tershawn Wharton during the first half of an NFL football game in Kansas City, Mo., in this Sunday, Sept. 12, 2021, file photo. Landry has been activated from injured reserve to possibly help Cleveland's injury-ravaged offense Thursday night, Oct. 21, 2021, against the Denver Broncos. One of the league's most consistent pass catchers, Landry has been out since he sustained a sprained medial collateral ligament against Houston on Sept. 19. (AP Photo/Ed Zurga, File)

One of the league's most consistent pass catchers, Landry has been out since he sprained his medial collateral knee ligament while being tackled in the first quarter against Houston on Sept. 19.

Landry returned to practice last week and increased his activity over the past few days.

Beckham got hurt in last week's loss against Arizona. It was his fourth game after undergoing offseason knee surgery. Beckham did not practice this week.

Landry is a team leader and his presence can have a calming effect and help backup Case Keenum, who is making his first start since 2019.

The 28-year-old Landry is one of just five players with at least 642 receptions since 2014. Before he got hurt, Landry had caught at least two passes in 111 consecutive games — the fourth-longest streak in history.

Landry has caught at least 72 passes in each of his first seven seasons, and had 976 yards or more five times. He led the league with 112 receptions in 2017.