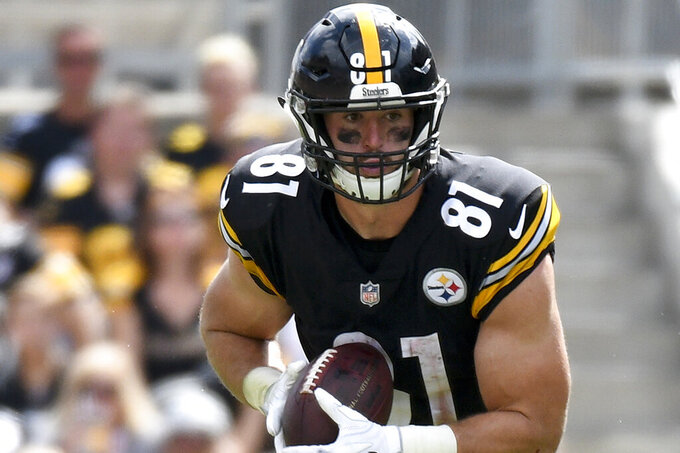 The Browns tweaked their roster Monday as they began preparing for Sunday's opener at Carolina. Both Haeg and James were on the practice field during the portion open to media members.

Conklin has been doing more in team drills during practice lately, but didn't play in the preseason.

“Definitely want to see how today’s practice went,” Stefanski said following the Browns' one-hour workout. "It's all about for Jack stacking days on top of each other, back-to-back practices and those type of things.”

Cleveland's not deep at tackle. Veteran Chris Hubbard, who has suffered season-ending injuries the past two years, hasn't practiced in two weeks, and James Hudson III, a fourth-round pick in 2021, may not be ready for significant playing time.

“A veteran," Stefanski said. "Somebody who our personnel staff had looked at quite a bit. Just felt like he was a veteran who could add depth to the position.”

Stefanski stopped short of saying Haeg is any kind of insurance policy.

“Not in those words," he said. "I would just tell you tackle depth is really important in this league and felt like he was somebody who was available that was a good player.”

James was not in training camp with anyone this summer. The 6-foot-7, 247-pounder has 157 career catches and 1,522 yards with 12 touchdowns in 102 games. He's played for Pittsburgh, Detroit and Chicago.

James gives Stefanski another proven option at tight end along with David Njoku and Harrison Bryant.

"I remember seeing him my rookie year when he was in Pittsburgh,” Njoku said. “And he’s a great talent. So I’m excited that he’s with us.”

NOTES: This season's opener has more buzz because the Browns will be facing Baker Mayfield, who won Carolina's starting QB job after being released by Cleveland. Safety John Johnson III expects Mayfield to be at his best. “He’s confident,” Johnson said. “That was probably a big thing that happened last year, maybe the confidence wavered a little bit. But he looks confident, looks healthy, looks like he’s whipping the ball, so it’s going to be a challenge.” ... All-Pro DE Myles Garrett was not at practice, but Stefanski expected him to return later Monday.