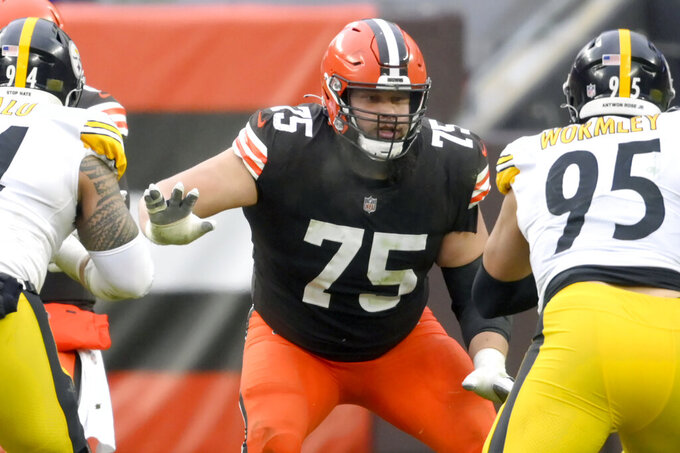 The loud bangs signified something more for the Pro Bowl guard — a second chance.

Cleveland's longest-tenured player, Bitonio was activated from the COVID-19 list Friday after missing last week’s win, and he'll finally make his long-awaited postseason debut Sunday as the Browns face the Kansas City Chiefs in the divisional round.

Stuck watching the Pittsburgh game from home because of the virus, Bitonio felt helpless. But the Browns came through to extend their season and to give the popular Bitonio, scarred from years of losing since coming to Cleveland in 2014, his playoff wish.

“It was just really cool to see those guys step up and make plays,” Bitonio said Friday following his first practice in two weeks. "Obviously, I'm pumped to keep playing and ready to get after it this weekend.”

After testing positive with COVID-19 — on the same day as Browns coach Kevin Stefanski — Bitonio isolated at home and participated in team meetings last week, but couldn't join his teammates for Cleveland's first postseason appearance since the 2002 season.

It was a cruel development for Bitonio. But as he tried to stay calm while watching TV from a chair in his basement, his teammates, many of whom dedicated their performance last week to him, busted out to a jaw-dropping 28-0 lead and then held on 48-37 for Cleveland's first playoff win since 1994.

Bitonio said he mostly kept it together, except for the game's first play when Pittsburgh's first snap rocketed over quarterback Ben Roethlisberger's head and into the end zone. The Browns recovered it for a touchdown 14 seconds into the game.

“I stood up for that one and made sure we got the recovery,” he said with a laugh. “It was more of a shock thing, like make sure there are no penalties and make sure everything is right.”

When the game ended, his neighbors got to work.

“They were outside of my house going crazy and lighting off fireworks,” he said. "My wife got some of the footage on video. It was pretty cool. It was just cool how I was kind of part of the celebration in the sense where you do not really get to experience that when you are playing in the games.”

Pretty cool. That's how the Browns feel now about Bitonio being back.

"Elated for Joel,” Browns general manager Andrew Berry said on a Zoom call with local writers. “He’s been here his entire career. He has been a leader, consummate teammate, everything that you could really want out of a player.

“We were all heartbroken when he wasn’t getting the opportunity to play in his first playoff game, so for us to be able to activate him today and for him to be able to take his place in the starting lineup this weekend against the Chiefs, it really does mean everything.”

Bitonio was one of several Browns players and coaches to be sidelined over the past three weeks with the coronavirus. But top cornerback Denzel Ward came back Wednesday, Stefanski on Thursday and Bitonio and three assistant coaches on Friday.

The Browns actually got to practice this week.

Bitonio's return is a huge boost for Cleveland's solid offensive line, which has had to adjust numerous times over the past few weeks because of injuries and COVID-19.

Last week, Michael Dunn, who barely played all season, started in Bitonio's spot and played well before suffering a season-ending calf injury. He was replaced by Blake Hance, who had just been signed off the New York Jets' practice squad and first met Browns quarterback Baker Mayfield in the locker room before the game at Heinz Field.

While Bitonio's return is a welcome development, the Browns have another worry as All-Pro right tackle Jack Conklin is questionable for Sunday's game with a hamstring issue. He was limited in practice Friday, and Stefanski said it's too early to know if he'll play.

Kendall Lamm came in when Conklin got hurt last week.

“He's been a good player for us,” Stefanski said of Conklin. "Obviously, you want to go into the game with the full complement of your players. We will see how it shakes out.”