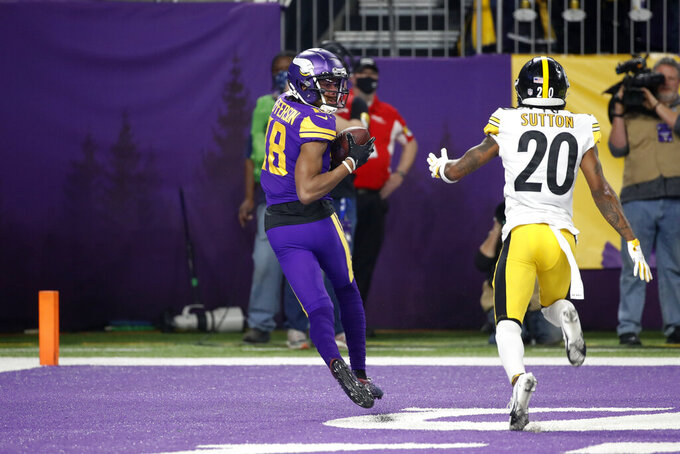 The fantasy playoffs are at hand, and scoring is at a premium so make sure these players are in your lineups. It’s not the time to get fancy or cute, it’s time to roll with the best bets to score going into Week 15 of the fantasy season.

Foreman is for all intents and purposes the lead back in Tennessee while Derrick Henry is out injured. Henry could return for the playoffs, but until that happens, Foreman is our man. He’s either surpassed 100 yards or scored in his past two games, as he’s established himself as the primary ball carrier over Dontrell Hilliard and now Jeremy McNichols. He’ll find room to run against the Steelers, who are our sixth-best matchup for opposing runners, having allowed 13 TDs to RBs this season which is the seventh-highest mark.

Chubb is set up to have a field day against the Raiders this week, as Las Vegas has allowed 18 TDs to RBs this season, the third-highest mark in the league. They’ve also given up the second-most fantasy points to RBs over the past five weeks, so it’s not as if they’re getting better in that department. Also, Kareem Hunt may not play this week, meaning Chubb is even more unlikely to leave the field on or around the goal line.

Cook had his best game of the season last week in a game that many people didn’t even have him playing to start the week. The 23.42% TD dependent Cook also scored twice in Week 14 to make it four TDs in the past four games that he’s played in. He’ll face a Bears team this week that’s a top-12 matchup for opposing RBs going into Week 15.

The Broncos are certainly getting their money’s worth from Gordon, who may be the second-best RB on the team yet remains the one they use the most on game days. Gordon out-touched rookie Javonte Williams 24-15 as the 1A in the Broncos backfield in Week 14, when he scored twice. This week, he’ll go up against a Cincinnati defense that has allowed 11 TDs to RBs and is smack dab in the middle matchup wise.

Edwards-Helaire has scored three TDs over his past three games, including two last week against the Raiders. The 36.36% TD dependent RB gets another RB friendly matchup in Week 15 against a Chargers team that’s a bottom-four matchup for opposing WRs, but a top-three matchup for opposing RBs. This type of defense is ideal for Edwards-Helaire, who shouldn’t have any trouble racking up touches and TDs this week.

Scoring five TDs in his past six games, Justin Jefferson has reestablished himself as the go-to red-zone target for the Vikings, especially since Adam Thielen is ailing with an ankle injury. Thielen could miss at least one more game, so Jefferson will be leaned on heavily this week against a Chicago team that has allowed the second-most TDs (17) to WRs this season.

Averaging 12 targets and 92 yards in his past five games, and scoring three TDs over that time, Johnson is likely to have a big game against the Titans’ secondary. The Titans have allowed 16 TDs to WRs this season, the third-highest mark, and they’ve allowed the second-most fantasy points to WRs this season (27.6) behind only the Vikings.

Boasting a robust 34.96% TD dependency, Samuel has scored six times in the past four games he’s played in. Five of those scores have been rushing TDs, but we’ll take them any way we can get them. This week he’ll face a Falcons team that is our second-best matchup for opposing WRs going into Week 15, having allowed 16 TDs to WRs this season.

Evans has probably been on this list more than any other WR this season, and it’s for good reason. Only one WR, Cooper Kupp, has more TDs (12) than Evans (11), but Kupp doesn’t have the matchup that the 42.44% TD dependent Evans has in the Saints this week. Our ninth-best matchup for opposing WRs going into Week 15, the Saints have allowed the third-most receiving yards to WRs this season and they’ve given up a healthy 12 TDs as well. Evans will continue to roll against a team that he’s already scored on in their first meeting this season.

Cooper is starting to heat up again after missing a couple of games because of COVID-19, scoring last week against Washington. His opponent this week, the Giants, are a top-10 matchup for opposing WRs and a team that Cooper has already found the end zone against once in their first meeting this season. With a sustainable 34.78% TD dependency, Cooper is a strong bet to score in the first week of fantasy playoffs.