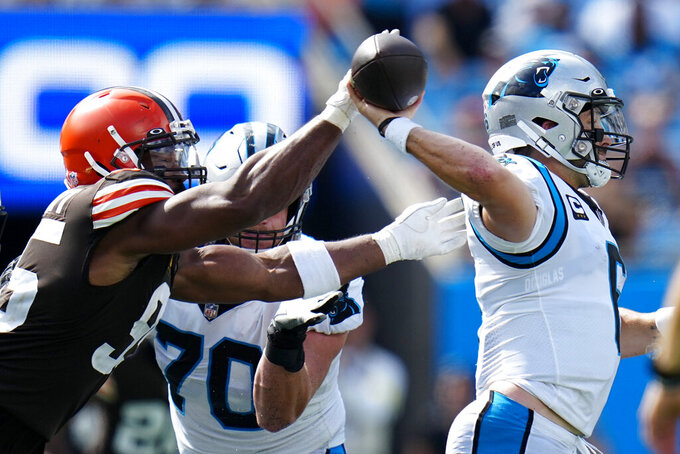 With Deshaun Watson sidelined while serving his 11-game NFL suspension, Cleveland figured to lean on its strong running game, trust the defense and count on improved special teams, led by a rookie kicker with an other-worldly right leg.

They followed that plan almost to a tee Sunday.

The Browns won their first opener since 2004, getting a 58-yard field goal from ultra-confident Cade York with 8 seconds left — and after two late calls went their way — for an emotional, exhausting 26-24 victory over Carolina and Panthers quarterback Baker Mayfield, who nearly got revenge against his former team.

It wasn't easy. It rarely is for the Browns, who have a habit of getting in their own way.

They overcame late defensive breakdowns and are not only 1-0 for the first time in 18 years, but a week closer to getting back Watson, who can start practicing again next month with an eye on playing in Week 13.

Until then, it's about staying in the hunt. Survival.

A collective exhale could be felt back in Ohio when York's kick sailed through the uprights, allowing the Browns to escape national embarrassment that would have come losing to Mayfield, who was traded by Cleveland in July.

Owner Jimmy Haslam celebrated by emphatically punching the air on the sideline while guard Wyatt Teller dropped to his knees on the field as if in prayer. York, who was 3 the last time the Browns won an opener, seemed unfazed despite making the longest kick by a rookie in Week 1 in NFL history.

Afterward, quarterback Jacoby Brissett choked back tears while expressing gratitude for his chance to start in Watson's absence. The 29-year-old did his part, making a couple tough throws to set up York's winner.

“Obviously, our defense played really well,” Teller said Monday on a Zoom call. "There were a handful of plays that changed it or that brought them close. For the most part, the three phases of football working together, complementary football, that's how you win games.”

And, sometimes, with luck.

The officiating crew twice ruled in Cleveland's favor on the Browns' final drive, calling roughing the passer on Carolina and then waving off a grounding penalty against Brissett, who was trying to stop the clock.

“The spike, whatever they ruled,” he said. "I will go with the officials on that one.”

Cleveland's two-headed running back was scary.

Nick Chubb rushed for 141 yards, Kareem Hunt scored a pair of touchdowns and Cleveland's talented backs were finally in the backfield together after Stefanski resisted using that formation the past two seasons.

Chubb was sensational, breaking tackles and darting to daylight as the Browns rolled up 217 yards on the ground.

“He had two runs late in the game consecutive that are as good as there are in the NFL,” Stefanski said. "Making guys miss, jumping over people and playing physical. It was a site to behold.”

Cleveland's defense had three good quarters and one really bad one.

After going up 23-14 in the fourth quarter, the Browns got burned for a 75-yard pass by Mayfield, who hit a wide-open Robbie Anderson behind the secondary.

Cornerback Greg Newsome II thought he was getting deep help from safety Grant Delpit, and the miscommunication was costly.

"Yes, there are miscommunications, but those type of things should not happen, and we will get it fixed,” Stefanski said.

Wide receiver Donovan Peoples-Jones led the Browns with six catches for 60 yards. Several of the receptions came in tight coverage, and he made a key grab on a perfectly placed throw by Brissett to help set up York's late kick.

After releasing Jarvis Landry, the Browns are counting on Peoples-Jones to step up in his third pro season. This was a promising start.

The Browns lost Pro Bowler Jakeem Grant Sr. to a season-ending knee injury in training camp, forcing them to try other options. After Felton's performance, it wouldn't be surprising to see some auditions this week in practice.

Stefanski said the Browns emerged healthy except for the usual bumps and bruises. ... Starting right tackle Jack Conklin was not active Sunday, but Stefanski said the former All-Pro didn't not suffer any setbacks in his return from major knee surgery in December. “He's really close,” Stefanski said.

60 1/2: Career sacks for All-Pro end Myles Garrett, who twice got to Mayfield. Garrett is just 1 1/2 sacks shy of matching Clay Matthews' team record. Matthews needed 232 games to get 62. Garrett has played in 68.

The Browns will play their home opener Sunday against the New York Jets, who started 37-year-old quarterback QB Joe Flacco while losing their opener and have dropped 13 straight games in September.