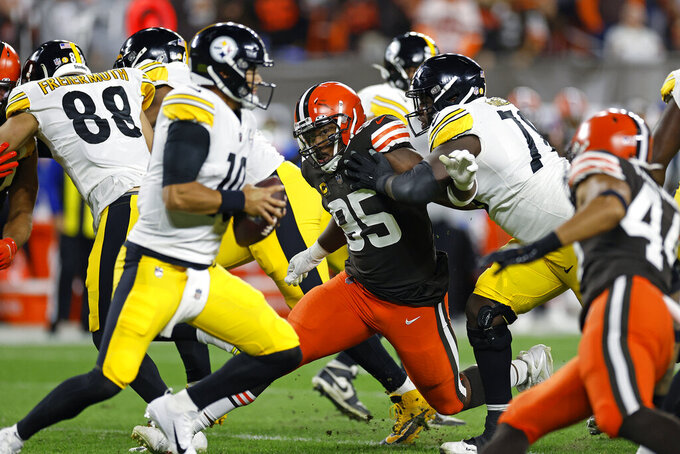 As of 11:50 p.m., Garrett was still being evaluated following the accident, which happened on a rural road a few hours after the team's practice. The Browns did not provide any details about Garrett's injuries or condition.

Garett's agent, Nicole Lynn, said in a statement posted on Twitter that the star has been “alert and responsive” while receiving medical attention. She said, “we are waiting to learn the extent of his injuries.”

On behalf of Garrett's family, Lynn thanked medical personnel for getting the 26-year-old and an unidentified female passenger out of his mangled vehicle and transporting them to a hospital.

Lynn told AP in a text message that Garrett did not break any bones and she expects him to be discharged ether Monday night or into Tuesday.

The Ohio State Highway Patrol said it responded to a rollover crash around 3 p.m. When troopers arrived, they found a gray Porsche 911 Turbo S on the right side of the road with extensive damage.

The crash is still under investigation, but the highway patrol said “impairment from alcohol/or drugs is not suspected.” Garrett and his passenger were wearing safety belts.

Garrett and his teammates returned to practice Monday at the team's facility in Berea, Ohio, following a long weekend after their 29-17 home win over the Pittsburgh Steelers on Thursday night.

The 26-year-old Garrett was in the locker room following the morning workout.

It's not yet known if Garrett's playing status for Sunday's game in Atlanta will be altered by the accident.

Garrett needs just one sack to become the team's career leader. He was held to two assisted tackles in Thursday's win over the Steelers. He missed one practice last week with an unspecified neck issue.

One of the NFL's most dominant players, Garrett was selected with the No. 1 overall pick by Cleveland in 2017. He set a team single-season record with 16 sacks last season, and has recorded 61 1/2 sacks in 71 games.

Garret has three sacks and forced a fumble this season. The three-time Pro Bowler is often double- and triple-teamed by blockers. Last week, Garrett got even more attention from the Steelers as Cleveland was missing end Jadeveon Clowney due to an ankle injury.

Clowney didn't practice Monday, but hasn't been ruled out yet for the Falcons.