Browns' Garrett: 'No rivalry' with Mayfield before opener 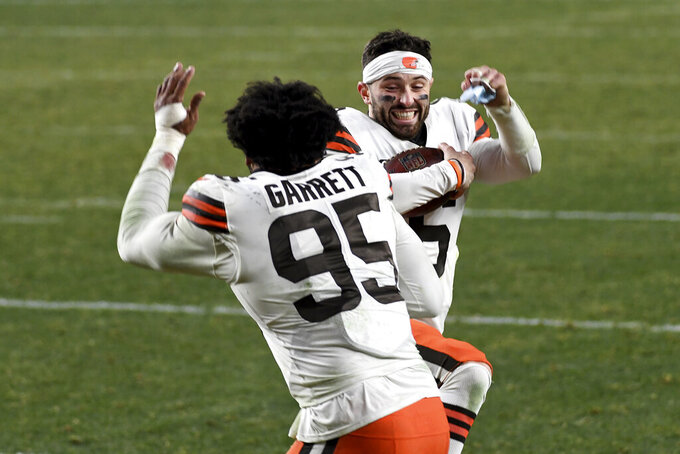 FILE - Cleveland Browns quarterback Baker Mayfield (6) celebrates with defensive end Myles Garrett (95) after defeating the Pittsburgh Steelers 48-37 during an NFL wild-card playoff football game, Sunday, Jan. 10, 2021, in Pittsburgh. The hype surrounding the Browns' upcoming reunion with Mayfield has already begun and figures to build. Garrett plans to treat it like any other game.(AP Photo/Justin Berl, File)

BEREA, Ohio (AP) — The hype surrounding the Browns' upcoming reunion with Baker Mayfield has already begun and will undoubtedly build.

As NFL openers go, this one's got it all.

Myles Garrett plans to treat it like any other game.

Cleveland's All-Pro defensive end did his best to downplay the Week 1 matchup against Mayfield, who won Carolina's starting job after the Browns discarded and then traded the divisive quarterback this summer.

Mayfield might be seeking revenge or redemption. That doesn't mean Garrett wants to pay back Mayfield for anything.

Garrett insists he's no more motivated to face Mayfield than any other QB.

“Yes, he was here, but that doesn’t mean I have an added sense of urgency to get to him,” he said. "I want to play my best and whatever’s in the cards. If I can help my team win, if I can put them in the best position to win, I’m going to do that. And if I can get a couple sacks along the way, I would kind of enjoy that, too.”

Chosen by Cleveland with the respective No. 1 overall pick in 2017 and 2018, Garrett and Mayfield did some good things together. They helped the Browns end a long playoff drought, win their first postseason game since 1994, and returned some respectability to a franchise that has too often gotten in its own way the past two decades.

And while they're no longer teammates, Garrett doesn't view Mayfield as an enemy. He always felt the matchup with Mayfield was inevitable, assuming he would beat out Sam Darnold to start for the Panthers.

“Whether he won it or not I knew I had to play the Panthers,” Garrett said. "So I’m happy that he won it. I don’t wish any ill upon him, but I wasn’t expecting to be looking at any other quarterback.”

Garrett knows Mayfield as well, if not better, than any quarterback after facing him in practice for four years. He's seen him play like a Pro Bowler and look completely lost trying to force a pass into tight coverage.

Garrett also recognizes that Mayfield, who played nearly all last season with an injured left shoulder, is a fiery competitor. He believes a change of scenery may help Mayfield find a better version of himself.

“He has tendencies,” Garrett said. "I’m sure he likes to throw the ball in certain spots along the field. But he has different targets. He has a different line. So he’s going to have to change as well. He has different coaches who are going to work with him on those things that they’ve seen that he likes to do.

“So I’m sure we’re going to see not a completely different Baker, but someone who’s worked on some of his weaknesses and, like I said, his tendencies, to be a more complete player and diversify himself.”

Mayfield's final game for the Browns couldn't have been much worse.

On the road in Pittsburgh, he was sacked nine times — four by Steelers star and NFL Defensive Player of the Year T.J. Watt — in a 26-14 loss and got so beaten up that he sat out the season finale against Cincinnati before having surgery.

Garrett said it doesn't make sense to scout what made the Steelers successful because the Browns have a different defensive scheme and Carolina might try some new things with Mayfield.

He'll do his own film study, looking for subtle changes in Mayfield's game.

“Has he changed his depth at all?" Garrett said. “Is he stepping up more? Is he stepping back in the pocket, seeing where he’s locating himself, trying to make plays?”

NOTES: Suspended QB Deshaun Watson is continuing to get practice reps before leaving the team on Aug. 30 to begin serving his 11-game NFL ban. "Everything that Deshaun does out here on the practice field when it comes to individual, show-team reps, post-practice work and off to the side work, I think it all adds up,” coach Kevin Stefanski said. ... RT Jack Conklin (knee surgery) got more snaps with Cleveland's starting offense in team drills as he continues to make progress. ... Stefanski has not divulged how much he'll play his starters in Cleveland's preseason finale against Chicago on Saturday.