Browns get back 3, not top corner Denzel Ward for Steelers 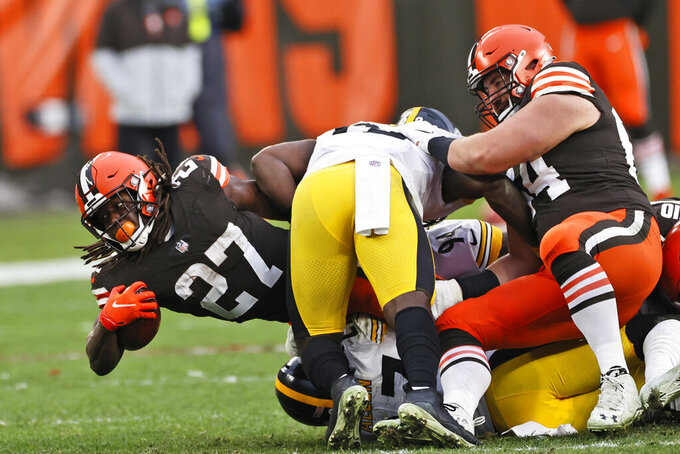 Cleveland Browns running back Kareem Hunt (27) stretches for yardage during the second half of an NFL football game against the Pittsburgh Steelers, Sunday, Jan. 3, 2021, in Cleveland. (AP Photo/Ron Schwane)

CLEVELAND (AP) — The Browns flew to Pittsburgh for the playoffs with some reinforcements — and missing some regulars.

Top cornerback Denzel Ward stayed in Cleveland as he recovers from COVID-19, leaving a massive hole in the Browns' secondary as they get ready to face Ben Roethlisberger and the Steelers in an AFC wild-card game on Sunday night.

The Browns, who were limited to just two practices this week because of another wave of positive COVID-19 cases, including coach Kevin Stefanski, were hoping Ward would be back in time after he tested positive with the virus last week.

However, he's still not ready to return and the Browns may miss him dearly.

And while Cleveland's players took a short flight to Pennsylvania on Saturday, the team's coaches made the 2-hour drive in separate cars to lessen the risk of COVID spread and further infections in the hours leading up to kickoff.

All-Pro right tackle Jack Conklin also drove by himself after being listed Friday on the injury report as questionable with an “illness.” It's believed Conklin was exhibiting COVID-like symptoms and was being isolated from his teammates.

As long as he doesn't test positive on Sunday, he'll be able to play against the Steelers and the Browns need him with Pro Bowl left guard Joel Bitonio already out.

Cleveland finally caught a bit of a break Saturday as safety Ronnie Harrison, tight end Harrison Bryant and linebacker Malcolm Smith were activated from the COVID-19 list, giving the Browns some much needed depth for their first playoff game since the 2002 season.

That would have been Ward's job, but he's out along with cornerback Kevin Johnson and potentially corner Terrance Mitchell as well.

Johnson tested positive this week while Mitchell’s status is unclear. He’s been out — an issue not tied to an injury — the past two days and is listed as questionable. If he can’t play, Tavierre Thomas would likely take on a larger role.

It's been a strange few days in a strange week in a strange season for the Browns, who will have to end a 17-game losing streak at Heinz Field to keep it going.

Stefanski can only be in touch with his staff and players until they leave the locker room and he'll watch the game from his basement at home in Rocky River, Ohio. Bitonio will also miss his first playoff game as a pro after he tested positive.

League rules require anyone testing positive to isolate for 10 days.

Harrison was just placed on the COVID list Thursday. However, it turns out his test was a false positive and he was cleared to play after subsequent negative tests.

“It was good to get Ronnie back,” defensive coordinator Joe Woods said Thursday. “The guys love being around Ronnie. He is just like the kid on the playground who just loves to play football. He brings a lot of energy to our defense."

The Browns will also have safety Jovante Moffatt after the NFL's medical experts deemed he was not a close contact.

Along with Stefanski, Ward and Bitonio, the Browns will not have wide receiver and special teams player KhaDarel Hodge, who is on the COVID-19 list along with offensive line coach Bill Callahan, assistant line coach Scott Peters, tight ends coach Drew Petzing and defensive backs coach Jeff Howard.

On Friday, the Browns listed All-Pro defensive end Myles Garrett (shoulder) as questionable, but Stefanski said he expects Garrett to play, and the dynamic edge rusher promised to make the most of his playoff debut.

"I am going to play like my hair is on fire and like I will never get another chance at it,” Garrett said.