Browns handed more tough lessons in another loss to Chiefs 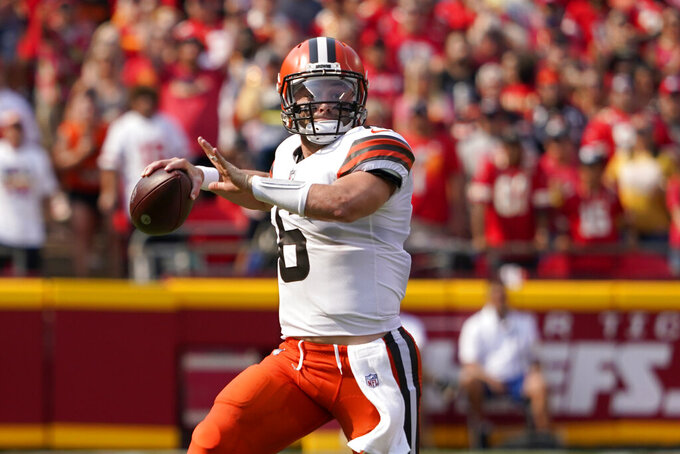 CLEVELAND (AP) — Baker Mayfield lay face down in the grass, slamming his hands in frustration into the Arrowhead Stadium turf after the Browns' final mistake.

Revenge against Kansas City slipped away.

Unable to put away the Chiefs for the second straight game, this time because of two critical second-half turnovers and Mayfield's late interception, the Browns let the defending AFC champions off the ropes and fell 33-29 Sunday in a season opener that lived up to the hype.

It was a performance of highs and lows: from coach Kevin Stefanski's impeccable play calling in the first half to punter Jamie Gillan's muffed snap, which gave magical KC QB Patrick Mahomes a short field and the Chiefs' needed momentum.

“Disappointed,” Stefanski said Monday on a Zoom call. “We have to be able to play clean football, and that's for 60 minutes.”

The Browns played a nearly perfect first 30 minutes, building a 22-10 halftime lead while overwhelming the Chiefs, who didn't have any answers for Cleveland's multi-faceted offense.

But star running back Nick Chubb's third-quarter fumble, followed soon after by Gillan's blunder on Cleveland's first attempted punt of the season triggered memories of the Jan. 17 playoff loss to the Chiefs — another game the Browns could have won.

“We've got to find a way to finish,” said cornerback Denzel Ward.

Painful as they may be, these are necessary growing pains for a Cleveland team with Super Bowl aspirations. The Browns have shown they play with the league's elite. But until they start beating some of the top teams consistently by showing poise down the stretch, they'll remain among the second tier — good, not great.

“We have to do better,” said center JC Tretter. “There are no moral victories. We have to play better. We have to finish better. We won't see the Chiefs for a while, and we'll worry about them when it comes about. But we know we haven't beat them yet, and if we need to, we need to perform at a higher level to do that.”

And, right or wrong, most of the pressure is on Mayfield.

He matched Mahomes pass for pass, finishing 21 of 28 for 321 yards. But with a chance to rally the Browns to a comeback win, Mayfield tried to do too much. With the play breaking down, he threw his pick when he needed to throw the ball away.

Another loss. Another lesson.

“That’s just the nature of this beast. We have to learn from it and get better because of it.”

Stefanski could do no wrong in the first half. Aggressive with his play calling from the start, he had Kansas City's defense reeling as the Browns dialed up big chunk plays while outshining the Chiefs' famed offense.

The inability to slow down Kansas City stars Tyreek Hill (11 catches, 197 yards, 1 TD) and Travis Kelce (6, 76 and 2 TDs) remains as big a problem as it was in the postseason.

Cleveland seemed content to play soft coverage, allowing Mahomes to throw underneath and easily move the ball. That has to change if the teams meet again.

Rookie WR Anthony Schwartz made three catches for 69 yards while filling the role that would have been Odell Beckham Jr's.

Mayfield hooked up with Schwartz for a 44-yard pass in the first half that made Kansas City's defense honest. A fourth-round pick from Auburn, Schwartz was slowed by leg injuries much of the summer.

Gillan took his eye off the ball, dropped the snap and then panicked by trying to run for a first down.

“If something like that happens, you have to get the ball off and punt it and he knows that,” Stefanski said.

Starting left offensive tackle Jedrick Wills Jr. may have avoided a serious left ankle injury when he got tangled up while blocking on Jarvis Landry's touchdown run in the first quarter.

Stefanski said Wills is “day to day,” which is better than “week to week.”

As for Beckham, Stefanski said the team will continue an “appropriate plan” with the star receiver, who is coming off major knee surgery. Beckham looked good in practice last week, but was listed as questionable before being inactive.

24 — Cleveland's total yardage on its last three drives, which ended with Gillan's gaffe, a punt and Mayfield's interception.

After a mostly positive performance, the Browns will be welcomed home Sunday against the Houston Texas — and former Browns QB Tyrod Taylor — by a frothing FirstEnergy Stadium crowd, their largest since the COVID-19 pandemic began.