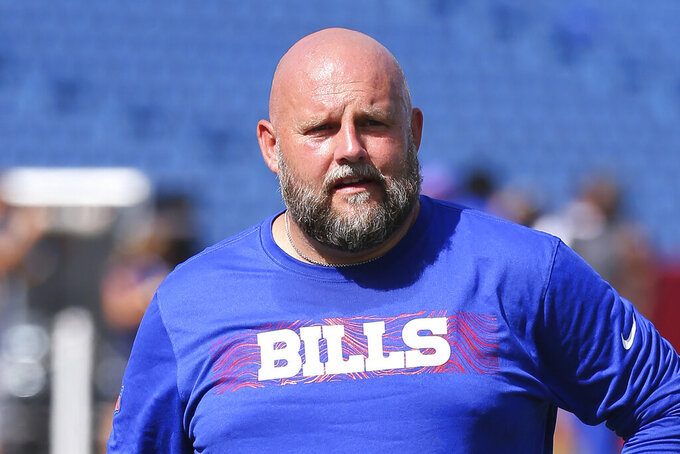 FILE - In this Sept. 16, 2018, file photo, Buffalo Bills offensive coordinator Brian Daboll walks off the field prior to the game against the Los Angeles Chargers, in Orchard Park, N.Y. After taking a short break, the Browns are resuming their coaching search by interviewing Bills offensive coordinator Brian Daboll, who previously worked in Cleveland. (AP Photo/Rich Barnes, File)

CLEVELAND (AP) — Brian Daboll spruced up his resume and improved as a coach since the previous time he was in Cleveland nearly a decade ago.

The Browns haven't changed much.

Daboll, who got his first offensive coordinator position in the NFL with the Browns under Eric Mangini, interviewed Monday for Cleveland's coaching job as one of the team's top candidates decided to go elsewhere.

After a one-day break, the Browns resumed their search by meeting with Daboll, who just completed his second season as Buffalo's offensive coordinator.

The 44-year-old Daboll is the fifth candidate to meet with the Browns' search committee led by owner Jimmy Haslam, who is trying to find the right coach after firing five since buying the team in 2012.

As Daboll arrived at Cleveland's facility in Berea, Ohio, former Packers coach Mike McCarthy was agreeing to become coach of the Dallas Cowboys, a person familiar with the decision told the Associated Press. The person spoke on condition of anonymity because the team has not made an announcement.

McCarthy was the first candidate interviewed last week by the Browns and was presumed to be near the top of Cleveland's wish list because of his winning record, experience working with quarterbacks and background with Browns assistant general manager Eliot Wolf in Green Bay.

Daboll was Cleveland's offensive coordinator under Mangini in 2009-10. The Browns went a combined 10-22 in those two seasons and shuffled through a long list of quarterbacks, including Brady Quinn, Derek Anderson, Jake Delhomme, Seneca Wallace and Colt McCoy.

Daboll was let go when Mangini's staff was fired and he had stops in Miami (2011) and Kansas City (2012) before he rejoined New England's staff with Bill Belichick. Daboll began his pro coaching career as a defensive assistant with Patriots in 2000 and won three Super Bowls in his first stint with the team.

Daboll just completed a successful two-year stint with the Bills, helping develop young quarterback Josh Allen, who led Buffalo to a playoff berth before losing at Houston on Saturday.

The Bills selected Allen with the No. 7 pick in 2018 — six behind Mayfield — and the former Wyoming QB showed major improvement in Year 2. Allen led the Bills to 10 wins while passing for 3,089 yards and running for 510 and nine touchdowns.

Daboll could be a good option because of that work with quarterbacks as the Browns need someone to fix Baker Mayfield, who was wildly inconsistent and regressed in his second season.

League rules stipulate that a team cannot complete a contract with a coach in the playoffs until his team has been eliminated from the postseason.

So Daboll is now free to sign if the Browns want him as is Patriots offensive coordinator Josh McDaniels, who is expected to meet with the Browns later this week. McDaniels has ties to northeast Ohio and with McCarthy out of the picture could be the front-runner to land the Cleveland job, which Haslam insists is still attractive despite nearly constant change.

They may face stiff competition for McDaniels, the former Broncos coach who is also expected to interview with Carolina and the New York Giants for their openings.

The Browns are also likely to meet with Vikings offensive coordinator Kevin Stefanski this week. He was a candidate last year before the Browns hired Freddie Kitchens.

The Browns met Saturday with San Francisco 49ers defensive coordinator Robert Saleh. They did not do any interviews Sunday.