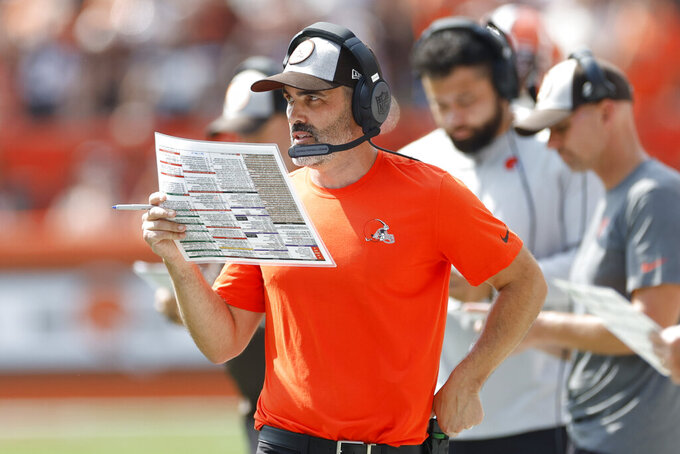 CLEVELAND (AP) — There are losses that can linger and leave marks, some that don't heal so quickly.

The Browns may have suffered one with an unimaginable giveaway Sunday.

Less than two minutes from a 2-0 start before a raucous home crowd in what's supposed to be the “soft” portion of their schedule while waiting for Deshaun Watson to return, the Browns imploded, crumbled, disintegrated, shattered.

Leading by 13 points, they gave up 14 in 60 seconds in a still-hard-to-fathom collapse and gift-wrapped a 31-30 victory for the New York Jets, who to their credit never stopped fighting until zeroes showed on the FirstEnergy Stadium scoreboard.

The Browns played 58 minutes and quit.

“It's a tough one,” said All-Pro left guard Joel Bitonio, who thought he had seen it all over nine seasons with Cleveland. “Every loss is tough. This one was especially tough. We thought we had it in the bag. We just did not do enough.”

The Browns' mistakes in the final two minutes were bewildering for a pro team. No wonder they heard boos leaving the field. They earned them.

Only in Cleveland has been a slogan of both civic pride and embarrassment for years. Well, consider that until Sunday, NFL teams had won 2,229 consecutive games when leading by 13 with two minutes left.

The Browns ended the streak. They also started it in 2001.

Whether it was running back Nick Chubb scoring on a 12-yard run instead of staying inbounds (he wasn't told not to) to run out the clock or cornerback Denzel Ward letting Jets receiver Corey Davis get behind him (he said it wasn't his assignment) for a lightning-quick TD or Cleveland failing to recover an onside kick, there was plenty of blame to be shared.

“A tough pill to swallow,” Stefanski said Monday. “The frustration is very, very real when you have a game that you feel like you can close out and we didn’t so that is the frustration and that is the disappointment.”

The Browns were lucky last week in Carolina. They let a late lead slip away with defensive miscommunication breakdowns that was supposed to be cleaned up. Only rookie Cade York's 58-yard field goal saved them.

But after Chubb scored his third TD Sunday with 1:55 left, and York missed the extra point, the Browns committed probably the worst of their late-game sins when Ward, perhaps thinking he was getting deep help from safety Grant Delpit, left Davis uncovered for a 66-yard touchdown.

"Just a blown coverage and we let a guy run free,” Ward said.

The stunning strike gave the Jets life and hope. The Browns handed it to them.

It would be easier to forgive that type of error if almost the same exact thing hadn't happened seven days earlier.

That's on Stefanski, defensive coordinator Joe Woods and secondary coach Jeff Howard, who don't have much time to fix things with the rival Pittsburgh Steelers coming to town Thursday.

He's also got to repair his team's fractured psyche.

It took a little longer to gain traction, but Cleveland's running game rolled up 184 yards on New York's solid defensive front. The Browns' 401 yards rushing through two games are the team's most since 1974 (416).

The Browns' secondary isn't on the same page or in the same playbook.

For the second straight week, confusion on assignments resulted in allowing a long touchdown pass at the worst possible time. Ward said he was covering the flat on the Davis play. Delpit wasn't as clear with his responsibility.

"I'm not going to play the blame game with my teammates, so I am just going to leave it as it was a communication error,” he said.

Cleveland's special teams were also culpable with York's missed PAT and the failure to recover the onside kick the worst offenses. Cleveland also got burned on a fake punt in the first half.

Quarterback Jacoby Brissett rebounded from a nervy opener, completing 22 of 27 passes for 229 yards and a TD. He also moved well, picking up 43 yards — 21 on a late scramble — and played the final few minutes on a sprained ankle. He's expected to play Thursday.

Stefanski's being second- and third-guessed for numerous decisions, starting with him not relaying to his offensive playmakers to stay inbounds late. The Jets were out of timeouts and the Browns could have taken three knees and left with a win before the cavalcade of mistakes.

Defensive end Jadeveon Clowney will miss Thursday's game with an injured right ankle. Clowney, who had a strip sack in the first half, went out in the third quarter with a non-contact injury. Stefanski did not provide any specifics of the injury. ... Brissett also hurt his ankle, but stayed in and is not on the injury report.

Urgency. As hard as it may be, the Browns need to put this debacle behind them.