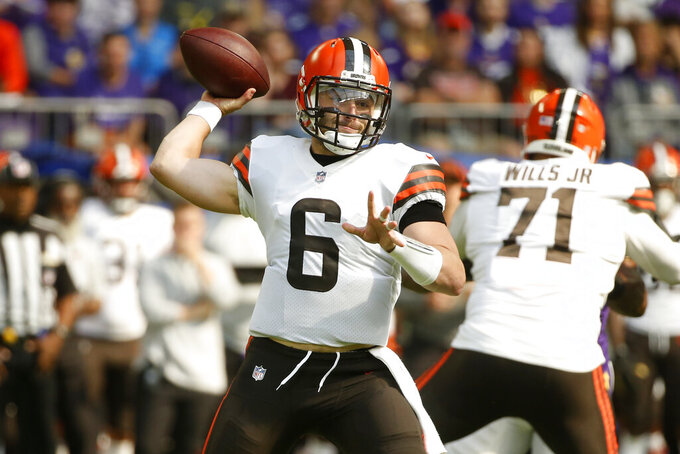 Cleveland Browns quarterback Baker Mayfield (6) throws a pass during the first half of an NFL football game against the Minnesota Vikings, Sunday, Oct. 3, 2021, in Minneapolis. (AP Photo/Bruce Kluckhohn)

BEREA, Ohio (AP) — Baker Mayfield's back in the saddle — and huddle.

The Browns' quarterback will start Sunday against the Pittsburgh Steelers, returning after missing one game because of an injured left shoulder that will require management for the rest of this season.

Mayfield, who has a torn labrum and fracture in his non-throwing shoulder, practiced for the third straight day on Friday. Coach Kevin Stefanski announced afterward that the 26-year-old will be back in the lineup.

“Medically, he’s ready to go,” Stefanski said. "Our doctors, our trainers, the second opinions felt very comfortable about that and Baker, he feels that he’s ready and he feels like he’s ready to help this team win.”

Mayfield didn't play last week — ending his streak of 53 consecutive starts — in a win over Denver. The rest improved Mayfield's range of motion and reduced inflammation, allowing him to strengthen his shoulder.

Mayfield has been fitted with a new stabilizing harness to help prevent his shoulder from popping out. Stefanski said he didn't see any issues with Mayfield's throwing mechanics this week.

“I would tell you functionally he’s 100 percent,” Stefanski said.

Earlier this week, Mayfield said he would keep playing as long as he wasn't hurting the Browns (4-3) or their chances to win.

Mayfield first injured his shoulder while trying to make a tackle last month against Houston. He then suffered a tuberosity fracture when he bent his arm back trying to protect his fall against Arizona on Oct. 17.

“He's mentally as tough as anyone I have been around,” offensive coordinator Alex Van Pelt said Thursday. ”He takes everything seriously. I don't know if I have seen him jovial, but that is Baker, and I love his attitude.”

Veteran backup Case Keenum started for Mayfield last week and led the Browns to a 17-14 win.

The Browns also will have star running back Nick Chubb (calf) and starting right tackle Jack Conklin (knee) back this week. Those returns will help Mayfield significantly, with Conklin lining up against Steelers linebacker T.J. Watt, who has seven sacks.

Mayfield also will have two of his top targets together for the first time this season as wide receivers Jarvis Landry and Odell Beckham are expected to play. Beckham has been dealing with a shoulder sprain, but has practiced.

Cleveland's defense won't have cornerback Denzel Ward, who suffered a hamstring injury against the Broncos.

The Browns could be down other defenders as well, with ends Jadeveon Clowney (ankle, groin, knee) and Takk McKinley (groin), tackle Malik Jackson (ankle) and cornerback A.J. Green (groin) listed as questionable.

The Browns have been dealing with injuries up and down their roster and their coaching staff also took a hit.

“We’re going to be without him for a little bit here, which is tough because he’s such a big part of what we do, who we are,” Stefanski said. "So, obviously, my well wishes are with Stump. I’ve spoken to him and he wants to be there with the team, but he’s got to take care of himself right now and that’s what he’s going to do.”

Mitchell played for nine seasons in the NFL. He has helped Cleveland develop the league's top running attack led by Chubb, Kareem Hunt and third-stringer D’Ernest Johnson, who rushed for 146 yards last week in his first start.

Hunt is on injured reserve with a calf issue and will miss his second game this week.