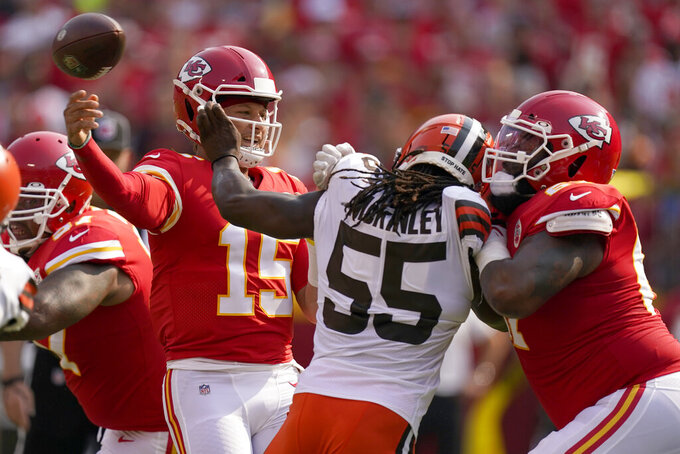 CLEVELAND (AP) — Takk McKinley was touched as he looked around the room and saw Myles Garrett, Jadeveon Clowney and Cleveland's other defensive linemen applauding his return to the Browns after a three-week absence.

“I had to hold my tears back,” he said, recalling his return in August. “It was an awesome moment.”

McKinley spoke Thursday for the first time since coming back from an excused leave during training camp to address personal problems that he's keeping private.

The 25-year-old former first-round draft pick, whose promising NFL career has been hindered by injuries and selfish behavior, said he was moved by the strong support he received from the Browns while dealing with his issues.

While he was away, McKinley remained in close contact with general manager Andrew Berry and Browns coach Kevin Stefanski. His teammates constantly reached out to check and make sure he was OK.

McKinley said the outpouring was beyond anything he expected.

“Just the support means everything,” he said. "The NFL really is not like that, so to have the support from the owner, the GM, the head coach, my teammates, it was just great. Glad to be a Brown and continue to focus and get ready for Minnesota.”

The Browns (2-1) are on the road this week to face the Vikings (1-2). It's a homecoming for Stefanski, who spent 14 seasons in Minnesota and who in two years has established a family first culture in Cleveland.

McKinley wasn't worried about not being welcomed back month after leaving during the grind of camp. He knew his teammates had his back. But the warm reception he received upon entering the defensive line room was totally unexpected.

“That was a cool moment because it shows it’s a brotherhood,” he said. “I was gone for a while dealing with stuff and as soon as I walked in everybody started clapping, they were excited to have me back, so that made me feel real good.”

“He’s one of our brothers, and the D-line room — they’re very close,” he said. “He may have been going through some struggles and those guys are always there to support him. Right now, he’s doing a good job and he’s getting comfortable and he’s playing well for us.”

McKinley may have finally found a landing spot after a whirlwind year.

The No. 30 overall pick by Atlanta in 2017, McKinley had 13 sacks in his first two seasons before his production dipped dramatically. He had just 4 1-2 sacks over two seasons dealing with an assortment of injuries.

After the Falcons waived him last year, McKinley was claimed by Cincinnati and then waived again. He was picked up by San Francisco and waived a third time after failing physicals at both spots due to a lingering groin injury.

He wound up with Las Vegas and spent the rest of the season on injured reserve.

At each of those junctures, the Browns unsuccessfully tried to claim him and Berry even tried trading for the 260-pounder, whose quickness off the snap has always made him so appealing. In March, McKinley signed a one-year, $4.25 million contract with Cleveland.

“Ultimately,” he said, “I ended up where I was supposed to be.”

McKinley noted the past year has been both humbling and enlightening.

“Just the opportunity to be in the NFL, my last four years I may have taken it for granted,” he said. "This league is not promised, so being able to go out there on this practice field and meetings and getting 1% better every day and being able to compete is the best thing ever.

His path to Cleveland has been anything but straight, but McKinley has learned from curves and hard turns along the way.

“Nothing ever comes easy for me, and I’ll be OK with that," he said. "Life is a journey. My (2-year-old) son’s name is Journey because my life was a journey. Even just the road to just being back with the Browns, it’s going to have its ups and downs, but that’s OK.

NOTES: WR Odell Beckham Jr. said he didn't miss any practice time Wednesday despite the team saying he was “limited” with a shoulder injury. Beckham had said his shoulder popped out early in his season debut last week. ... C JC Tretter (knee) and LT Jedrick Wills (ankle) remained idle but are expected to play Sunday.