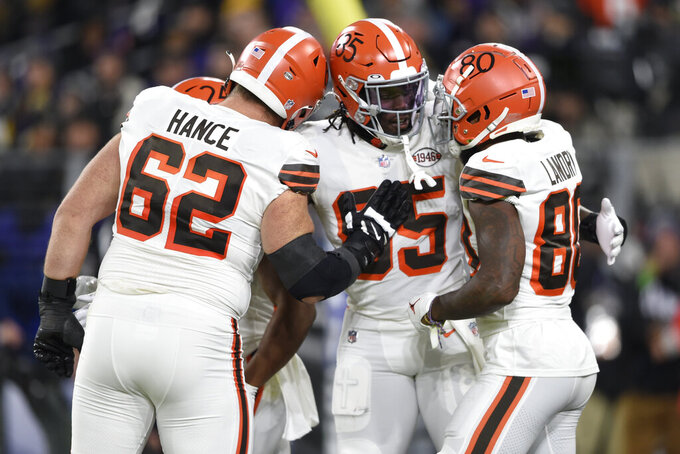 Njoku leads Cleveland with 407 yards receiving and he scored the Browns' only touchdown in a 16-10 loss to the Ravens on Nov. 28.

The loss of Njoku would be a major blow to the Browns (6-6), who can’t afford another loss if they hope to make the playoffs. Plus, tight end Harrison Bryant is expected to miss Sunday’s game with a high ankle sprain.

Njoku posted on Twitter that he's not having any symptoms, saying “Smh I don’t feel a thing.”

Njoku hasn’t been ruled out yet, but he’ll have to be symptom free and provide two negative tests in a 24-hour period to be eligible.

Browns coach Kevin Stefanski favors offensive formations using multiple tight ends and may have to adjust his scheme against the Ravens with only Austin Hooper currently available among his usual players.

“We just feel like we have three good tight ends,” Stefanski said Monday, when asked about his preference to use three-tight end sets. “We like those guys. Now with Harrison out, we will have to adjust.

Without Njoku, quarterback Baker Mayfield would be missing one of his best deep threats. Njoku, a first-round pick in 2017, has played well this season with 27 catches and three touchdowns. He had three grabs for 35 yards in the first matchup with Baltimore.

The Browns were off Tuesday but signed Mike Forristall, an undrafted rookie tight end from Alabama, to the active roster. The 6-foot-5, 245-pounder hasn’t played in an NFL game.

Stefanski has other options in tight end Ross Travis, who was signed to the practice squad and fullback Johnny Stanton IV, a solid all-around athlete who has played some tight end.

Long snapper Charley Hughlett was activated from the COVID-19 list after testing positive during the bye week.