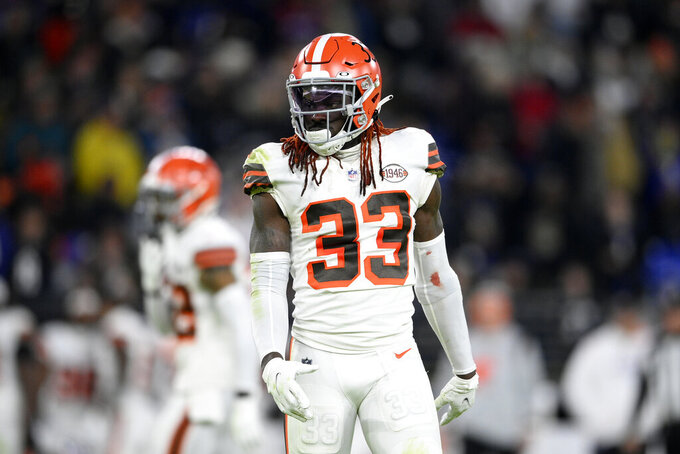 CLEVELAND (AP) — Safety Ronnie Harrison is coming back to the Cleveland Browns for at least another season, his agent Drew Rosenhaus said Friday.

The team and the free agent agreed to terms on a one-year contract, giving the Browns some depth at a position that has been challenging to get settled because of injuries the past two seasons.

Harrison has shown flashes of being a productive player, but the 24-year-old (he turns 25 on April 18) has also been prone to mistakes. He made 11 starts and played in 12 games last season, but was also inactive for three games.

Harrison was ejected from the Browns' season opener in Kansas City last season after shoving a Chiefs assistant coach. He was also benched for the start of Cleveland's win over Detroit for unknown disciplinary reasons.

The Browns acquired the 6-foot-3, 215-pound Harrison in a trade with Jacksonville before the 2020 season. The Jaguars selected the former Alabama standout in the third round of the 2018 draft.

Harrison has played in 23 games for the Browns. He has 96 tackles and two interceptions, returning one for a touchdown in 2020 against Indianapolis.

Cleveland's secondary has been plagued by injuries the past two seasons. Safety Grant Delpit returned last season after missing his rookie year in 2020 with a ruptured Achilles tendon. Harrison was picked up after Delpit got hurt in training camp.