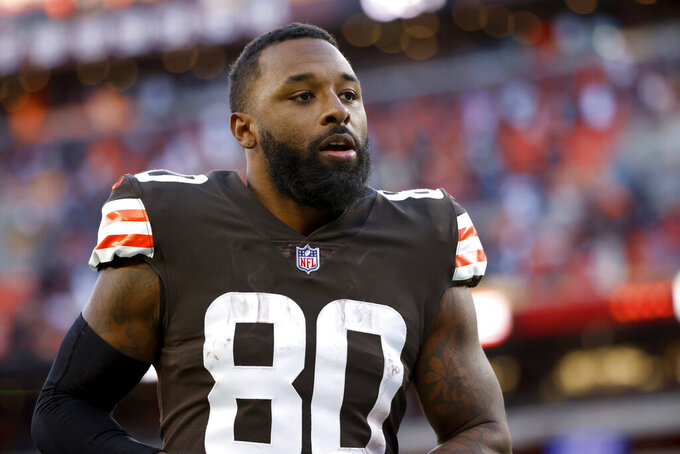 FILE - Cleveland Browns wide receiver Jarvis Landry (80) jogs off the field after an NFL football game against the Baltimore Ravens, Sunday, Dec. 12, 2021, in Cleveland. The Cleveland Browns are releasing five-time Pro Bowl wide receiver Jarvis Landry, who helped the team’s turnaround but is too expensive to keep, a person familiar with the move told the Associated Press. Landry will be let go Monday, March 14, 2022, as the NFL's free agency tampering period opens, said the person who spoke on condition of anonymity because the team has not yet announced the transaction. (AP Photo/Kirk Irwin, File)

Cleveland released the five-time Pro Bowl wide receiver Monday in a tough but necessary cost-cutting move after the invaluable Landry became too expensive to keep.

One of the league's steadiest pass catchers, the 29-year-old Landry was instrumental in the Browns' turnaround after the team went just 1-31 in the two seasons before he arrived via trade from the Miami Dolphins in 2018.

Landry provided leadership and was one team's top offensive players as the Browns ended a nearly 20-year playoff drought in 2020.

“The trade for Jarvis Landry in 2018 was a key moment for our organization,” Browns general manager Andrew Berry said in a release. "Jarvis’ on-field production and fiery competitiveness speaks for itself, but his leadership and team-oriented attitude impacted our culture in a way that will last in time even beyond his release.

"These decisions are always difficult, but we wish Jarvis well and we look forward to the day when he returns as a storied Browns alumnus.”

During four seasons with the Browns, Landry had 288 receptions for 3,560 yards and 15 touchdowns. He added four rushing TDs and threw for a score. Landry is the only player in league history to record at least 70 receptions in each of his first seven seasons.

The Browns were hoping to restructure Landry’s contract, but couldn't strike a compromise. The team will save nearly $15 million in cash and salary-cap space, allowing the Browns to address other needs.

Landry’s departure comes two days after the Browns agreed to acquire wide receiver Amari Cooper in a trade with Dallas. Cooper will be Cleveland’s No. 1 wide receiver, a spot that opened when Odell Beckham Jr. forced his way out last season.

Shortly after getting Cooper from the Cowboys for a fifth- and sixth-round pick, the Browns gave Landry permission to seek a trade.

Now, as a free agent, he’ll have his choice where to go and there will likely be numerous teams interested in signing a proven, dependable veteran with 688 career catches.

The Browns also added some defensive help on the first day of NFL legal tampering by agreeing to a one-year deal with 26-year-old tackle Taven Bryan, a person familiar with the negotiations told the AP. The person spoke condition of anonymity because signings can't be announced until Wednesday.

Bryan will join the inside rotation with Jordan Elliott and Tommy Togiai. Cleveland needed depth up front after Malik McDowell was arrested during the offseason and not tendered by the Browns.

Several of Landry's Cleveland teammates posted messages on social media thanking him for his contributions.

Tight end David Njoku expressed his gratitude on Instagram, writing: “Thank for your creating the standard & culture that was needed to be established here in Cleveland. Thank you for showing what true leadership is.”

As the Browns fell way short of expectations in 2021, Landry had his worst season, with career lows in receptions (53), yards (570) and touchdowns (two) while being slowed by a knee injury. He had caught at least 72 passes in each of his previous seven seasons.

Landry suffered the knee injury on Sept. 19 against Houston. The 29-year-old missed five games — he had missed just one in his previous seven seasons combined — and wasn’t the same when he came back.

Also, Landry was upset by his good friend Beckham's release in November and didn't speak to the media for the remainder of the season.