Browns still hoping to have star RB Chubb against Patriots 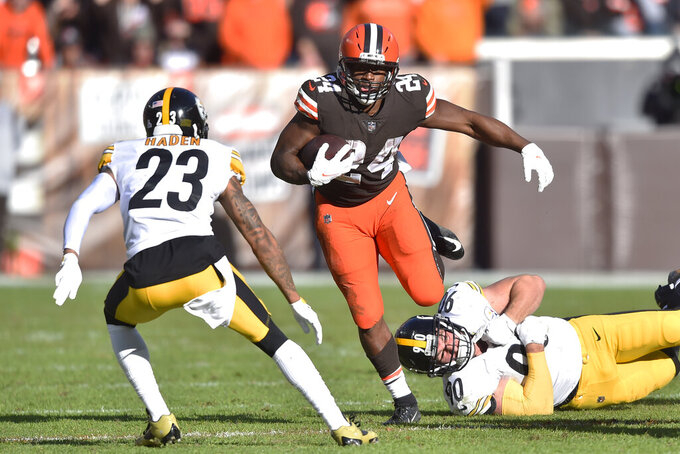 Cleveland Browns running back Nick Chubb (24) breaks away from a tackle by Pittsburgh Steelers outside linebacker T.J. Watt (90) during the second half of an NFL football game, Sunday, Oct. 31, 2021, in Cleveland. (AP Photo/David Richard)

CLEVELAND (AP) — The Browns remain hopeful star running back Nick Chubb will play this week at New England despite testing positive for COVID-19.

Chubb, who rushed for 137 yards and two touchdowns last week at Cincinnati, was placed on the reserve/COVID-19 list on Tuesday along with rookie running back/punt returner Demetric Felton.

Chubb must be symptom free and twice test negative 24 hours apart to be eligible to play Sunday against the Patriots. The Browns (5-4) would also need to activate him by 4 p.m. Saturday for Chubb to be available.

For now, the Browns are holding out hope Chubb will play.

“There’s a chance,” offensive coordinator Alex Van Pelt said Thursday. "I don’t how large that chance is or when that chance ends, but we’ll take it as long as we need to, as long as we possibly can, and we’ll see what happens there when we get to game time.”

After having five players test positive with coronavirus this week, the Browns had no new cases Thursday.

If Chubb can't play — and with Kareem Hunt on injured reserve — third-stringer D'Ernest Johnson will make his second career start. He rushed for a career-high 146 yards while filling in for an injured Chubb on Oct. 21 in a win over Denver.

“It’s definitely a good feeling to know there’s a guy there that’s been productive really every time he’s touched the ball for us," Van Pelt said. "I feel very confident he’ll come out and perform for us like he has in the past if he needs to.”

Van Pelt added the Browns would not have to dramatically alter the game plan with Johnson as the primary back.

"We have great confidence D’Ernest can carry the load,” he said.

Van Pelt said quarterback Baker Mayfield's unspecified foot injury may slow him in practice this week, but shouldn't keep him out of the game. Mayfield said Wednesday he's had a “nagging” foot issue.

“I know he’s a tough guy,” said Van Pelt, noting Mayfield is playing through a labrum team and fracture in his left shoulder. "He’s already played through a lot worse than this, and I think he’ll be fine. Just got to find a way to get him through practice this week.”

While the Browns await test results on Chubb, the defense could get a lift this week with rookie linebacker Jeremiah Owusu-Koramoah expected to return after missing three games with a high ankle sprain.

“Speed, coverage ability, tackling, blitzing, everything," he said. "He’s a very talented player. There may be a little bit of rust. We’ll see where he’s at as we progress through the week, but I think he just adds another dimension to our defense for sure.”