Browns still not settled at right guard with opener looming 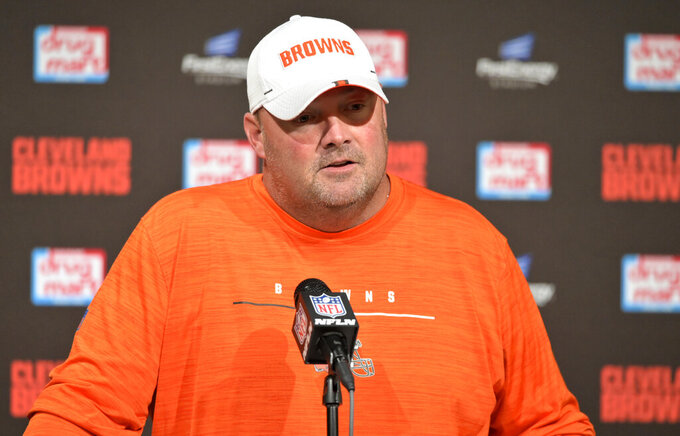 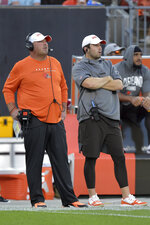 CLEVELAND (AP) — Just over a week before their opener, the Browns still haven't settled on a starting right guard.

The Browns traded for Teller on Thursday, sending a pair of 2020 draft picks — a fifth and sixth-rounder — to the Buffalo Bills. The move by general manager John Dorsey not only underscored the team's need for depth up front, but also that the Browns hasn't settled on a position they've spent the summer trying to fill.

Last week, Kitchens penciled in Eric Kush as the starter, but that was before the arrival of Teller, who started seven games as a rookie last season. Teller passed his physical Friday and is ready to go.

Kitchens is eager to see what Teller brings, and hinted he could push past Kush next week.

"Eric is our right guard as we speak, but we haven't even had Wyatt on the field yet," Kitchens said during a teleconference. "So I would say, I mean, my first inkling would be to say yes, (Kush will start in Week 1), but we haven't seen him (Teller) on the field yet. We've still got four practices to get through, and we'll see where it all goes. Even though training camp has ended, there's always competition.

"There's always going to be competition while I'm here, and I think you get the best out of everybody when you run it that way."

To this point, Kitchens has only seen Teller on film, but has liked the footage.

"Anytime he goes in the game, he brings a toughness to it," Kitchens said of Teller, drafted in the fifth round in 2018 by the Bills. "He plays with good technique most of the time and I think he gives us some depth at the position in the short term."

Teller went from being a potential starter to backup when the Bills overhauled their line in the offseason.

Cleveland has been on a quest to fill the starting guard position since trading solid veteran Kevin Zeitler to the New York Giants in the mega deal that landed it superstar receiver Odell Beckham Jr.

Since the start of training camp, the Browns have rotated 2018 second-round pick Austin Corbett, Kyle Kalis and Kush with the starting offense, but none of them has seized control of the job. Corbett has been dropped to second-team center and Kalis missed time with a concussion.

Kush, who signed with Cleveland as a free agent in March after playing 18 games for Chicago last season, seemed to be the choice before Dorsey made another deal.

And based on Dorsey's free-wheeling track record, the Browns' line might not be done changing.

NOTES: Kitchens said suspended RB Kareem Hunt will need four to six weeks to recover from sports hernia surgery. Per NFL rules, Hunt will not be permitted to be in the team's building during his eight-game suspension. The team's request for an exception was denied by the league, and while the Browns would prefer Hunt to be around, Kitchens said they'll make the best of it. "Of course, we would like him here, we feel like we offer the best support for him," he said. "He's comfortable with being here, he trusts us here, things like that. We'll develop a plan for him." ... Rookie OL Drew Forbes sustained "a minor knee issue" in Thursday's win over Detroit, Kitchens said.