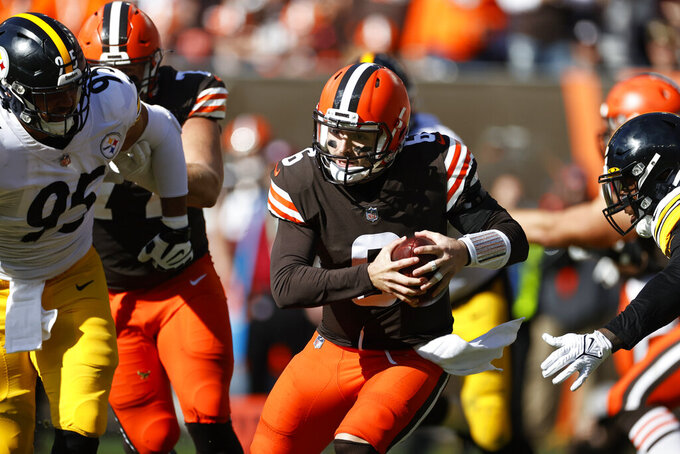 Cleveland Browns quarterback Baker Mayfield (6) scrambles during the first half of an NFL football game against the Pittsburgh Steelers, Sunday, Oct. 31, 2021, in Cleveland. (AP Photo/Ron Schwane)

CLEVELAND (AP) — Baker Mayfield's fractured left shoulder is only one of many things currently broken for the Browns.

They're in pieces at the moment.

Hobbled by injuries, hindered by a lack of offensive explosiveness and unable to put away games with the lead in the fourth quarter, the Browns look like a middle-of-the-standings team sliding in the wrong direction.

Their 4-4 record reflects their status: average.

All the playoff and Super Bowl chatter around Cleveland has been replaced by serious concern, pointed questions and major doubts.

A day after a disturbing 15-10 loss to the Pittsburgh Steelers dropped the Browns into last place in the AFC North, coach Kevin Stefanski leaned on his tried-and-true excuse of “I've got to be better” to deflect attention from his team's many issues.

The most troubling trend is a Cleveland offense that has produced just 41 points in the past three games.

The Browns have playmakers. They're not making plays.

Stefanski, whose play-calling has come under more intense scrutiny, was asked Monday what concerns him most about his sputtering offense and a passing attack that isn't making passing grades.

“We have to make the most of our opportunities,” he said. “I’ve seen it from this group. I’ve seen some really good moments from this group, I know what we’re capable of. We haven’t done it consistently enough."

Injuries are a factor, not an excuse. The Browns just aren't very good right now, and it doesn't help that Mayfield's damaged shoulder — and injuries to both starting tackles — may be playing a role in Stefanski's hesitation to dial up plays to try and push the ball downfield.

Cleveland has trusted its potent running game to carry it, but when the Steelers shut down Nick Chubb (16 carries, 61 yards) on Sunday, the Browns were unable to counter as the passing attack was grounded as well.

The Steelers applied enough consistent pressure to make Mayfield move and rush throws, and it didn't help that reliable receiver Jarvis Landry had a critical fumble and two drops in the final six minutes.

There's plenty to work on, and still plenty of season to fix things.

As far as center JC Tretter is concerned, the Browns' problems can be remedied easily.

"We know what we need to do better.”

Led by all-world end Myles Garrett, who leads the NFL with 10 1/2 sacks, the defense is doing its part — mostly. The Browns held the Steelers to 15 points, which should be good enough for a win.

However, the unit isn't creating enough turnovers (just five this season) to ease some of the pressure on Cleveland's offense.

“It's eventually going to come,” rookie cornerback Greg Newsome II said. "You just have to stay the course.”

Until the Browns start closing games, there will continue to be conjecture about Mayfield's long-term future.

Some of the criticism toward the QB isn't fair. He was plagued by Landry's fumble and two drops and a false start on Cleveland's last two drives Sunday. But he hasn't been able to mount a comeback to win a game or do enough in the fourth quarter to put teams away.

The Browns took leads into the fourth against Kansas City, the Chargers and Steelers — and lost all three games.

“We have to finish. We have to close games,” Stefanski said.

Newsome has been everything the Browns had hoped when they selected him in first round.

He's excellent in coverage and showed his closing speed by running down Steelers receiver Diontae Johnson, who appeared on his way to an easy first down in the fourth quarter when Newsome tackled him to force a punt.

“We know some people are counting us out,” he said. “We don’t care. We know the people we got in this building the players we have on this team.”

The Odell Beckham Jr. mystery deepens. The wide receiver was targeted just twice Sunday — he had a 6-yard reception and short-armed a high incompletion over the middle in the final three minutes.

His lack of production — 17 catches, 232 yards, 0 TDs in six games — and seeming exclusion in the game plan is baffling.

Starting RT Jack Conklin will miss “multiple weeks” with a dislocated left elbow suffered Sunday. The loss of the 2020 All-Pro could push the Browns into making a trade for either a starter or to add depth. ... Safety John Johnson III is “day to day” with a neck stinger. ... Stefanski hopes CB Denzel Ward (hamstring) will be back this week to face the Bengals.

$15 million — The amount of salary-cap space the Browns could clear by trading Beckham, who is not guaranteed any money in the final two years of his contract.

A critical trip to Cincinnati on Sunday for a must-win game against Joe Burrow and the reborn Bengals, who lost to the New York Jets on Sunday and will also be looking to bounce back.