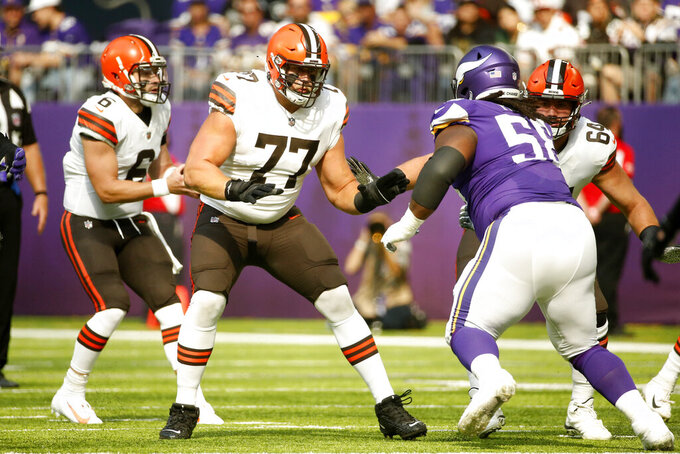 FILE - Cleveland Browns offensive guard Wyatt Teller (77) looks to make a block during the first half of an NFL football game against the Minnesota Vikings, Sunday, Oct. 3, 2021, in Minneapolis. Cleveland Browns right guard Wyatt Teller has agreed to a four-year contract extension with the team through the 2025 season. He’s expected to sign the deal on Tuesday, Nov. 9. (AP Photo/Bruce Kluckhohn, File)

The massive, mauling right guard signed a four-year, $56.8 million contract extension with Cleveland on Tuesday that could keep him with the team through the 2025 season.

Discarded after his rookie season by Buffalo for two late-round draft picks, Teller has developed into one of the NFL's best interior linemen during the three seasons since coming over in a 2019 trade.

"I was disappointed at first," Teller said of being dealt by the Bills. "But then you realize you’re wanted by another team and wanted by another city. I was given another opportunity and luckily I made the most of it.”

The 6-foot-4, 315-pounder was scheduled to become a free agent after this season, and would have likely been one of the most coveted players on the market.

The Browns decided instead to lock up Teller, who has become something of a football folk hero in Cleveland.

A video of him hoisting a dead, 10-foot alligator on his shoulders during a hunting trip went viral last year and Teller's blocks have become weekly highlights on social media platforms for Browns fans.

“I’m thankful that the fans of Cleveland, offensive linemen are loved," Teller said on a Zoom call shortly after signing his contract. "They're glorified here and it’s a special city.”

Teller has consistently rated among the league’s top blockers over the past two seasons. In Sunday’s 41-16 win at Cincinnati, he delivered a key one — leaving his feet to deliver the blow — that s prung Nick Chubb on a 70-yard touchdown run.

“I think I got more lucky on that block,” Teller said with a laugh, acknowledging he was worried about being called for a penalty. "Nick saw that hole and he took it. I just made it a little bit bigger.”

Teller was drafted by the Bills in the fifth round in 2018 out of Virginia Tech. He played eight games as a rookie before being traded. In Cleveland, he's blossomed under the tutelage of Browns offensive line coach Bill Callahan — a pairing Teller said was “by the grace of God.”

“I say out of the grace of God, he’s also one of the craziest men I’ve ever met in my entire life,” Teller said of the well-respected Callahan. “He gets us working out there, but I’m extremely thankful for his guidance and coaching.”

While signing Teller has always been part of Cleveland's plan, there was a concern the Browns might not be able to do it because of salary-cap space with other potential deals in the near future.

But the team values Teller's contributions on a line that has helped the Browns have one of the league's best rushing attacks.

“To see Wyatt turn himself into one of the top guards in the game has been an enormous pleasure,” said Browns general manager Andrew Berry. "Congratulations to Wyatt and his family — but please, no more alligators!”