Browns vow to get coach hire 'right,' meet with McCarthy 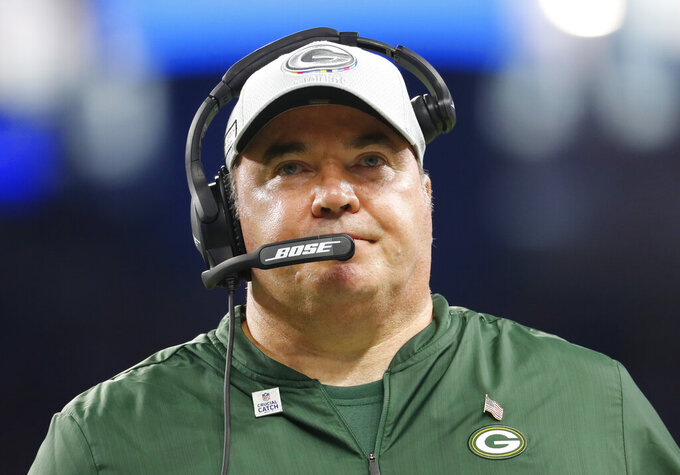 FILE - In this Oct. 7, 2018, file photo, Green Bay Packers coach Mike McCarthy watches the team's NFL football game against the Detroit Lions in Detroit. The Cleveland Browns didn't even talk to Mike McCarthy on their last coaching search. He was at the top of their list this time around. The former Green Bay coach is meeting Thursday, Jan. 2, 2020, with Browns owners Dee and Jimmy Haslam as Cleveland begins its latest quest to find the right coach after so many failed attempts. (AP Photo/Paul Sancya, File)

BEREA, Ohio (AP) — Browns owner Jimmy Haslam excused himself from a daylong interview with former Packers coach Mike McCarthy to once again explain why his franchise is in disarray.

It's a nearly annual event in Cleveland — fire a coach, find a new one, fire him.

On Thursday, Haslam made a familiar vow.

“We are very determined to get it right this time,” Haslam said, echoing a statement he's made before.

The Browns kicked off their latest quest to find a coach — and also a general manager — by interviewing McCarthy, who led the Packers to a Super Bowl title in 2010 and whose impressive resume may give him an advantage over any other candidates Cleveland will interview.

“Obviously he’s got great experience, he’s won 62 percent of his games and that speaks for himself,” Haslam said during a 20-minute news conference. “So we’ve really enjoyed our time with him.”

McCarthy never spoke with the Browns last year before they surprisingly hired Freddie Kitchens, who proved to be ill-prepared and was dismissed after a drama-filled 6-10 season. But the 56-year-old McCarthy was first on a long list this time around as Haslam and his wife, Dee, attempt to finally complete what to this point has been a futile quest.

On Thursday night, the Browns will meet with Ravens offensive coordinator Greg Roman, a person familiar with team's plans told the Associated Press. Cleveland's search committee led by Jimmy Haslam will meet with Roman in Baltimore, said the person who spoke on condition of anonymity because of the sensitivity of the talks.

Per NFL rules, the Browns can speak with Roman this week because the Ravens have a first-round playoff bye.

As McCarthy waited upstairs in Cleveland's facility, Haslam laid out the team's plans to find its next coach and new GM after John Dorsey's shocking ouster Tuesday. Haslam said the team will first hire a coach, who will have input into hiring the next GM.

“If you look at the successful organizations that are consistently in the playoffs, there is alignment within the organization, and they have the right people in the right place, coach and GM,” Haslam said. “That's what we're focused on tremendously, and that alignment is something that is really, really important.”

Haslam said he and his son-in-law, JW Johnson, met with 25 to 30 core players on Monday to get their thoughts on what's needed.

McCarthy would seem to fit that profile. He went to the playoffs nine times in 13 years with the Packers before being fired in 2018. He's a respected, proven winner with an offensive mindset and has experience handling quarterbacks after working with Aaron Rodgers.

He went 125-77-2 in Green Bay, but McCarthy was often criticized for not winning more that one Super Bowl with Rodgers and for being too basic on offense. He spent the past year out of football, immersing himself in studying concepts, new trends and embracing analytics. He's already interviewed with Carolina about its job and will meet with the New York Giants.

McCarthy does have connections in Cleveland as he worked in Green Bay with Browns assistant GM Eliot Wolf. Haslam said Wolf will remain in that role and there is not a chance of him being promoted.

“We will go outside of the organization to find our next GM,” Haslam said.

Haslam said NFL head coaching experience is not a prerequisite. He also sidestepped a question about the Browns' interest in former Ohio State coach Urban Meyer, saying the team was only focused on coaches with pro ties “right now.”

Strategy officer Paul DePodesa is leading the search process this time. Haslam said the final decision on hiring a coach will be made by him and his wife with collaboration from other members of the search committee: DePodesta, Johnson and vice president Chris Cooper.

And while the Browns have had plenty of practice in looking for coaches and executives, the results have been poor.

“Let’s be honest, there is no guarantee,” Haslam said. “I do think we have learned a tremendous amount the hard way, a very painful way, and I think we have a clearer vision and expectation of exactly what we are looking for in both positions.”

Haslam didn't run from his failures.

"We realize that we’ve had a tremendous amount of change since we bought the team. We accept responsibility,” he said. “At the same time, we’re more determined than ever to get it right for the Browns, the players and for the great fans of the Cleveland Browns, which we have the best fans, I believe, in the world.”