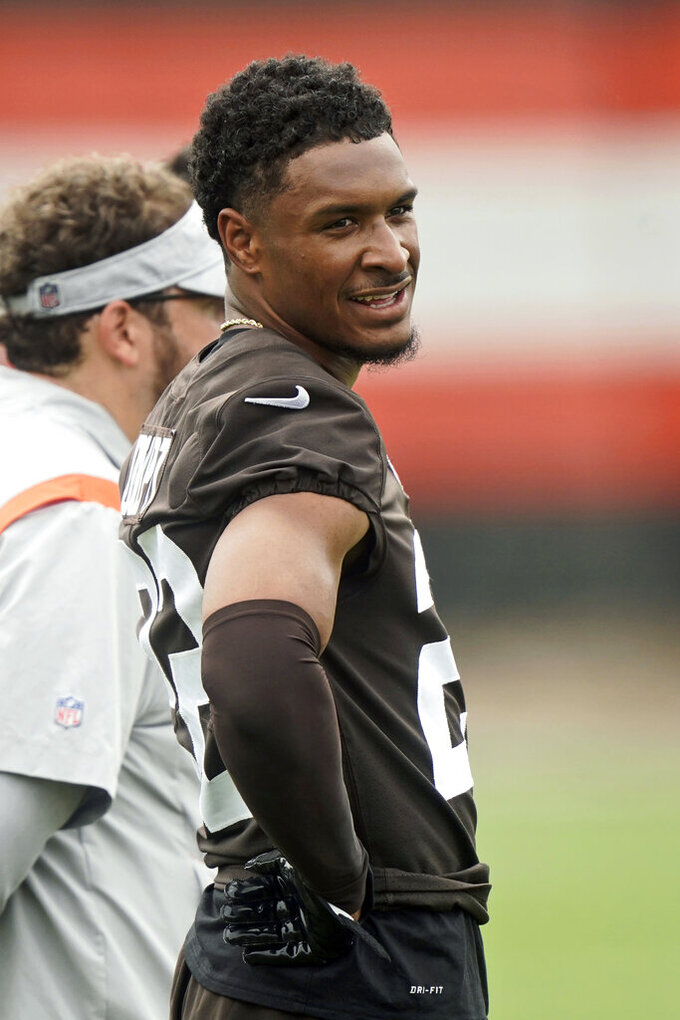 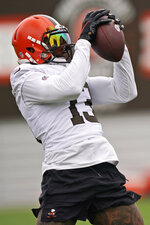 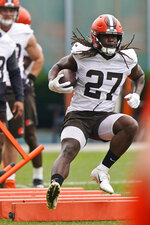 BEREA, Ohio (AP) — With the New York Giants visiting for a few days, Browns coach Kevin Stefanski is counting on his players being on their best behavior.

“They are our guests,” he said.

It remains to be seen how they'll be welcomed.

Before they play an exhibition at FirstEnergy Stadium on Sunday, the Browns and Giants will practice together for two straight days at Cleveland's suburban training facility.

And if past joint practices between NFL teams is any indication, there could be more going on than blocking and tackling.

“There are times when they can get a little testy and get a little physical,” said Browns linebacker Anthony Walker Jr.

Two years ago, when he was with Indianapolis, the Colts hosted the Browns for two practices in Westfield, Indiana, that grew more intense over two days and resulted in numerous brawls between players — some of them ugly.

Freddie Kitchens, Cleveland's coach at the time and now a senior offensive assistant with the Giants, wanted to set a tone for the 2019 season and the Browns came out swinging.

Walker and the Colts swung back.

“Yeah, we didn’t get pushed around,” said Walker, who signed as a free agent with Cleveland in March. “We’re not going to let anybody do that but, you know obviously on the Browns, I come here with the same mentality.”

Things got so heated between the Colts and Browns that players on one field spilled over onto the other to exchange blows.

Stefanski said he's already spoken to some of his players about keeping things cool during the two practices with the Giants, who earlier this summer fought amongst themselves in training camp with quarterback Daniel Jones winding up at the bottom of the pile in one scrum.

Stefanski figured he'd be proactive to avoid any fisticuffs. He wants competition, not counter-punches.

“I will talk with the entire team about it as we get closer to it,” Stefanski said. “Really, it is not any different than when we are out here today and how we have been out here. We get some really good work in, and we take care of each other. It is because we respect each other. It is no different when the Giants come in here.

“We want to make sure that we work, we work hard and we compete against each other, but we are always going to be taking care of each other and making sure that it is a safe, controlled environment.”

Stefanski outlined some of the itinerary for the scheduled two-hour practices, which he started planning with Giants coach Joe Judge months ago. The sessions will include individual competitions between players as well as red zone and two-minute drills.

Stefanski and Judge go way back. They were briefly classmates and teammates in Philadelphia and Stefanski played high school ball with Judge's brother, Jim.

That connection will allow both teams to get the work they need, and should help keep things under control.

“I know what Joe’s about and what he believes in, so there’s that relationship there where we know our two teams,” Stefanski said. "I think you can get good, productive work when you have that.”

The Browns have shown great discipline during camp as there hasn't been a single incident between teammates during workouts in some oppressive heat.

But the on-field temperature will certainly rise once the New Yorkers show up.

Walker smiled and chuckled when first reminded of the Browns’ over-aggressiveness back in 2019. The Colts were ready for it, and he’ll make sure the Browns take care of things should the need arise.

“Obviously, this is our home field and we gotta protect it no matter what,” he said. “Like I said, we’re going to keep it at football and go out and compete and have fun. It’s a game at the end of the day, and we’ll leave it at that.”

NOTES: On just his second day back at practice, safety Grant Delpit sustained a hamstring injury. The second-round pick from LSU missed his entire rookie season in 2020 with a ruptured Achilles tendon and he missed two weeks in camp with a hamstring issue. Before practice, he insisted he doesn't have any catching up to do despite missing all that time. “I'm working two times harder than the next person,” he said. "That’s the mentality you gotta have, so I’m not behind at all.” Delpit and S Ronnie Harrison Jr. (hamstring) both returned to practice Tuesday. ... DE Jadeveon Clowney was not at practice. He had been working on the side with an unspecified injury.