Buccaneers back atop NFC South, still searching for answers 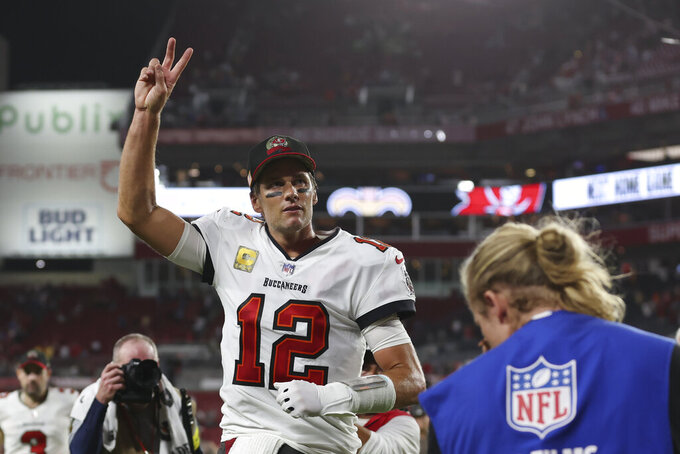 TAMPA, Fla. (AP) — The Tampa Bay Buccaneers are back in first place, though not necessarily back on track.

Tom Brady led a dramatic comeback victory over the defending Super Bowl champion Los Angeles Rams, ending a three-game losing streak and enabling the Bucs (4-5) to pull even with Atlanta atop the NFC South midway through the season.

The team’s 16-13 triumph, coupled with a win over the Falcons last month, gives Tampa Bay a tiebreaker advantage in the division race.

Still, it’s much too soon to conclude they’ve resolved the issues that have undermined them, especially on offense.

Beating the Rams to avoid a four-game skid, nevertheless, is a step in the right direction and figures to make for a much more pleasant flight across the Atlantic Ocean this week to face the Seattle Seahawks (6-3) in Munich, Germany.

Next week’s bye will afford coach Todd Bowles and his staff an opportunity to assess where the team stands and implement any changes deemed necessary.

“We have just not played the way we’re capable. Just some things have kind of not really fallen our way at all,” Brady said. “Hopefully we can get a win (Sunday), get to 5-5 and then the whole season is ahead of us.”

Red zone and third down efficiency have been problematic. So have untimely penalties and other mistakes contributing to the team’s scoring woes, and uncharacteristic breakdowns that have fed inconsistency on defense.

Through nine games, the Bucs are only averaging 18 points per game, which ranks near the bottom of the NFL after being one of the league’s highest-scoring teams the past two seasons. Brady didn’t get the offense into the end zone until just 9 seconds remained against the Rams.

Defensively, they’ve limited opponents to 21 or fewer points in seven of nine games. but not been nearly as effective lately in getting off the field on third down and in other key situations that have influenced the outcome of games.

The unit also hasn’t been as dependable as usual against the run, yielding a little more than 125 yards per game on the ground.

Bowles is confident the shortcomings are fixable. He was clearly encouraged after the defense allowed a season-low 206 yards against the Rams, including just 68 rushing on 24 attempts.

“It was a hard-fought game. It was complementary football. It was a team win,” Bowles said. “It’s a lot easier to fly overseas after you win a game than when you lose a game. We’ve just got to start putting them together.”

Despite losing five of seven following a 2-0 start, Brady is second in the NFL with 2,547 yards passing. The team's red zone struggles are reflected in the fact the 45-year-old quarterback has only only thrown for 10 touchdowns. He's thrown one interception, none since Week 1.

An inability to run the ball has made the Bucs rely on Brady’s arm more than Bowles would prefer. The team is averaging just 3 yards per carry. There are 15 players around the league, including quarterbacks Justin Fields and Lamar Jackson, who have run for more yards than the 546 Tampa Bay has gained on the ground as a team.

The kicking game has been superb, with Ryan Succop going 22 of 24 on field goals. Rookie punter Jake Camarda has been outstanding, too, consistently impacting field position. He backed the Rams up Sunday with three punts of 66 yards or more, including a 74-yarder that matched the Bucs franchise record set by Sean Landeta in 1997.

Injuries and Ali Marpet’s retirement forced the Bucs to revamp the offensive line with young, unproven players who have struggled at times.

In addition to ranking at the bottom of the league in rushing, the passing attack has been out of sync at times because opponents have been able to generate pressure to force Brady to get rid of the ball quicker than he’d like to avoid being sacked.

Center Ryan Jensen, a first-time Pro Bowl selection a year ago and the first player the Bucs re-signed in free agency after Brady unretired in March, has been sidelined since the first week of training camp with a knee injury. While the team hasn’t officially ruled out the prospect of him returning at some point this season, there’s been no indication he’s anywhere near close to being ready to play, either.

Zero turnovers forced on defense the past five games, three of them losses.

After facing the Seahawks in the first NFL regular-season game played in Germany, the Bucs will have a week off before returning to action against the Cleveland Browns on Nov. 27.